One of the last places you might be prompted to think of Donald Trump would be during a revival of Oliver Goldsmith’s beloved 1773 comedy, She Stoops to Conquer. But that’s just what happens when young Charles Marlow, too shy when he first meets her to gaze upon the beautiful face of his upper-class betrothed, Kate Hardcastle, turns into a Trumpian chauvinist the minute he encounters her disguised as a barmaid. Thinking her an easy conquest, he seeks a kiss so quickly you half-expect him to begin popping Tic Tacs into his eager mouth.

This, of course, was probably not on anybody’s mind when the TACT company began rehearsals, nor does the production seek to exploit the scene for its topicality (although introducing some of those tiny breath mints would probably bring down the house); still, it offers a lesson in how old plays can often hang neon lights on issues in the news. She Stoops to Conquer, whose robust 18th-century language remains delightfully accessible, has historical importance as Goldsmith’s good-natured “laughing comedy” satire on the conventions of the “sentimental comedy” tradition. Nonetheless, one needn’t be concerned about academic issues when enjoying the near-farcical complications that give it its subtitle, “The Mistakes of a Night.” The play’s spirited characters romp through a tale in which young Marlow (Jeremy Beck) and another well-to-do young London gentleman, George Hastings (Tony Roach), travel to the country home of the wealthy Mr. and Mrs. Hardcastle (John Rothman and Cynthia Darlow). There they intend to seal their marital futures with, respectively, the Hardcastles’ daughter, Kate (Mairin Lee), and her cousin, Constance Neville (Justine Salata).

Kate’s mischievous bumpkin half-brother, Tony Lumpkin (Richard Thieriot), meets them first at an inn, where he pranks them with directions to what he says is another inn but is actually the Hardcastle home. Assuming the Hardcastles to be lowly innkeepers, Marlow and Hastings drive the befuddled Mr. Hardcastle to distraction with their condescending airs. Eventually, Marlow’s distinguished father (James Prendergast) arrives and order is restored.

Director Scott Allan Evans’s simplified production is presented on a nearly bare platform stage dressed by designer Brett Banakis with a few items of furniture and several potted junipers rearranged during scene changes. The actors, who smoothly effect the shifts themselves, establish right away that they’re just a band of players here to entertain us and that the enterprise isn’t to be taken seriously.

Minor background characters are covered by the principals, as needed, and the small role of Diggory is, distractingly, played by a shanghaied spectator manipulated from behind like a puppet by one of the actors. Such self-conscious antics are further heightened by the increasingly tired, Brechtian convention of having the cast remain visible on the sides as they wait to make their entrances. This isn’t the wisest of choices for a play whose plot may strain credulity but is kept alive by the warm-heartedness of its characters, in each of whom the audience must believe. Only now and then does anyone seem flesh and blood.

In keeping with the exaggerated theatricalism, Tracy Christensen’s mostly appealing costumes adapt modern clothing by adding 18th-century touches. More could have been done, though, to differentiate the fashionable Kate from the barmaid Kate. Unfortunately, the actress herself—despite an attempt to change her accent—comes up short in making the distinction between her above-and below-stairs characterizations.

The company plays with energy and joie de vivre; their British accents are well-tuned and their period behavior graceful. Their big problem is summed up by Hardcastle himself when speaking to Marlow and Hastings: “This is overacting, young gentlemen.” Too often the actors substitute style for substance, a particularly egregious example being when Marlow expresses his bashfulness with ridiculous St. Vitus-like shivers. Colorful acting doesn’t always translate into truthful acting. There are, though, several quality performances, among them the comically deft Darlow as the fretful Mrs. Hardcastle, and the adorably clownish Thieriot as Tony (despite an overdone bit toward the end).

I confess that the audience laughed more than I did. Perhaps a Tic Tac or two might have tilted the balance.

She Stoops to Conquer. Through November 5 at the Beckett Theatre in Theatre Row (410 West 42nd Street, between Ninth and Tenth Avenues). www.theatrerow.org/beckettnowplaying/ 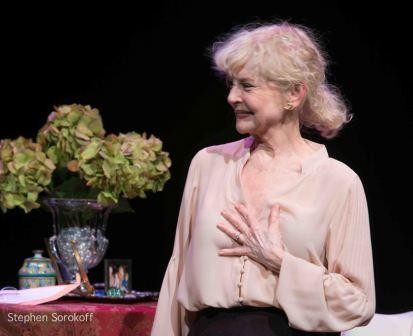