10 YEARS OF MUSICAL THEATRE HISTORY (IN SONG, OF COURSE) 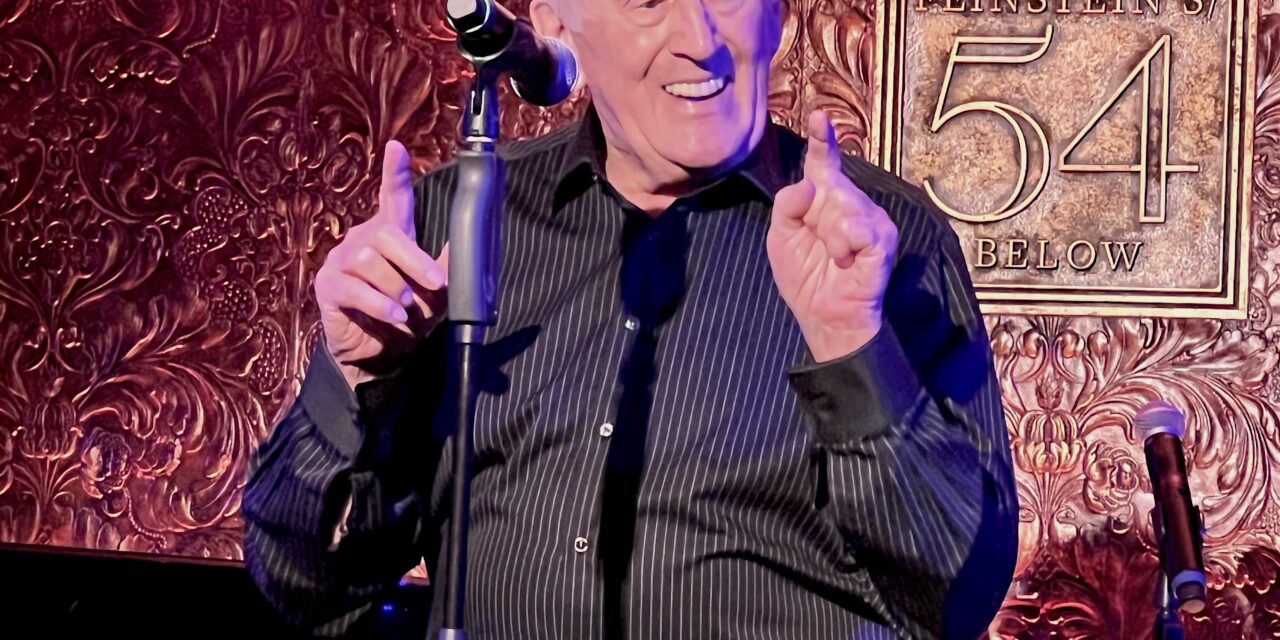 Continuing the theme of Feinstein’s/54 Below celebrating ten years of performances in their intimate underground space, producer/director Robert W. Schneider put together a night to remember. Two, in fact, as one was at 7:00 p.m. and the other at 9:30, each boasting star-studded casts consisting of more than a few Broadway legends. My experience at the 9:30 show (which uncharacteristically lasted till 11:30), was a total wow.

Not to age any of its participants prematurely, but there were over three hundred years of stage experience combined between half the featured players. Oh sure, there were younger men and women who performed, still in the early throes of their career. All shined (Rebecca Spigelman, Nate Irvin, Molly Stilliens, Christian Thompson and Sara Jean Ford), but there wasn’t a shred of doubt who the evening belonged to. Sharing the bill were Jim Brochu, Kecia Lewis, David Jackson, Walter Willison, Lee Roy Reams and Sweeney Todd himself, Len Cariou. The “youngsters” were well advised to get up and get off quickly in order to return to their seats and watch something of a master class on the tiny slip of a stage at 54 Below.

Opening with a song from The Music Man was Jim Brochu, Drama Desk Award winner for his one-man extravaganza, Zero Hour, a show he also wrote and in which he eerily brought the magnificent Zero Mostel back to life. Having a seventy-four-year-old sing about seventy-six trombones might have been the more geriatric way to go, but instead we got the tongue twisting “Trouble,” which Brochu sailed through. Probably performing it since he first saw the show at age eleven, he led an enthusiastic and unrehearsed audience, that helped kick the show off to a tremendous start by filling in as the chorus.

Walter Willison, nominated for a Tony Award fifty-two seasons ago for his role in the Richard Rodgers/Martin Charnin musical Two by Two, was able to shed the years away with little effort, singing two major songs he first introduced—and in their original keys! I had the pleasure of seeing him in that musical when I was a teenager, and as I’ve been listening to that cast album for decades, his channeling of his younger self offered a palpable thrill that inspired goosebumps. David Jackson, who appeared with Willison in the original Broadway company of Grand Hotel, sang two songs from that show, which included some marvelous scatting (well known, if you’re familiar with that cast album).

Kecia Lewis, a mere child compared to some of these other veterans, has still managed a thirty-eight-year career, having made her Broadway debut in the original company of Dreamgirls as the last of the Effie’s. She had the audience eating out of her hand with her audition story for Michael Bennett (after years of persistence phoning the casting director, the late Vinnie Liff, to “remind” him she was still available). Mind you, she was all of eighteen at the time. Singing Henry Krieger and Tom Eyen’s “I Am Changing” faultlessly, she also offered a version of “Green Eggs and Ham” from the Dr. Seuss musical Seussical, sharing the stage with that show’s composers Lynn Ahrens and Stephen Flaherty (Flaherty’s accompaniment on piano was a joy to behold).

Speaking of composers, Joe Iconis (Be More Chill) sang and played his own composition, a charmer called “Try Again.” And it should be mentioned here that Michael Lavine proved a versatile host for the evening, and even sang an early song by Stephen Sondheim titled “I Must Be Dreaming,” composed while he was still a student at Williams College in the 1940s.

The 11:00 o’clock spot went to Len Cariou, not only the recipient of the Tony Award for Sweeney Todd, as previously mentioned, but also nominated for his leading roles in Applause and A Little Night Music (all three of which won Tonys as Best Musical). At eighty-two, he sang a medley of songs from Stephen Sondheim’s Sweeney and Night Music that literally took the audience’s breath away. The voice isn’t as strong, naturally, but the actor in him rose to the occasion, with even the transitions between songs testament to truth and beauty when singer and songwriter are so perfectly matched (Sondheim wrote Sweeney with Cariou’s voice in his head). Mark Janas at the piano provided masterful accompaniment for the Sondheim arrangement.

At the very end, it was left to Lee Roy Reams who I first saw on stage in 1969 as Will Parker in a Lincoln Center revival of Oklahoma! Himself a fellow cast member of Applause, he told a beautiful story about his fifty-two-year friendship with Len Cariou and sang a witty medley from Finian’s Rainbow by Burton Lane and E.Y. “Yip” Harburg, with Alex Rybeck playing superbly at the piano. For the closer, Reams sang Gretchen Cryer and Nancy Ford’s “Old Friend,” which felt entirely appropriate to the proceedings.

And we sit in a bar and talk till two

‘Bout life and love as old friends do.

And tell each other what we’ve been through.

“10 Years of Musical History” was performed at Feinstein’s/54 Below, 254 W 54th Street, Monday May 2nd. For further information, please consult their schedule at https://54below.com/calendar/.