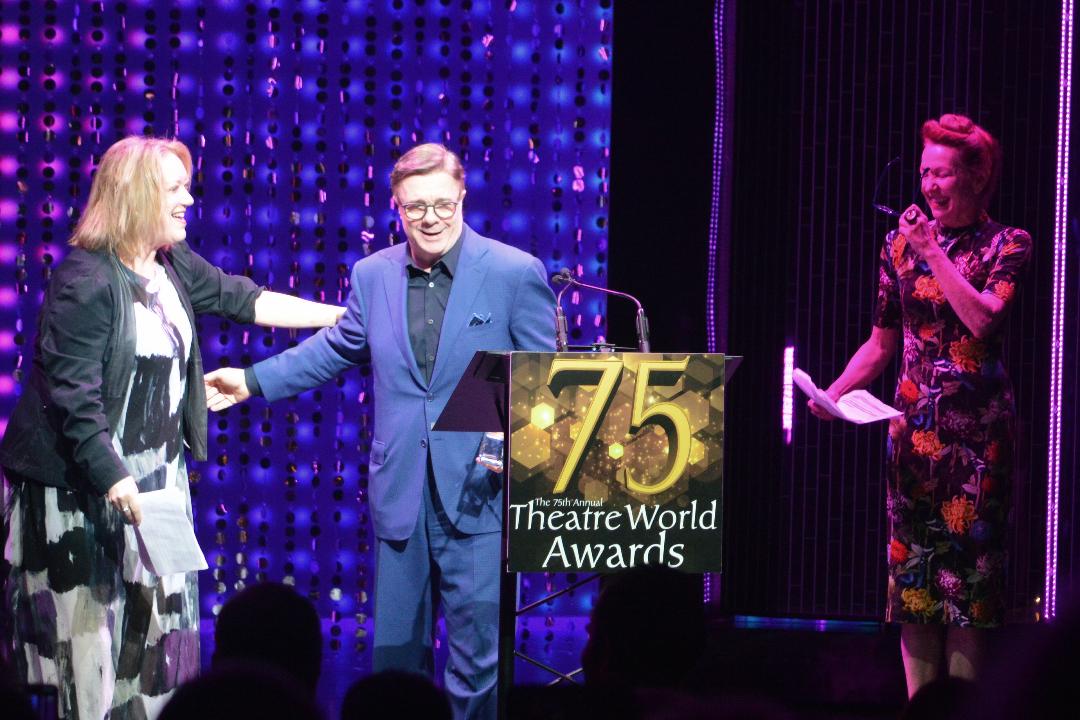 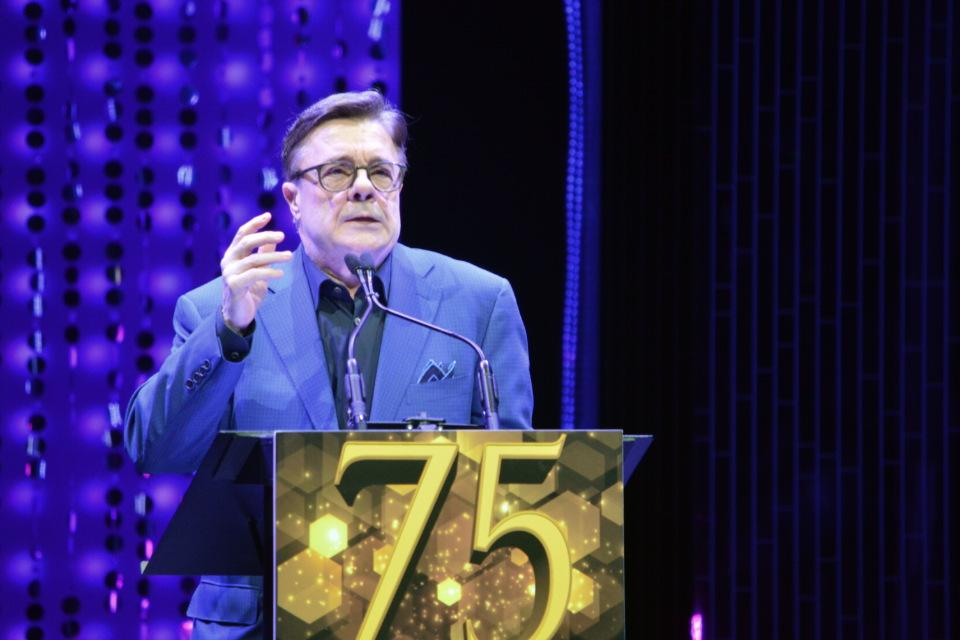 I personally always look forward to attending the Theatre World Awards (TWA), this year celebrating its 75th Anniversary, which is given to performers who debuted on Broadway as well as off Broadway this season, along with the John Willis Lifetime Achievement Award this year presented to the incomparable Nathan Lane. The TWA can only be given once to a performer and the tradition is to have a past recipient present to one of the newbies. And so, on the stage of The Cher Show (Neil Simon Theatre), the festivities began, hosted by the ever wry and amusing Peter Filichia whose job is not only to announce who, what, where, when, and give a little TWA history (did you know that there have been over 1000 TWA winners!) but also taking us back, back, back to Lysistrata aligning the political comparisons of then and now . . .  he keeps the audience laughing (for which he has a penchant).

The gorgeous deep sexy voice of Phillip Boykin filled the theater opening with “Some Enchanted Evening” morphing into parodied lyrics to “Can’t Get Enough of Your Love, Babe” as we shared the love of 75 years of Theatre World Awards.

The evening’s first award presenter was Danielle Brooks (who received her TWA in 2016 The Color Purple) who presented to long time friend Jeremy Pope (Choir Boy and currently Ain’t Too Proud...). He had all of three days between closing in one and opening in the other. They ate a lot of ice cream together waiting for their moments in theater history which they now celebrate royally.

Presenter Celia Keenan Bolger (Dorothy Loudon Foundation Award for Excellence winner in 2005 for The 25th Annual Putnam County Spelling Bee) presented to nightly cast-mate Gbenga Akinnagbe (To Kill A Mockingbird) who is involved in the Trayvon Martin sweatshirt brand. He had many words of praise for the Mockingbird team and the continuation of the vital conversation of social justice.

Charles Dale and Griffin Osborne (The Ferryman) read thank you’s from Tom Glynn Carney and Paddy Considine, both TWA winners for The Ferryman who are now back in London.

The ever lovable Rob McClure (currently in Beetlejuice & TWA 2013 winner Chaplin) presented to his stage-mate 17 year old Sophia Anne Caruso (Lydia in Beetlejuice) whom he describes as strange and unusual, but in a good way. . . she graduated high school at 15 and really pays attention aside from playing the guitar and writing songs. And she doesn’t care what anyone thinks! She’s quite adorable and made a stunning appearance in a short colorful sparkly bubble dress.

On The Red Carpet:

Lionel Larner (Executive Director, Dorothy Loudon Foundation) presented that special award for Excellence in Theater to Hampton Fluker for his outstanding performance in All My Sons followed by the wonderful voice of Ernestine Jackson (TWA 1974 Raisin) singing “The Love I Have for You” (Alberta Hunter) with just the right amount of sass.

From the last production of Oklahoma! (2002), Justin Bohon presented to James Davis who plays Will Parker in the newly reimagined version by Daniel Fish. Jim comments on the fact that he is just the opposite personality of his character, reminiscing about playing the role in high school in St. Louis where he vowed he has to get to New York City to be where his people are!

Nicholas Barasch won his TWA in 2016 for She Loves Me and had lots to say about the next award winner Micaela Diamond currently spending lots of time at the Neil Simon Theatre as Babe in The Cher Show. She’s now 19 and a year back when Jarrod Spector found out his scene partner was only 18, he was concerned. Micaela said that Cher’s note to her was be quieter but loud.

The one and only Linda Eder received her TWA 23 years ago in Jekyll & Hyde (1997) and was happy to present to another mid-western gal, Bonnie Milligan (Head Over Heels) who makes people laugh a lot and admits to being really hyper. Bonnie grew up in a double wide trailer and look where she is now!!

In 2013 we got to meet the amazing Ruthie Ann Miles when she won her TWA for Here Lies Love who was thrilled to present to TV’s Simone Missick for her role in Paradise Blue who likened her role as Silver to her grandma who travelled to Detroit to make a life describing her as the actualization of my journey.

Theater legend Rosemary Harris (TWA 1953, The Climate of Eden) presented to Colton Ryan (Girl From the North Country) who said his best friend was unable to attend and present to him but Colton couldn’t have been happier as he now has a new best friend.

Elaine Joyce (Sugar – 1972) was surely in the right place to make the next presentation talking at length about how she met her now deceased husband Neil Simon when she was co-starring with Robert Morse in Sugar and the fact that her TWA award was presented to her by her first husband Bobby Van. She was thrilled to present Stephanie Styles, the triple threat currently appearing in Kiss Me, Kate, who at the age of 4 saw the production in Houston, Texas where she grew up.  She’s one enthusiastic young lady.

A series on Amazon, Fleabag is a one-woman show written by and starring Phoebe Waller-Bridge who received her award from favorite Geneva Carr (TWA Hand to God 2012).

And then it was time for Mr. President – Dale Badway to emerge from beneath the stage in the colorfully lit, eye blinding dome that usually encompasses Stephanie J. Block when she makes her grand entrance as Cher nightly. Dale was reminiscent of Henny Youngman’s laughable one-liners, thanking everyone involved before presenting two of the funniest ladies now on Broadway Kristine Nielsen and Julie White, currently starring in Gary: A Sequel to Titus Andronicus, who proceeded (with lots of humor and panache) to offer up The Lifetime Achievement Award to their co-star Nathan Lane. Nathan seems to be getting worried about what this third Lifetime Achievement Award might represent! Probably the funniest and most poignant remarks of the evening came from the man himself (take a gander at the short video piece) with numerous standing ovations.

The evening came to a close with Linda Eder returning and singing “Someone Like You” to grand applause just before many in the audience left to continue celebrating at the Copacabana for the after-party.  Oh what a night . . . to be remembered for a long time.