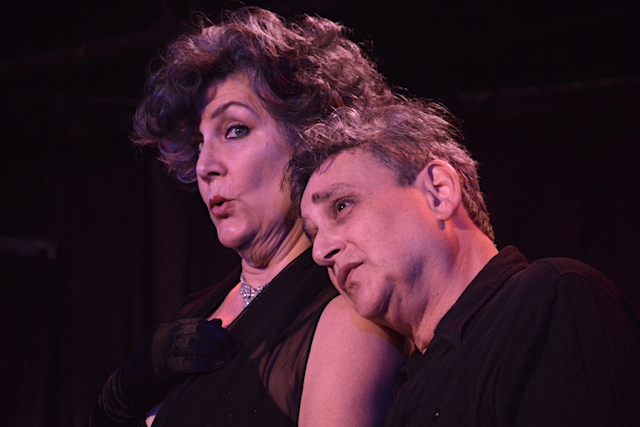 Our current Broadway musical superstars — Andy Karl, Bette Midler, Christian Borle, Christine Ebersole, Glenn Close, Patti Lupone– rightly deserve their names in lights, but you can bet your sweet confefe that equally superb performers, who haven’t or may never reach those heights, abound in New York City. The regulars cast in “Ricky Ritzel’s Broadway,” constantly elicit standing ovations at Don’t Tell Mama, Manhattan’s Cabaret Multiplex. Ritzel, the repertory company’s producer/director/arranger/interlocutor has, for the past two years, been dishing and deconstructing three 20th century musicals once a month. His patter is witty and interesting. His arrangements are first rate. His performers are usually out of this world. Enough share this opinion for Ricky to have won the 2017 MAC Award for the Best Recurring Series.

Ricky Ritzel’s May triumvirate opened with Irving Berlin’s Call Me Madam (1950), a satire about a billionaire widow made Ambassadress to an inconsequential European Duchy as a payoff for her consequential financial political support. Ethel Merman starred in the original. Ricky chose Kristine Zbornik as Ethel’s replacement. Zbornik’s voice is as powerful as Merman’s but Zbornik is a funnier, less uptight and natural clown. The tricky lyrics Merman uttered as though they’d traveled from her lungs to her lips without passing in her brain, Zbornik delivered with an appreciation for the cleverness of their melodies, rhythms and rhymes, as in this couplet:

So the priestess with the leastest protocol

Is the hostess with the mostest on the ball. Aiding Zbornik and adding sweetness was the inimitable Sidney Myer as an eager young diplomat. Unsure of the lyrics to the second verse of “It’s A Lovely Day Today,” Sidney produced a miniscule crib sheet at which he glanced from time to time without breaking his connection with or ever taking his eyes off the audience for more than a nanosecond, thus giving Berlin’s lyrics the attention they deserve. In Sidney’s duet with Zbornik, their joyful harmony was simply grand. But the high point of the set was the duel between Zbornik as Zbornik and Zbornik as Merman singing “The Best Thing for You Would Be Me,” which concluded with a victorious Merman declaring, “It’s so good to be alive again!” Big, the Musical (1996) was an adaption of a film starring Tom Hanks as 12- year-old Josh Baskin who overnight acquired a 30-year-old body when his wish to be “big” was granted by a Zoltar Speaks machine at a carnival. Big was a major money looser despite a book by John Weidman and a score by Shire and Maltby. Ricky saw “Big” on Broadway and did not remember one song from the show, but he found several memorable, maybe even extraordinary tunes with great lyrics and toe-tapping rhythms when he re-evaluated the score. These songs were exquisitely sung by Jon Satrom with an expression of total pre-teen innocence on his face. Tara Martinez, as the love interest toy company VP of Marketing that hired Josh, gave grown-up significance to the lyrics of “Stars, Stars, Stars,” and recalled her age 13 self in “Dancing All the Time.” Lisa Viggiano gave me Goosebumps as Josh’s mother asking time to stop so she can hold on to her son. Satrom, Martinez and Viggiano are not only wonderful singers but also superb actors. The last featured show, Applause (1970) involved great creative credentials — Betty Comden & Adolph Green, Charles Strouse and Lee Adams – and was based on the iconic film, All About Eve, but had problems. 20th Century Fox wouldn’t release rights to the script or the title of the film. The creatives got the rights to the story on which the film had been based and overcame. Lauren Bacall cast as Margo Channing, won a Tony for best female musical performer, but I just listened to the original CD and OMG! Bacall had a three-note range and could barely carry a tune. The other nominees competing with Bacall must have been crows! The songs supported the plot or defined a character, and many had properly cynical lyrics, but they were not among Strouse and Adams worthiest works. Aaron Morishita, as Margo’s boyfriend Bill Sampson, wound his way finely around the “Smashing, NY Times” mocking lyrics about the words actors need most. Tara Martinez, this time as that @#$%^&^* Eve, was touching, describing her horrible life at her home, sweet, home, which like everything else she said was probably a lie. Charlotte Patton, as Margo, delivered a rousing opening with “But Alive,” but she had three other songs on her list, and she sang two of them without taking her eyes off the words on a music stand. Singing these songs without clarity or feeling, or looking at the audience, put a damper on the evening. It was disrespectful to Ricky, the audience and the spirit of Margo Channing.

Next Month on Friday night June 30th at 7 pm Ricky Ritzel’s Broadway will present Evita, Godspell and On The Town at Don’t Tell Mama. Psst! Jon Satrom will be playing Che in Evita. In the interim John Satrom and Tara Martinez are employed in Don’t Tell Mama’s piano bar. Tell no one this information came from me, or I will be forced to twitter an immediate denial.