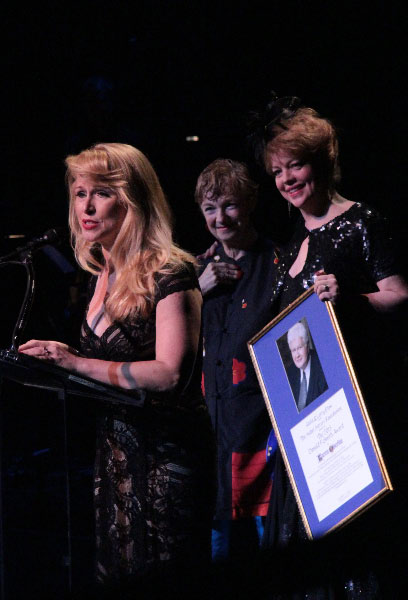 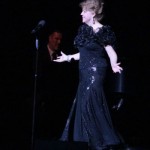 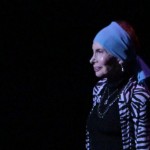 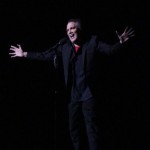 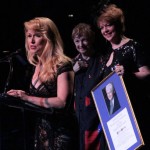 Opening night at the Mabel Mercer Foundation 24th New York Cabaret Convention (October 7) at Jazz at Lincoln Center was an evening of some spectacular highs but some disappointing lows.  Hosted by artistic director KT Sullivan on founder Donald J. Smith’s birthday, it was a strange evening overall but the good parts were terrific.  KT is doing a wonderful job keeping Donald J. Smith’s legacy alive.

Sullivan opened with a terrific version of “De-Lovely” with some very special lyrics.  There was a big band on stage but most of the artists were accompanied by Jon Webber at the piano.  The ageless and wonderful Barbara Carroll did two great numbers which were a tough act to follow.  She sang the first stand up, and the second at the piano and everything was rhapsodic.  Then award winner T. Oliver Reid, who is going into the Broadway run of “After Midnight,” demonstrated what a spectacular talent he is with two excellent numbers   Rebecca Lowin, the winner of 54 Below’s contest, sang two wonderful ballads.  I have only seen her do tongue twisting novelty numbers via video but she proved she is very skillful at ballads as well.

The Donald Smith Award was presented to Karen Oberlin.  Looking stunning in a very smart gown, she proudly accepted the award which included a check funded by Adela and Larry Elow who were asked to stand up and be applauded.  Karen then sang some standards and she has the ability to make the familiar seem new; it’s as if you never heard them before, and she always includes the wonderful verses.  In her maturity, Oberlin is better than ever.

Aaron Weinstein was a riot describing the psychological meaning of music and he proved his metal by playing “Somebody Loves Me” and “Some One To Watch Over Me” on his violin.

Sullivan and her partner in the “Vienna To Weimar” show, Karen Kohler (Kohler in tuxedo), accompanied by Jed Distler at the piano first sang the amusing “Attila The Hun” number from that show.  They spoke about Frederic Hollander and how he had to escape Germany and landed in Hollywood.  The first song he wrote in Hollywood was a lament about what was happening in Germany, the chorus of which was “Free Free Free.”   It was a stunning performance and would have been a good first act closer.

However, we got a very special treat from Charles Busch.  Busch did a very moving “My Ship” singing purely and emotionally.  Then he talked about a song that meant a great deal to him, because when he was doing his first hit show “Vampires in Sodom,” off Broadway, the cast would go to a dive bar and the song means more to him today than it did then, especially because some of the people in that production have died.  It was the big hit of Mary Travers based on a Russian melody, “Those Were The Days” and he got the audience to sing and clap along with him on that great song –  a terrific first act finish!

The second act opened with the return of Kohler in a smashing red dress and with Distler at the piano she sang a song entitled “God Is In Our House.”  It was a downer, about all the pillage and crime and brutality outside on the streets but her house was protected because God is in her house.

Emily Bergl, who has won every award for her previous shows, also sang a very depressing song, Brittany Spears‘ “Toxic.”  Then she did an accented monologue about a man setting her up in a penthouse and deserting her as he traveled.  She kept this strange accent while singing “Down In the Depths” and I was very disappointed because it was an unfortunate choice.  I’m in love with this woman and all her previous shows but I was uncomfortable with her selections.

Multiple Tony nominee Gregg Edelman sang a very strange song about “Love Me, Love Me, Love Me” which was also a disappointment.  However, he redeemed himself in a glorious “In The Still of the Night,” which he began with the bridge lyric, “Do You Love Me..” and then sang the entire song with great passion and feeling.

Spider Saloff came out in a strange costume with a fruit laden turban and sang “The Boy From” the Mary Rodgers-Stephen Sondheim song introduced by Linda Lavin in “The Mad Show.”  I think it’s about time to retire this song.  Her second song with special lyrics was a slow “There’s No Business Like Show Business” including some special lyrics she wrote herself.

Fortunately, there was a great performance by Eric Yves Garcia accompanied by Weinstein of the Richard A. Whiting-Leo Robin song “My Ideal” which was introduced by Maurice Chevalier, one of the first recordings by Whiting’s daughter Margaret.  Garcia was presented with the first Margaret Whiting Award.  Whiting’s daughter, Debbi Whiting, told about previous Johnny Mercer awards, decided that she would now fund a Margaret Whiting Award.  Garcia was introduced to KT Sullivan and Debbi Whiting when Stacy Sullivan first saw him at his regular gig at Chez Josephine.  Whiting’s presentation was quite moving.  And just before Garcia performed his second selection at the piano, KT asked Whiting if her mother would have liked Garcia.  Whiting’s comment was priceless:  “She would have married him!”

The closing act was Carole J. Bufford, whose current show “Body And Soul” is playing several return engagements at the Metropolitan Room.  The elegant Bufford did two numbers from that show, closing with a wonderful “Can’t Help Loving That Man.”

*More to Come on the Convention Nights