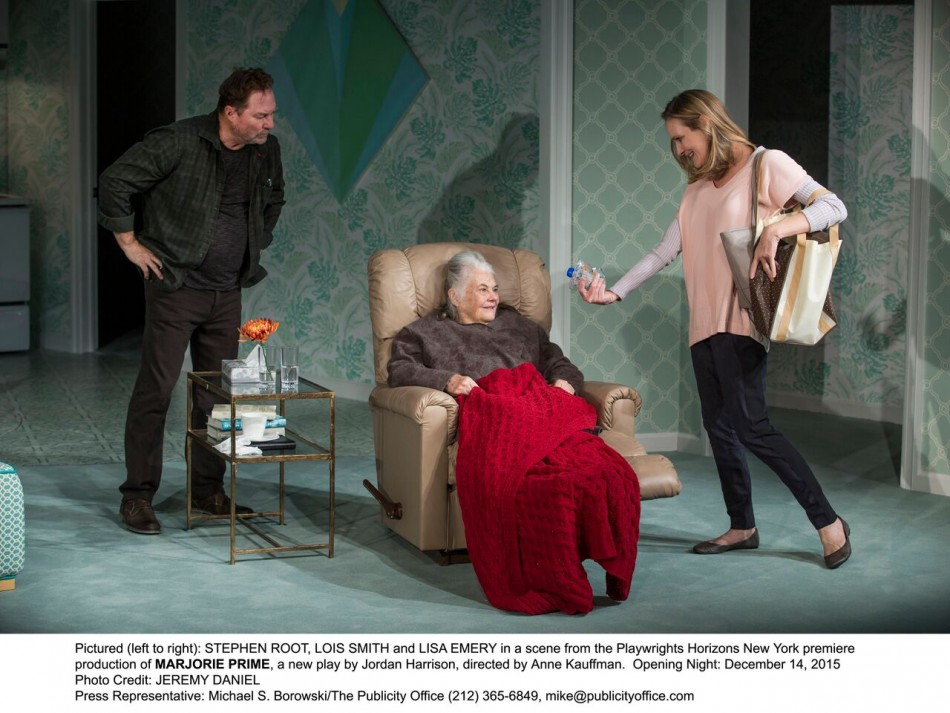 A senescent coquette, somewhat irascible, confused by the vagaries of life. That would be the indomitable Lois Smith as Marjorie Prime in Jordan Harrison’s eponymous comedy-drama at Playwrights Horizons.

Not that Marjorie consistently displays all those qualities. Her irascible self, for example, makes appearances only in cameo. Yet fleeting though they may be, they’re not easily forgotten. And when she’s flirtatious, watch out. That sixteen-year-old in the body of an octogenarian is irresistible. Slightly addled but sharp in her own way, Marjorie may be old and fading, but she’s someone to be reckoned with. As is Smith, who is certainly not fading or, chronology notwithstanding, old. 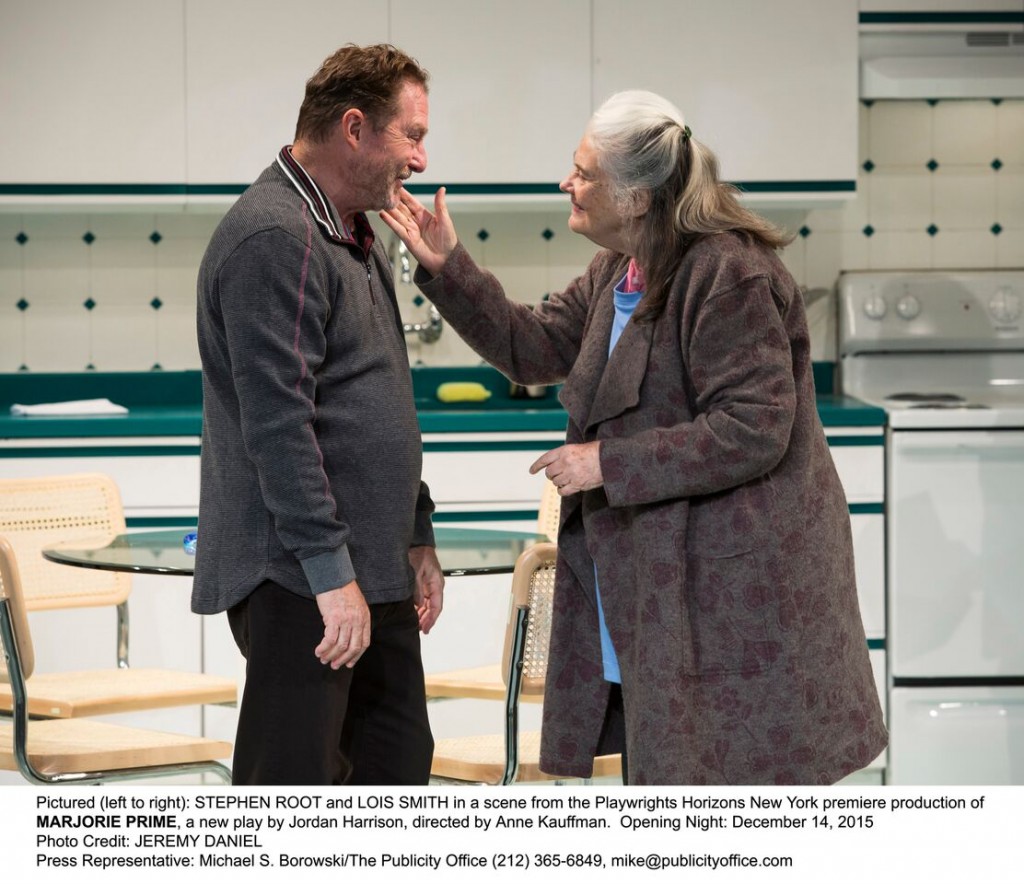 Marjorie Prime uses a “Prime” – a form of artificial intelligence – to keep dying Marjorie company in her daughter’s suburban-looking living room. Championed by her son-in-law Jon (Stephen Root), against his wife’s wishes, her constant companion (when no one else is around) is her late husband Walter (Noah Bean), or rather a Prime playing Walter in the flower of youth.   He entertains her with reminiscences of their marriage, recycling information he’s been told by Jon.

Marjorie and Jon can both see Walter, but Marjorie’s daughter, Tess, cannot, or perhaps just doesn’t want to. When she’s around he retreats to the sofa on the side of the stage.

Bean is terrific as Walter, never robotic but always modulated and even in tone and movement. He doesn’t sugar coat but his delivery is calm and soothing. He’s kind but not quite sympathetic: the voice of reason in a handsome young package. Root makes a fine Jon. Looking like a guy you might expect to meet in a bar, he’s rational, practical, and perceptive.

As Tess, Lisa Emery is more of a worrier than her mother and less even-keeled than her husband. Tess means well, but her execution is cloying and annoying. She’s concerned about her mother’s falling (which she does) and having bladder accidents (which she also does). Tess wants to take care of her, but it’s more out of duty than love. She doesn’t really connect with her mother, as much as she wants to. Emery, always solid, delivers a no-nonsense portrayal of a no-nonsense woman you wish would just relax a little. Tess strives to be patient and loving with her mother, but her affect is always shaded with brittle nuance.

The interaction of humans and Primes (whose number seems to increase with death) is surprisingly gripping. Harrison keeps us guessing as to who’s dead and who’s alive, and the exchanges between the two are surprisingly revealing.

Ben Stanton’s lighting is marvelously integrated into the story-telling. He creates the appropriate mood throughout but it’s toward the play’s end he and his lighting really shine. Most striking is how he draws us in with beautifully and diversely lit tableaux vivants. A series of frozen vignettes provides potent nonverbal narrative.   Stanton also uses and diffuses spotlights in a way that’s gentle but effective.

Anne Kaufman directs with a steady hand. Even scene changes are well orchestrated. Semi-darkness predominates. We can see the stagehands but we can’t see them well, reflecting the blurring of light/life and death/ obscurity at the heart of the play.

A Pulitzer Prize finalist, Marjorie Prime dips a little toward the end but bounces right back. It raises all sorts of questions about that most basic of topics: life and death. It answers none of them, observing and imagining but offering no pithy answers. After all, what is there to say? 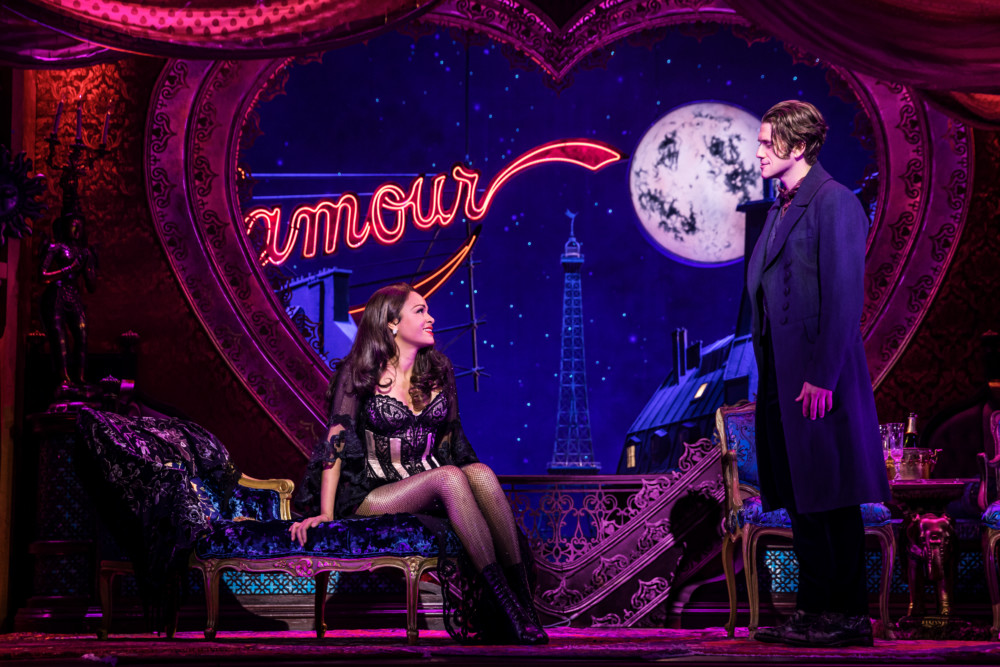 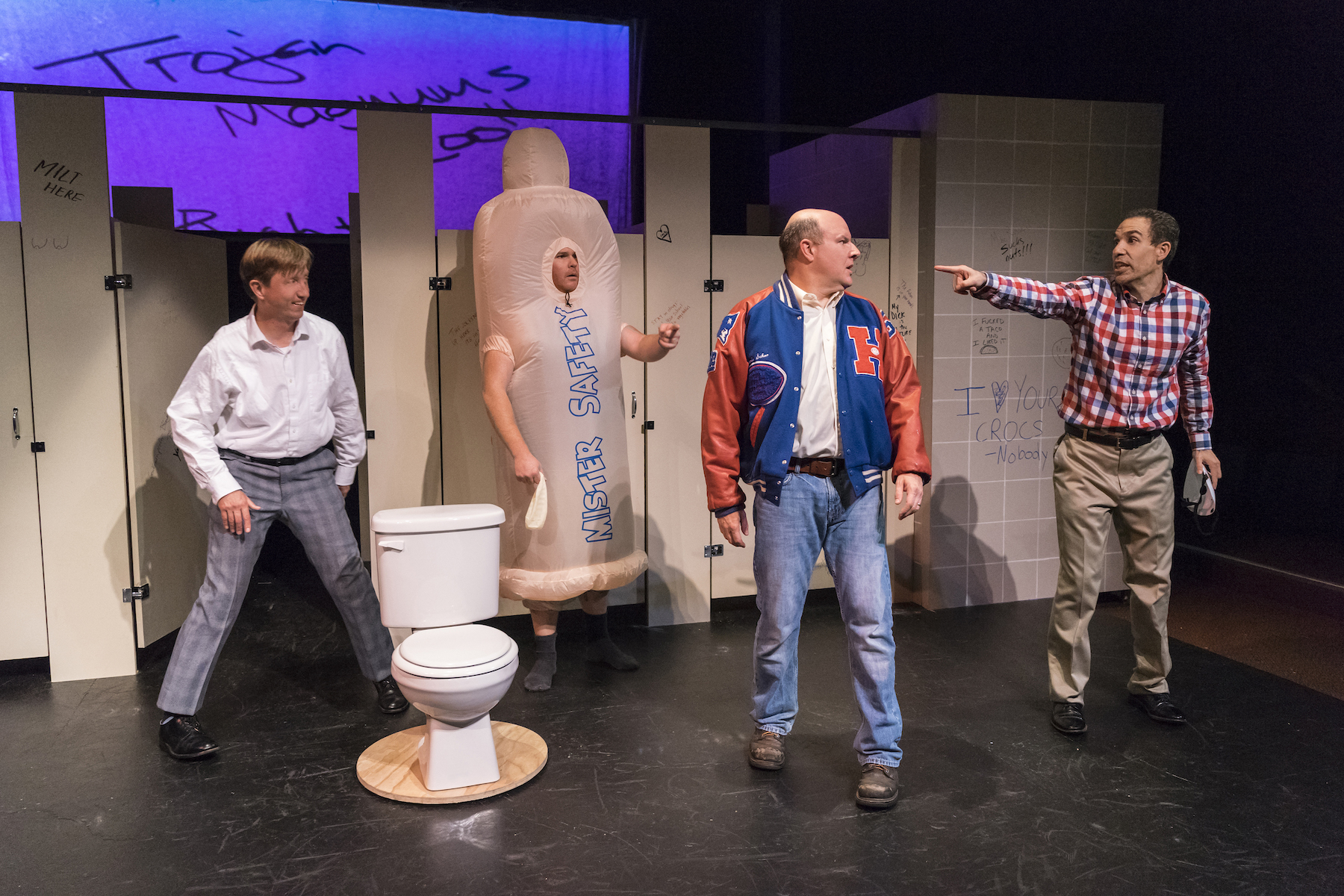 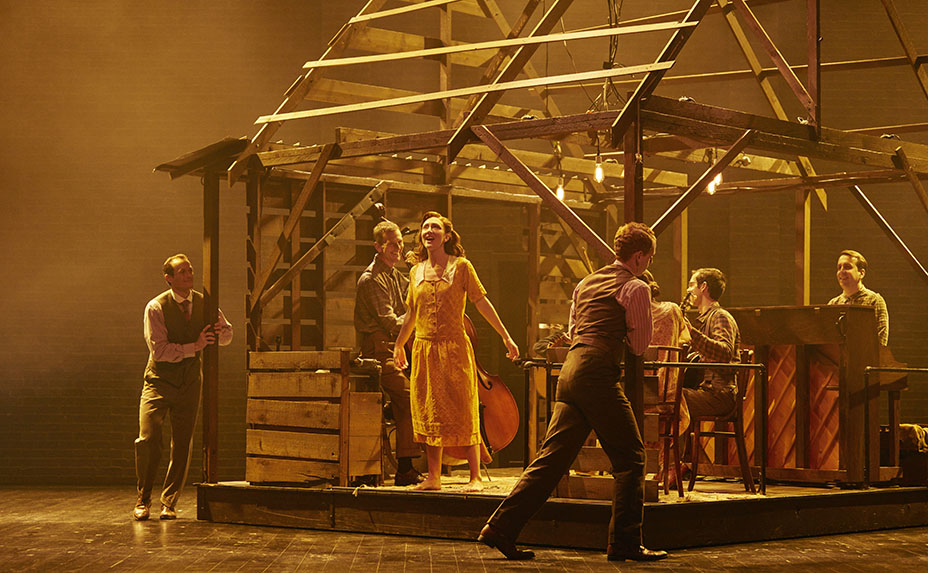