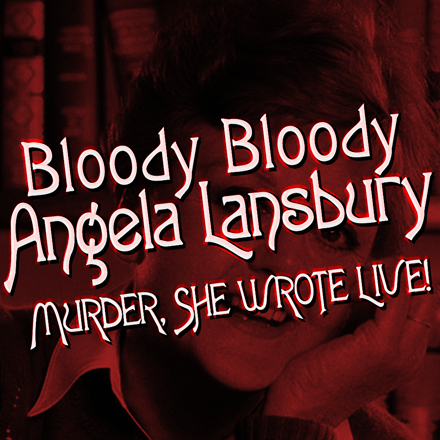 What better idea for a musical than letting Dame Angela Lansbury be a diva–headlining her own show! You say she’s 90 years old and unavailable to perform? Well, there are good, campy ways around that!

Feinstein’s/54 Below has presented a semi-staged concert based on the hit TV show of the 1980s-90s, Murder, She Wrote. By using conventions from the TV series, with some added-on surprises, the concept allows all sorts of inside jokes, political incorrectness, plus the usual “whodunit” plot that gives the show its center.

With a book by Kevin Zak, Phillip Taratula, and Josh Lamon, and a score by Keith Varney, the show moves quickly from the opening. Dan Knechtges utilizes the small stage well by placing the actors front and center, but giving them room to work the stage. A three-piece combo is positioned to accompany, but not upstage them.

Once the band plays the opening theme (to the amusement of the audience), actors enter the stage in costumes from the era, and the vibe of Cabot Cove, Maine is set. Officer Tom Bosley, Dr. Seth Hazlitt and others are then introduced. The actors have music stands and are on book, but know the material well. The opening ensemble number “Someone Dies” is a lively exposition of every Murder, She Wrote TV plot ever written, calling out the absurd ways Jessica Fletcher solves mysteries in Cabot Cove.

Although we haven’t met the woman of the hour, Angela Lansbury, yet, Chip Zien (Into the Woods/Falsettos) makes a surprise appearance as Mr. Drake. His character is the one that ultimately meets its demise, setting the plot in motion. Finally, Kevin Zak as Jessica Fletcher makes his/her appearance. His performance is broad, but respectful to the essence of Ms. Lansbury. Her Emmy Losses and Tony wins are mentioned throughout the show, giving her the accolades she deserves.

The music and lyrics quickly move the action forward and all the performers get a song to sink their teeth into. Sarah Stiles (as the niece Veronica) sings a showstopper called “She’ll Get You Off” that showcases her impressive vocal range. The song is about Jessica’s Fletcher’s ability to exonerate her nephew . . . with the obvious double-entendre.

Mr. Zak sings “I Am Qualified,” a patter song that lists all the forensics and crime-solving Jessica Fletcher can do, even though her only real training is having written one novel. Mr. Zak gets several great numbers, including “Angela Lansbury Will Never Win an Emmy,” about just how unappreciated Ms. Lansbury was as a TV star. Mr. Zak even got the audience to sing along without any prodding!

The show’s true highlight was the trio of John Treacey Egan, Kevin Zak and Josh Lamon, who performed the song “Helen Keller.” This is most definitely the 11 o’ clock number. The counterpoint of Mr. Egan’s legit tenor and the belt of Mr. Lamon, while Mr. Zak played the straight “woman” was hysterical and technically impressive!

Bloody Bloody Angela Lansbury is a perfect parody piece which should become a regular show on the Feinsteins/54 Below’s roster. There were a great many inside jokes that most of the crowd responded to and could easily translate to other nightclubs, with some jokes changed. The politically incorrect humor made me wonder, however, if it could actually play in a mainstream arena: Bill Cosby, Bernie Madoff, and “mentally challenged” jokes seem risky. In any case, the crowd seemed to embrace it all and gave the performers a rowdy ovation at the end. Kudos to the talented writers and performers!