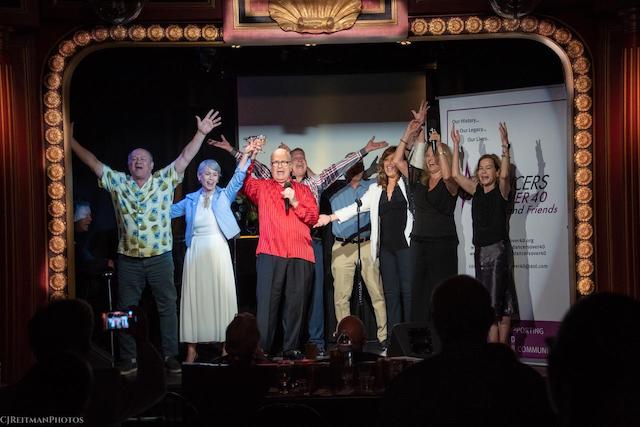 On August 24, 2022, Dancers Over 40……and Friends presented “The 42nd Anniversary and Reunion of the Cast and Crew of 42nd Street” at The Triad.Theater. The show was based on the 1933 hit film with music by Harry Warren, Lyrics by Al Dubin and Johnny Mercer. The  book by Michael Stewart and Mark Bramble and produced by David Merrick.

It was a warm and wonderful celebration hosted by Lee Roy Reams who was not only a member of the original cast, but worked with Gower Champion on the creation of many of the musical numbers. It was thrilling to hear many of the cast members share their memories and reminisce about their audition, and how being cast in the show changed their lives. Some were still in high school, others taught in dance studios, and the chance to audition for a legend was a great opportunity. It was universal how they all talked about working with Gower Champion, and how much he was loved and admired. They shared how respectful he was of those who showed up to audition and shook each dancer’s hand to thank them for being there.

Fred Barton, the Music Director, opened with a terrific piano overture of the songs from 42nd Street. The President of Dancers Over 40, John Sefakis, told us about this non-profit organization that “provides a community of support in response to the many needs of mature dancers, choreographers, and related artists.” 42nd Street opened on August 25, 1980 at The Winter Garden Theater, the birthday of Ruby Keeler who had starred in the film, but it was also the 80th birthday of our host Lee Roy Reams. John brought a cake to the stage and while Lee Roy blew out the candles, we all sang Happy Birthday to him, and he then performed the title song from the show.

The cast and crew members in attendance were Karin Baker who was Director/Choreographer Gower Champion’s assistant, Steve Zwiegbaum, the Production Stage Manager, Arturo Porazzi, Stage Manager, and cast members Carole Banninger (who played 3,789 shows and never missed a performance), Linda Carelli, Denise DiRenzo, Cathy Greco, Tony Parise, Lars Rosager, Nikki Sahagen and Alison Shreve. Josh Ellis served as the Press Agent for the nearly nine year run, but not the first five weeks, as David Merrick, the producer, fired the first one and asked Josh to take over. Everyone came on stage to sing “Getting Out of Town” and that led to many talking about the creation of the show, the changes, and how the show took shape out of town.

The highlight of the evening were some film clips from the show. There was a spectacular musical number with Jerry Orbach (Julian Marsh), Wanda Richert (as Peggy Sawyer), Roy Reams (Billy Lawlor) and the entire cast singing and dancing to “Lullaby of Broadway.” Another remarkable number was a performance of  “We’re In The Money” performed at West Point hosted by Bob Hope with the large and talented cast dancing on large coins and Lee Roy’s incredible solo number.

It is a well known story that on Opening Night, after 15 enthusiastic curtain calls,  Merrick came onstage and made the announcement to the stunned cast and audience, “This is a very tragic moment, as I am sorry to have to report that Gower Champion died today.”  He had asked Champion’s family to withhold the news from everyone, including the show’s cast, until after the opening performance. Champion’s career had gone from dancer, to becoming a great director/choreographer with such hits as Hello Dolly, Bye Bye Birdie, Carnival, I Do, I Do and many others, and he left a remarkable legacy as we can see from those who worked with him and experienced his genius.

Thanks to Dancers Over 40 for putting together this very exceptional evening honoring the 42nd Anniversary of the very special cast and production team of the Broadway Show of 42nd Street.