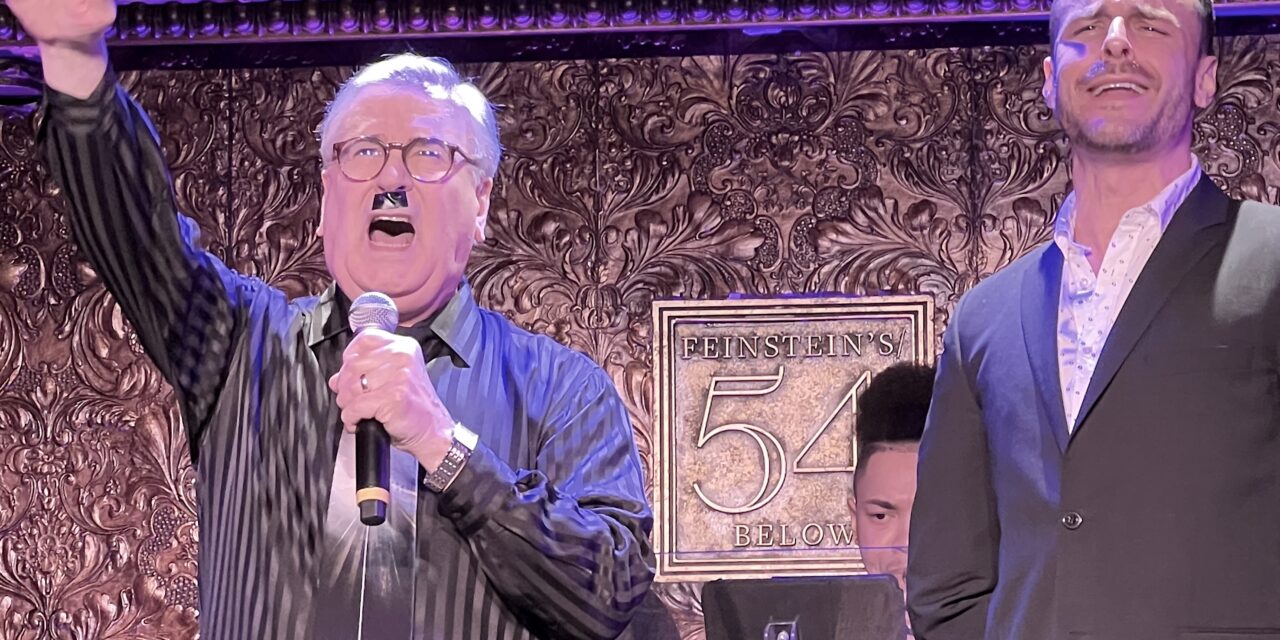 When I first heard that some of Broadway’s best performers were going to put on a salute to Mel Brooks’ film and theatre songs at Feinstein’s/54 Below, I was all in. Sure, the tunes that Brooks has spun over the years aren’t Cole Porter or Stephen Sondheim, but his words and music have a touch of Irving Berlin, a dose of Jerry Herman and a lot of Jule Styne when he collaborated with Betty Comden and Adolph Green. That’s some fine company and even though Brooks can’t read or write a note of music, neither could Bob Merrill, Lionel Bart or the jazz pianist Erroll Garner, among other greats. It takes an evening like this one to realize that Brooks has contributed marvelous additions to what makes the Broadway sound so unique and so pleasurable, especially when presented in a fashion such as this one with love and respect.

Having already been produced once before at 54 Below two years ago, this new edition featured almost an entirely new cast with a different set list. I didn’t see the first one but, if it was anything like this, I’m sure it was sensational. As it stands, I consider last night’s “54 Celebrates Mel Brooks” the best minimally rehearsed show I’ve ever seen on that stage. That’s not a slam by the way, as “minimally rehearsed” is a statement of fact. Sometimes the actors are reading the lyrics off music stands, or doing material for the very first time, fortunate if they’d had the chance to run through it once with anything other than piano accompaniment. The dedication of this random team of Broadway professionals was very special and made for mind-blowing entertainment.

The night was hosted by one of the most charming and talented people in the New York theatrical community, Lee Roy Reams (himself a veteran of Brooks’s The Producers, when he played Roger De Bris during the show’s six-year run), who set the required irreverent tone. I found it difficult to believe that I had first seen him in Oklahoma! in 1969 when I was twelve years old and that he is STILL killing it! His rendition of “Heil Myself” (Hitler mustache and all) was beyond hilarious.

First up was Sam Gravitte (currently Fiyero in Wicked) belting out “I Want to Be a Producer” with such force it could probably be heard three blocks away at the Gershwin. He was followed by the amazing Andy Karl, who serenaded the title song from Blazing Saddles with his usual brio and expert comic timing. Alexandra Silber channeled the legendary Madeline Kahn (baby talk “r” and all) as Lili Von Shtupp singing “I’m Tired” with enough laissez-faire to fill a stadium. A trio of “Men in Tights” forcefully sang that film’s robust title song (Damon J. Gillespie, Fergie L. Philippe and Phil Sloves), but it was Adam B. Shapiro in drag as Maid Marian (clad in chastity belt) who nearly stopped the show.

The always wonderful John Bolton and the delightful Chad Burris were together to sing “Together Again for the First Time” from Young Frankenstein, Bolton having recently been in that show at the Ogunquit Playhouse in Maine last October. At this point, I was a broad ear-to-ear grin experiencing showstopper after showstopper. But as commercials always say – “wait, there’s more!”

Next up was Annie Golden, who I’ll never forget when she first came to my attention in the film of Hair forty-three years ago. She sang the title song from High Anxiety to comment on Covid, complete with protective gear from head to toe, earning each of her many laughs with ease. Nik Walker (with fine backup) held forth with “The Inquisition,” one of Brooks’s funniest numbers (which is saying something) and Major Attaway (long time playing the Genie in Aladdin) gave a terrific rap rendition of “It’s Good to Be the King” (both from History of the World, Part One). And “Putting on the Ritz” was performed by Preston Truman Boyd (the Monster) and Jelani Remy (Dr. Frankenstein) who simply knocked it out of the park vocally and comedically.

It then fell to Emma Degerstedt to perform “When You’ve Got It, Flaunt It,” as pure a female showstopper there is. She sang her heart out and filled the song with every bit of movement the small 54 stage can hold. As the penultimate number, “Springtime for Hitler” fit the bill with Eric Ulloa’s ripe tenor ringing every juicy note out of the song. And, as previously mentioned, Lee Roy Reams brought the house down with his singing and (yes!) dancing. At seventy-nine the man’s got moves!

To end the night, Adam B. Shapiro sang “Hope for the Best/Expect the Worst,” a song from The Twelve Chairs, Brooks’s follow-up film to The Producers. The song then transitioned to “Till Him,” the lovely ballad Matthew Broderick once crooned, this time done as a tribute to Mel himself (who appeared in a series of slides on the screens adorning both sides of the stage). It ended the evening on a sentimental note after an hour’s worth of pure hilarity. Perfect.

As one final afternote, the woman I shared my table with was visiting from Dayton, Ohio and landed at Feinstein’s/54 Below not really knowing what the entertainment was going to be. She then professed to me in a whisper midway through the show that the whole time she’d been watching, she had Mel Gibson’s face in her mind. She only realized it wasn’t him when the first photo of Mel Brooks showed up on screen. As funny as the whole show was, THAT was really hysterical!