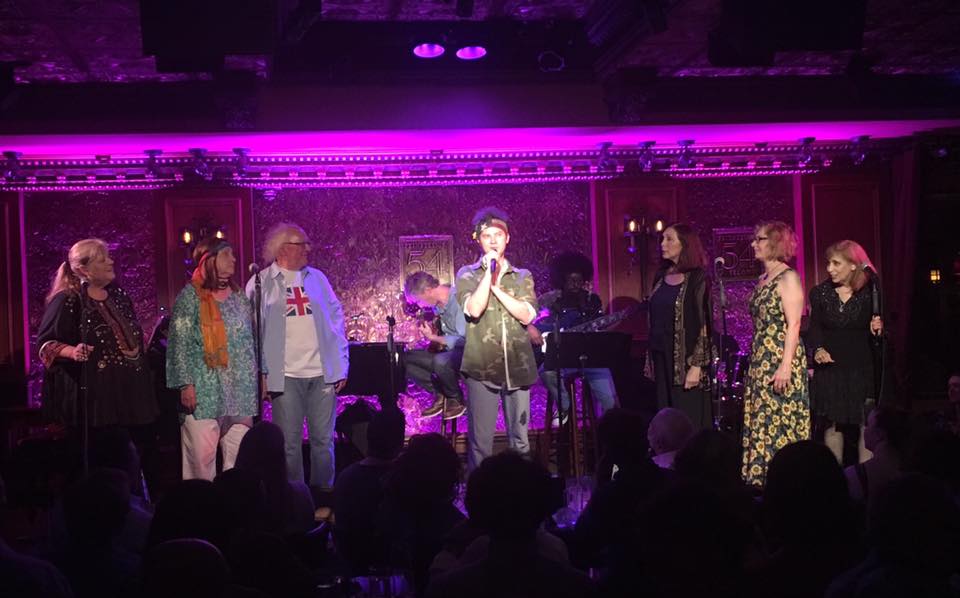 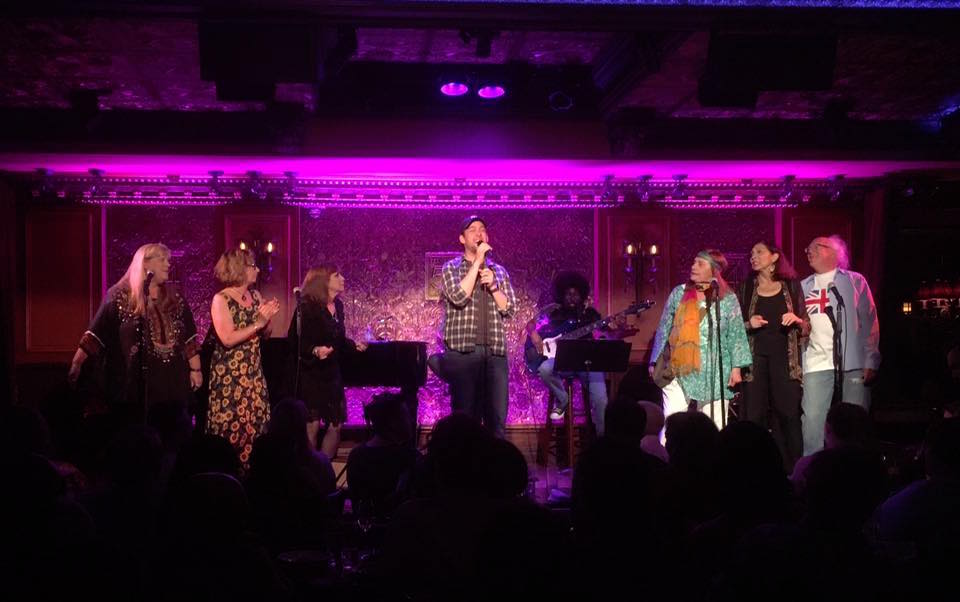 We let the sunshine in, and basked. For two concert performances on a recent Sunday night, several tribes assembled that were associated with American’s original tribal rock musical Hair. Veterans of the 1968 Broadway and 1977 and 2009 revival casts of the musical-born American counter cultural classic crowded the 54 Below stage in waves of countercultural nostalgia. And it was delectable.

Jack Kroll in Newsweek described the original 1967 Off Broadway run of the show, with music by Galt MacDermot and Lyrics by James Rado and Gerome Ragni, as “free-form” and “plotless” and yet it ignited “the key images and issues of the lost-and-found generation – youth vs. age, sex, love, the draft, race, drugs.” (Newsweek, November 13, 1967) And all these years later, in its almost bookless, let-the-songs-tell-the-story fluid structure, the songs of Hair communicated powerfully in a concert format. The Viet Nam War and draft dodging and East Village love ins, the world outside the then-new Public Theater, came onto its newly refurbished stages on Lafayette Street. The original 1967 had a six-week run then continued on Broadway and ran from April 1968 into July 1972, and has been revived on Broadway four times (1977, 2004, 2009, and 2011).

At 54 Below, music director Michael Holland on piano, Thad DeBrock on guitar, Carl Carter on bass, and Donna Kelly on drums created the musical backbeat, and the performers from several generations carried the tunes and crafted the world.

“Aquarius” opened the show as it must – “look around” and feel the dawning of a new day and a new musical form, bursting with youthful optimistic energy regardless of the age of the performer embodying the story of any particular song. Max Chernin, who debuted earlier this year in Broadway’s Bright Star, crafted a simply, powerful, evocative directionless youthful anthem “Where Do I Go?” – “Why do I live, why do I die? Where do I go? Tell me why?”

Antwayn Hopper, member of the 2009 revival cast tribe, killed with his delivery of “Colored Spade” – “Flat nose, tap dancin’ resident of Harlem.” And the delicate and full-throated “Good Morning Starshine” was a gift from members of the 1968 cast led and delivered by Emily Bindiger, tribe member of the 1977 revival cast. A hopeful tune that marked a generation – “Good morning starshine, the earth says hello, you twinkle above us, we twinkle below.” The generous spirit of the enterprise was, and is, contagious.

A dreamy driving dropout song, “Manchester,” was performed by Allan Nicholls and the 1968 cast. Natalie Mosco, with a group of women from the 1968 and 1977 casts, extolled the wonders of “Black Boys” after Natalie spoke of premiering in the show when she was just 17 years old – balancing working as a ballet dancer and a story of “getting the nod from Rudy” (Nureyev).

There were stories of cast disrobing, everyone but Diane Keaton in the 1968 Broadway cast, and her replacement Heather MacRae – who delivered a smashing, late-in-show solo turn with “Easy to be Hard.”

A diehard fan, who had seen the show 88 times in 13 cities, celebrated his birthday with the first 54 Below performance and was introduced in his tie-dyed ensemble, perfect for the occasion. As one performer noted about Hair in all its stagings, “it wasn’t a show, it was an event” and this audience member added to that tradition. We all, together, company and audience members alike, swayed and enthused to the finale “Let the Sunshine In.”

Designer Theoni Aldredge observed in Free For All: Joe Papp, the Public, and the Greatest Theater Story Ever Told (2009) that the initial crafting of Hair was total chaos. “The kids, a lot of them, were nonprofessional actors, people who looked like what they were supposed to look like, and they all arrived with flowers.” In these concert presentations, with two or three generations capturing the essence of a time and a place and “a love that steers the stars,” performers looked and acted their parts with total stunning power. The Age of Aquarius is here and living and breathing and powerful. Look around.