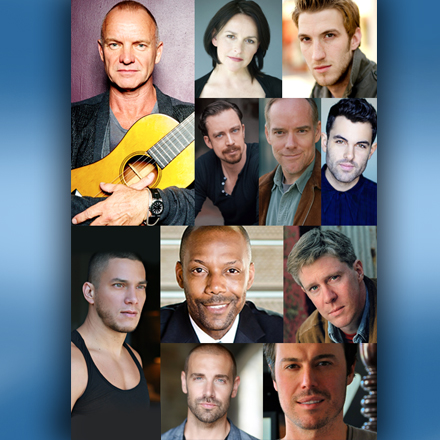 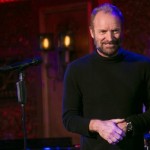 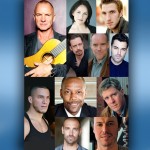 As a fledgling 54 Below producer, Reid put together a formidable tribute show, hosting with charm, humor and a collegial warmth. The latter was both the show’s success and its weak point. Populated solely with males (save for a late appearance by Sally Ann Triplett), the show was often like a frat party – lots of fun, but generally testosterone-fueled and in need of restraint.

James Taylor has inhabited the pop world as an essentially folk-blues artist. Even in his contemporary outings with Taylor Swift and the country-rock Dixie Chicks, Taylor is always the country boy at heart, with his soft, sweet baritone and gentle delivery. Music Director Mark Hartman’s attempts to “rockify” the songs at all costs, plus some over the top Broadway belting and vocal gymnastics of several of the cast, failed to serve the essence of James Taylor’s greatness.

Ryan Andes singing “Your Smiling Face”, and Nicholas Rodrigues with “Something in the Way She Moves” and “Secret O’ Life,” delivered versions of Taylor on steroids. Charlie Pollock singing “Mexico” and the blues-infused “Steamroller” fared little better, especially with the latter tune, ironically hoisted on its own petard. John Arthur Greene performed a self-indulgent “Sweet Baby James” to his own guitar accompaniment. Zak Resnick, with the Holland-Dozier-Holland cover “How Sweet It Is,” and Karl Kenzler with “Mean Old Man” gave under-achieving renditions.

Order was restored when Reid took the stage to sing “Only One.” Reid knows how to inhabit a song – it’s one of his many, outstanding talents – and he got inside the tune beautifully. A smart directorial move on Reid’s part was to have the band weigh in on the vocal end. With the exception of drummer Warren Odze, who could write a book on the art of subtly, each of the other musicians took their turn, accompanied only by their own instruments: Mark Hartman on piano adequately sang “Carolina In My Mind.” A truly fine understanding of Taylor’s musical ethic was ably demonstrated by guitarist Sean Harkness with “On the Fourth of July,” and bass guitarist John Miller singing the J. Jones/O.Blackwell cover “Handy Man.”

Michael Winther with “Don’t Let Me Be Lonely Tonight” and “Up on the Roof” (G. Goffin, Carole King), demonstrated a sensitivity to Taylor’s work. Zack Dobbins, a remarkable singer of great passion, infused Taylor’s breakout hit “Fire and Rain” with soul, despite Hartman’s curiously hopped up and up-tempo arrangement of Taylor’s lament.

The penultimate tune of the evening was sung by the much-awaited and promised appearance of Sting, who performed a lovely duet of “Shower The People” with Sally Ann Triplett (who had casually asked Reid if she could bring a friend to sing with her). There’s a good reason Sting is an international mega-star; the man knows his way around a good tune – storyteller to storyteller. Triplett’s able voice blended beautifully with Sting’s, a man surprisingly unassuming. As a gesture of thanks to Sting’s performing generosity, Reid presented him with a check for his charity, The Rain Forest Foundation. “Google it” Reid instructed the audience, while Sting beamed graciously, departing the room.

The finale number, Taylor’s cover of Carole King’s “You’ve Got a Friend” was led by Dobbins and Rodriguez. Most of the audience probably wasn’t born when James Taylor started his career in 1970, but they had a good time, if a misleading one. It’s up to Music Directors such as Hartman to perpetuate brilliance by at least trying to understand its roots and not stray from the point. T. Oliver Reid is embarking on producing, and continuing to advance his directing career; he’s savvy and talented and, therefore, will no doubt grow in the understanding of what truly serves the shows he produces. This reviewer, for one, can’t wait to see what comes next from him.