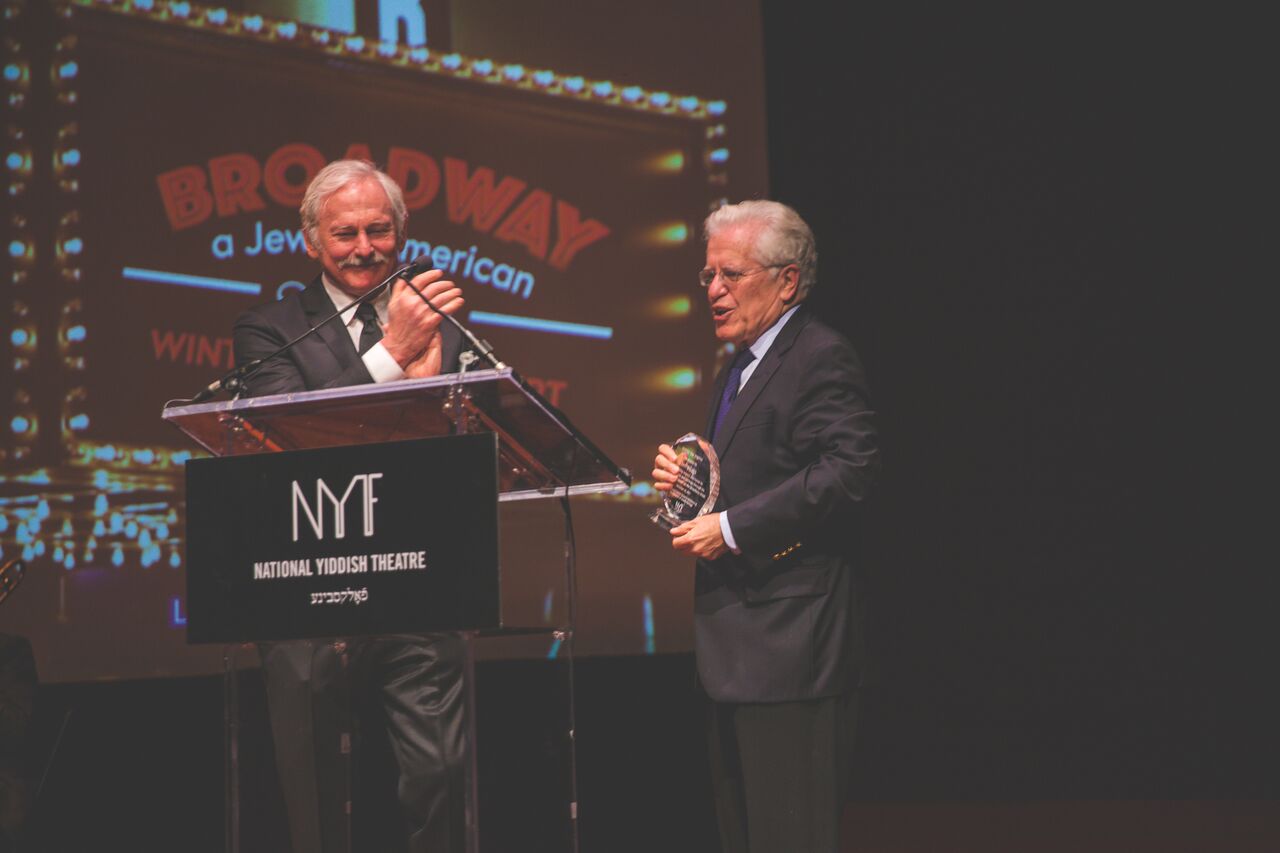 On December 18, 2017, the National Yiddish Theatre Folksbiene held its Winter Gala Concert at the Museum of Jewish Heritage, and you have not lived until you have heard many of Broadway’s classic songs like “Makin’ Whopee” and others sung in Yiddish!

The first Jewish Cultural Legacy Award was presented to prominent humanitarian Bruce E. Slovin, Founder of the Center for Jewish History, Chairman Emeritus of Yivo Institute for Jewish Research, and former Director of Circle in the Square Theatre. His emotional and sincere acceptance speech was very moving. This is the 103rd Season of the NYTF that began in 1915 and whose mission is to “celebrate the Yiddish experience through the performing arts by transmitting our rich cultural legacy in exciting new ways that bridge social and cultural divides.”  This was a night of showstoppers too numerous to mention. The set featured a Broadway marquee with photos of past Jewish life, and Jewish composers such as Berlin, Gershwin, Herman, Loesser, Rodgers, Hart, Hammerstein and others. A screen with lyrics translated into English appeared on the marquee when needed. In a night of performing highlights, some of the most memorable was 93- year old legendary lyrics Sheldon Harnick singing a tender “Do I Love You?” from Fiddler on the Roof with Judy Blazer, 9-year old Sophie Knapp, already a Broadway belter, singing the song that is a lesson for all generations, “You’ve Got To Be Taught” from South Pacific, Ron Rifkin sang a fabulous rendition of “Alexander’s Ragtime Band” in Yiddish and English, the amazing Elmore James singing “Old Man River” from Showboat in Yiddish, and Terrance Mann & Doug Sills thrilling “Man of La Mancha.” duet. Film tributes were taped from Harvey Fierstein, Whoopi Goldberg, Chris Durang and Victor Garber presented the Award to Jerry Zaks who made a gracious acceptance speech. It was easy to see why this talented man is so beloved by all who work with him. After the show, we were treated to a lovely dessert reception as the 7th Hanukkah Candle was lit and prayers said. Program notes said that, “the Folksbiene has always been and continues to be the “People’s Stage” and we are honored to count each of you as part of our “mishpokhe.” This incredibly inspiring evening felt as if it was a “family” gathering and with this kind of support, it is certain that this important organization will continue to thrive.

For more info on upcoming productions and events: Visit www.Folksbiene.org