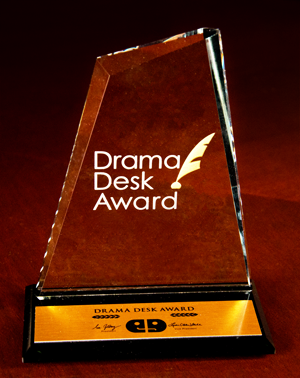 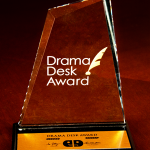 The 59th Annual Drama Desk Awards (www.DramaDeskAwards.com) will take place on Sunday, June 1, 2014 at 8:00 PM at The Town Hall (123 W. 43rd Street), it was announced today by Gretchen Shugart, CEO of TheaterMania.com and Isa Goldberg, Drama Desk President. TheaterMania will present the awards ceremony and Shugart is the Managing Executive Producer of the Drama Desk Awards. Joey Parnes Productions will produce and manage the show.

The Nominations Announcement News Conference will take place on Friday, April 25, 2014 at 11 AM at 54 Below and will be live-streamed on www.TheaterMania.com

The Awards show will be written by Bill Rosenfield and directed by Jack Cummings III (co-founder and artistic director of Transport Group).

The Drama Desk Awards, which are presented annually, honor outstanding achievement by professional theater artists on Broadway, Off-Broadway and Off-Off Broadway. What sets Drama Desk Awards apart is that they are voted on and bestowed by theater critics, journalists, editors and publishers covering theater, without any vested interest in the results. For this reason, Drama Desk Awards reflect both enthusiasm for all aspects of New York’s professional theater and a level of erudition and theatrical experience unparalleled in our industry’s other prize-giving organizations.

“We are honored that TheaterMania will again present the Drama Desk Awards at New York’s famed Town Hall,” Ms. Shugart said. “Live theater is the heartbeat of New York City and it is exciting that audience members and webcast viewers around the globe can experience this awards show which celebrates excellence across Broadway, Off and Off-Off Broadway.”

Isa Goldberg, president of the Drama Desk, added, “In the expanding landscape of New York theater, Drama Desk members continue to illuminate the vitality and diversity of productions throughout our city. The Drama Desk proudly acknowledges this season’s nominators, each of whom brings an extraordinary breadth of knowledge and experience to our awards.”

Robert R. Blume and David S. Stone, in association with Renee McCurry, are Executive Producers of the Drama Desk Awards.