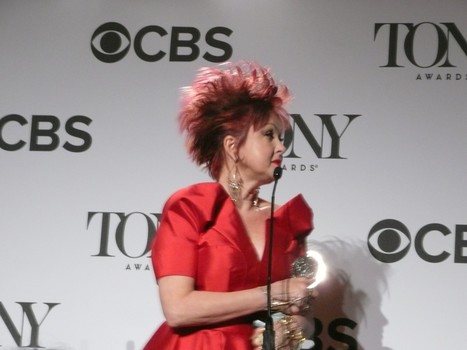 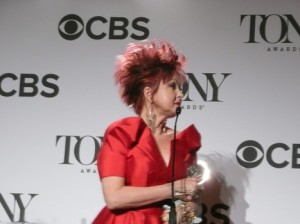 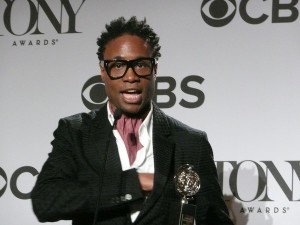 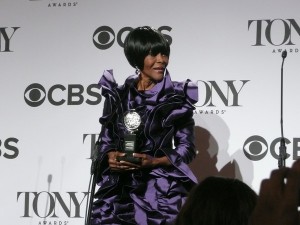 Standing on the Red Carpet for 2 hours to catch nominees and presenters is a daunting task in itself (even in comfortable shoes). The flow at Radio City Music Hall was unstoppable as producers, performers and guests made their way thru (some stopping for photos and interviews), into the grand Hall anticipating the excitement, hoping to hear their names called to receive that coveted Tony Award. Sitting in the media room, while the show went on live and trying to catch the simulcast while waiting for the winners to come and be interviewed, proved to be a little more relaxing. 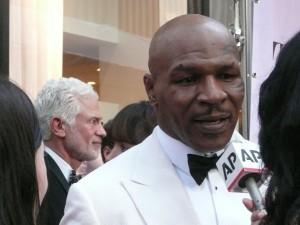 Host Neil Patrick Harris was at his best, once again, this his 4th year on the job, always ripe and ready with a quip. The opening “Tonite is bigger . . .” surely was, as he literally jumped thru hoops (a Pippin stunt) to include Mike Tyson. Lots of clever words, words, words in this compilation opening of every Broadway show, happy to see the Tonys return to Radio City Music Hall.

Neck in neck, Kinky Boots pulled ahead clinching Best Musical, (presented by Bernadette Peters) beating out its competitor Matilda the Musical, while Billy Porter (who said he was washing dishes in his kitchen watching the Tonys the year Dreamgirls was up for a Tony, deciding then that this is what he wanted to do) grabbed Best Actor, with Best Choreography going to Jerry Mitchell, Best Orchestrations to Stephen Oremus, Best Sound Design to John Shivers, and Best Music & Lyrics to Cyndi Lauper in her Broadway debut and as first female to win. She was visibly touched with many emotions. Be sure to watch her on the video below! 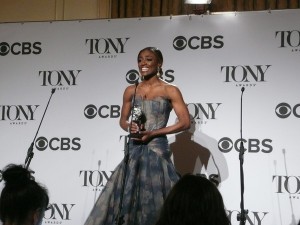 Matilda did take the Tony for Best Book of a Musical, going to Dennis Kelly, and Gabriel Ebert won for Best Performance by an Actor in a Featured Role, while Rob Howell took Best Scenic Design of a Musical and Hugh Vanstone got Best Lighting Design. This last category was a big upset for Kenneth Posner who was nominated in that category for Kinky Boots, Pippin and Cinderella!

As for Musical Revivals, no surprises here as Pippin was front and center for Best Musical Revival with Patina Miller (wearing a gorgeous Zac Posen gown) winning Best Actress (in the same role in which Ben Vereen won back in ‘73) saying she was “a little Southern girl from South Carolina. . .;” while Diane Paulus received a Tony as Best Director. Surely no surprise that Andrea Martin won Best Actress in a Featured Role as well.

In the Best Play category, it was a shoe-in for Vanya & Sonia & Masha & Spike (writer Christopher Durang accepting). Many were surprised thinking that Tom Hanks or David Hyde Pierce would grab a Best Actor Tony to find that Tracy Letts won for the revival of Who’s Afraid of Virginia Woolf?, that play also taking Best Revival of a Play with Pam MacKinnon, walking away with a Tony for Best Director and happy to see so many women directors in the theater.

It was inevitable that Best Actress in a Revival of a Play would go to Cicely Tyson, who had been waiting 30 years to return to the stage wishing for “just one more great role” and thanking everyone for welcoming her home so she could go home with a Tony. (see her on the video here)

Audra McDonald and Zachary Quinto had the honor of presenting Courtney B. Vance (Lucky Guy) as Best Featured Actor in a Play. He’s married to Angela Bassett.

Judith Light received her second Tony for Best Featured Actress in a Play for The Assembled Parties, having won last year for Other Desert Cities, which was presented to her by Tom Hanks.

Neil Patrick Harris, wondering what it might sound like if musicals and plays were mashed together, had some ideas: “The Elephant Man of La Mancha;” “42nd Street named Desire;” “Children of a Lesser Godspell;” “The Testament of Mary Poppins” . . . you get the picture.

Joining Neil for an ode to TV Series were Book of Mormon star Andrew Rannells (The New Normal), Megan Hilty (Smash) and Laura Benanti (Go On), all losing their TV series, in a cleverly fun-filled musical lament. (written by John LaChiusa)

Production numbers from the Broadway musicals presented included “Matilda,” Motown the Musical,” “Bring It on the Musical,” “Annie,” “Pippin,” “Kinky Boots, ” “A Christmas Story,” a recap of “Once,” and a special celebration tribute presented by Hal Prince (21 time Tony Winner) going to “Phantom of the Opera” in its 25th Year on Broadway, performing the title number.

Matthew Morrison introduced a musical tribute by Cyndi Lauper in memory of those theatre greats who passed on in 2012-2013, as she sang and played True Colors. The list was much too long and sad.

Sigourney Weaver congratulated Mayor Michael Bloomberg as recipient of a special Excellence in Theatre Award, Hizzoner was perplexed as he said he knows he’s a triple threat – can’t sing, dance or act.

Special Lifetime Achievement in the Theatre went to Bernard Gersten, Paul Libin and Ming Cho Lee. The Regional Theatre Award was presented to Huntington Theatre Company of Boston, Ma. and the Isabelle Stevenson Award was given to activist/writer Larry Kramer whose play “The Normal Heart,” started shooting yesterday in NY as a movie.

It was a grand night for Award giving! 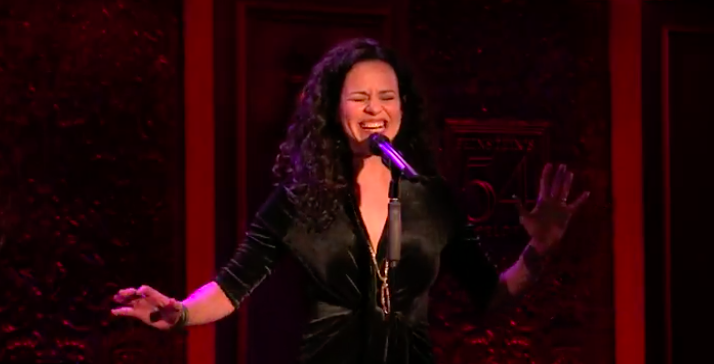 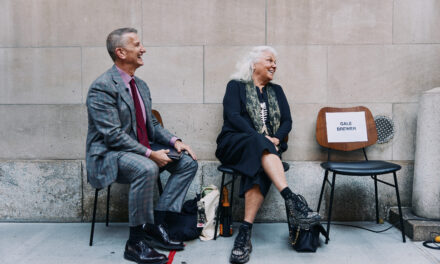 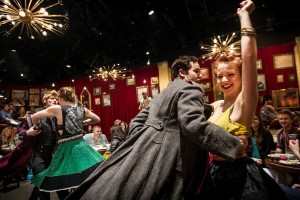 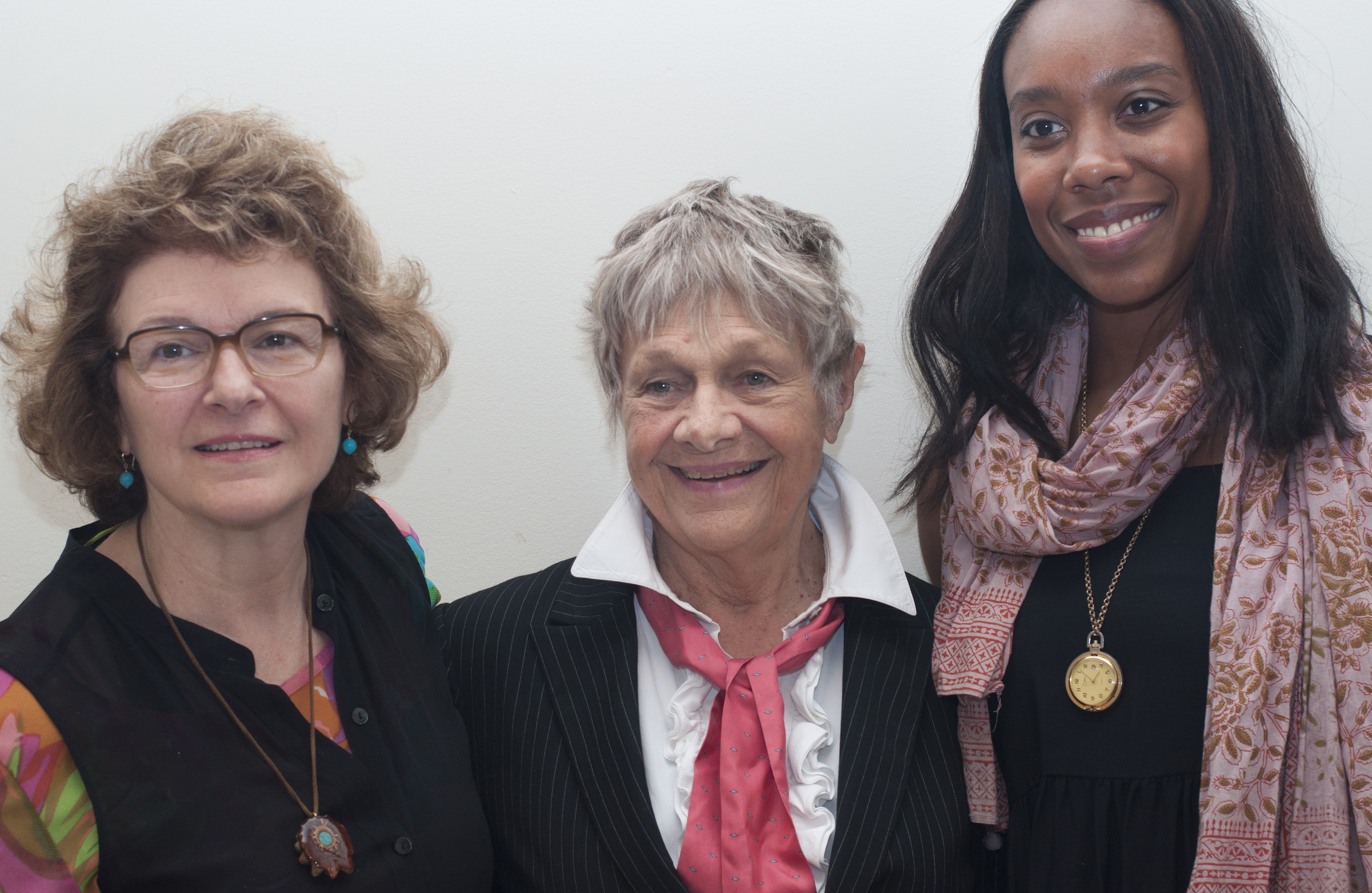