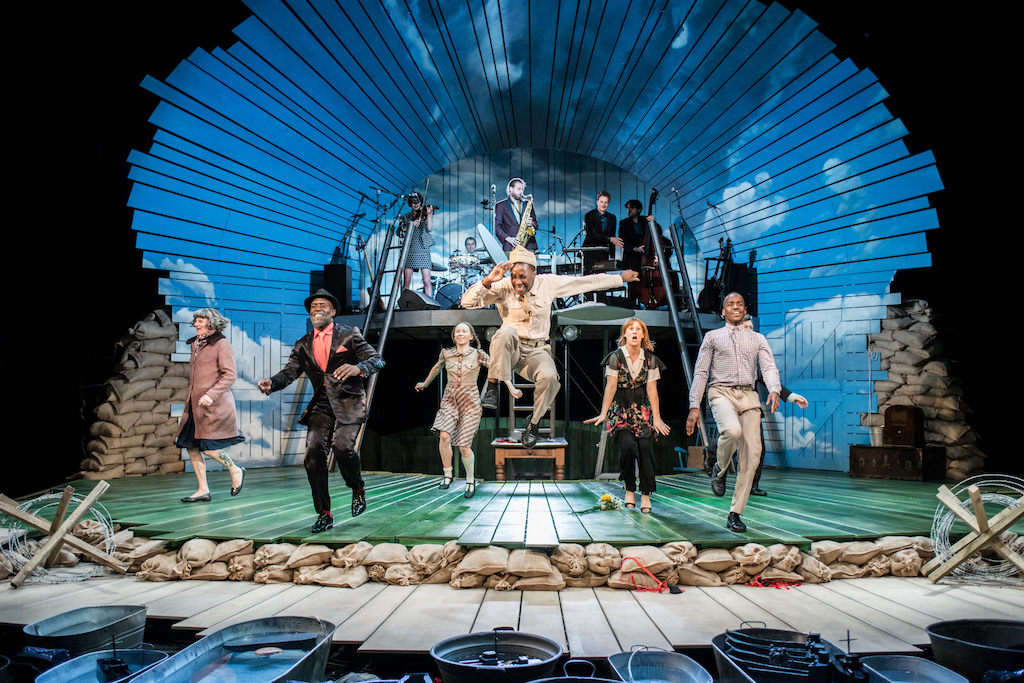 “In the dark times, will there be singing? Yes, and there will also be singing about the dark times.”  So wrote playwright Bertolt Brecht, whose epic tales of traumatic historical events were set to music.

And now Emma Rice, founder of the wonderful Kneehigh Theatre Company, has followed suit, with 946: The Amazing Story of Adolphus Tips, the magical show that she and Michael Morpurgo (of War Horse fame) have adapted from his children’s book of the same name. It’s an enchanting show about a tragic event – if such a paradox is possible. Set in World War II, 946 American soldiers were killed during a bungled pre-Normandy-invasion military exercise on England’s Southern coast. The American and British governments tried to keep it quiet, but thanks to Murpurgo’s 2005 book and its timely dramatic adaptation today, these secrets are being revealed under bright theatre lights. The charm (if such a word can be used here) of the story is that it is told through the eyes of a 12-year-old girl named Lily Tregenza, who lived in the seaside English village of Slapton where the event took place. The Tregenzas’ idyllic life on their family farm is untouched by the war, until they are told that they and 3,000 other villagers must immediately evacuate to make way for the Allies’ military exercises.

But there’s a crisis. Lily has lost her beloved cat Tips, and that becomes her single-minded focus. She enlists two African-American soldiers – Harry & Adi (Adolphus) – who venture into the danger zone to fulfill their promise of finding Tips. Their determination and ultimate heroism constitute the tragedy and triumph of the story.

Known for her imaginative story-telling skills, director Emma Rice combines a Brechtian episodic structure with narrative, music, dance, and a cabaret-style concept – to create an entertaining and deeply moving theatrical experience. Her stagecraft is nothing short of magical. Lez Brotherston’s colorful set features a jazz band perched on an overhead balcony, upon which a four-member band plays familiar and original jazz tunes throughout the story. Attached to the balcony, there’s a giant propeller that becomes an aircraft, and on the stage floor, there’s a huge red tractor. Sandbags buttress the sidewalls, and the stage floor extends down to the audience, where the action plays out. Rice, whose Kneehigh company is dedicated to story-telling for a family audience, directs a marvelous, multi-talented 12-member ensemble who dance, sing, play multiple roles, and manipulate scores of puppets – including Tips, farmyard chickens, dogs, sheep, and birds. Downstage, at the audience’s feet, there are 24 metal tubs of water where the military skirmishes take place; actors hold toy soldiers and plastic boats, which they float in the water and set on fire. It’s spellbinding story-telling, and the dozens of schoolchildren in the first row were as captivated as the rest of us older folks in the theatre bleachers at the matinee I attended.

Lily (Katy Owen) and Adi (Ncuti Gatwa) are superb dancers – as is Harry (Nandi Bhebhe) who doubles as Tip’s masterful puppeteer. Blues Man (Akopre Uzoh) is the charismatic lead singer as well as Emcee, narrating the story to its moving conclusion. The remainder of the ensemble is universally excellent.

Ultimately, credit goes to the vision of the amazing Emma Rice. “Education is the noblest function that we have found for the theatre,” says Brecht. It’s a miracle to deliver an entertaining, enlightening show about a historical tragedy – and Rice pulls it off. At the exuberant curtain call, I kept thinking we were feeling a lot happier than we should have felt, given the story. But historical insight through the eyes of a child (now grown old, looking back on it all) is a testimony of the triumph of the human spirit – giving us hope that we may one day learn the lessons that Brecht and Rice are teaching, after all.