A Scythe of Time- Gothic 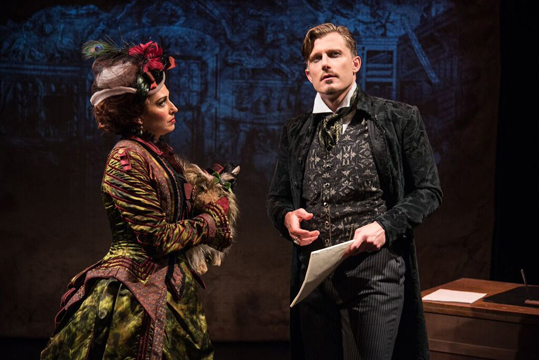 Tonight’s show is the concert version of a play that premiered at this year’s New York Musical Theater Festival. Photos from that production show on screens as vocalists perform. Images here reflect the original presentation.

The Scythe of Time is traditionally a pairing of two stories by Edgar Allan Poe- A Predicament, about a woman who inadvertently (literally) loses her head and How to Write a Blackwood Article which features the same character in publishing competition with the editor of Blackwood’s Magazine, a historically real compendium of horror stores. This musical seamlessly unites both into a single, darkly satirical tale. Blackwood’s Magazine has wiped out every other London publication but Zenobia’s small effort by commissioning writers to commit suicide and write about the experience. Each paid 50 guineas, unsung authors flock to create a one-step literary reputation, hoping to secure a place in posterity. The public can’t get enough of these uber-personal, sensa- tionalist missives. (Uncomfortably not so difficult to imagine) We hear aspirants sing about how alive they feel just before death. “It’s not what you think…I feel changed/And there’s no more pain/Then it leaves you…” Since there are ghosts onstage, it’s impossible to know whether the popular pieces are written as people die (somewhat problematic if one is drowning) or from the afterlife. Zenobia (Lesli Margherita) who once rejected Blackwood (PJ Griffith) uses her devoted servant Pompei, (Danny Rutigliano) as a sounding board. (He’s secretly in love with his imperious mistress.) Determined to stay in business, the heroine confronts Blackwood about his methodology and decides the only way she can challenge him is to accept a commission i.e. kill herself. He sings to her in Spanish because she has a Spanish name and in German-?! She understands neither. (The point?) Intending to pull out at the last minute, Zenobia looks for inspiration. Death by water and noose have been overplayed. During her visit to a clock tower, hypnotized by a view of London, a fatal accident occurs. The article is written and published to great acclaim. Blackwood’s only recourse is to top his former rival by taking up the gauntlet. He, of course, also plans to avoid death at the last minute. With a little help from Pompei, things go awry. Zenobia and her fellow conspirator have the last grotesque laugh.

Mark Alan Swanson’s Music and Lyrics (repetitive, unrhyming ) are heavily influenced by Sweeney Todd, Phantom of The Opera, and operetta. Songs are, however, not sufficiently melodic to be very distinguishable from one another. Having written this, Swanson has a real feel for the era, a talent for evoking the macabre, and tremendous skill with vocal arrange- ments. As we hear next to no dialogue, it’s impossible to get an impression of Alan Harris’s Book.

On stage talent is first rate. Lesli Margarita (Zenobia) has both presence and power vocal reminding me of a young Patti Lupone. Though her initial number errs on the side of ham, she finds her water level and leaves a fine impression. PJ Griffith (Blackwood) has an excellent voice, a villainous laugh and an aptly riveting, cocksure gaze. Responding to a table of audience giggles, however, he muggs through the last part of the play undercutting his fellow thespians. As Zenobia’s servant, Pompei, Danny Rutigliano is simply wonderful. Accent is perfect, characterization on target, vocal evocative.

A Scythe of Time– in Concert