A Tomato Can’t Grow in the Bronx 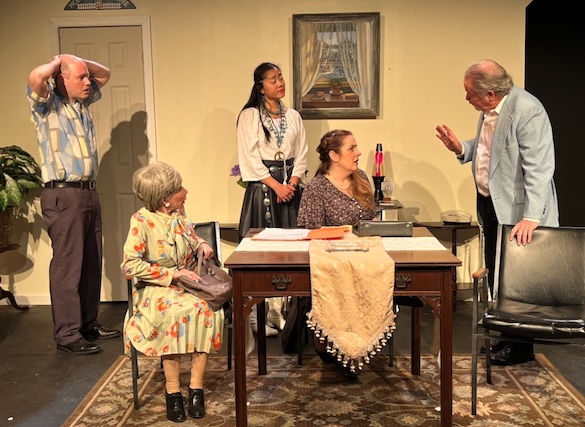 In the late 1960s, the Bronx was burning—literally. A once thriving New York City borough was in serious decline—against the chaos of wider political and social turmoil in the nation: the Vietnam War, civil and women’s rights and the assassinations of Martin Luther King and Bobby Kennedy. It’s into this milieu that playwright Gary Morgenstein has set his two-act play, A Tomato Can’t Grow in the Bronx, specifically set in 1968. The multi-generational family it portrays is Jewish, dealing with what were the real issues of the day in that place and time. In this era of cancel culture, that’s an important fact to take on board. There are plenty of references to race relations in the play, often in “non-PC language.” So, by no means should the struggles of the Simms-Abrams clan be construed through the lens of modern-day values.

Morgenstein pushes you into that challenge right away. As the play opens, 15-year old Elliot Abrams (Spencer Neumann) has been mugged and it’s clear the perpetrator is a Black boy. This event’s aftermath and consequences thread through the plot as it advances. The incident spurs the crux that drives the engine of A Tomato—the desire of his parents, Eleanor and Sammy (Holly O’Brien and Mike Roche, respectively) to flee and join the exodus of whites moving to the suburbs. After all, even though they’ve tried, the Abrams realize it’s impossible to grow tomatoes on a Bronx fire escape. In the suburbs, they can have a real garden and achieve the American Dream.

Diving deeper into the relationships within the family, dysfunction is peeled away layer by layer, exposing patriarch Harry Simms as the linchpin holding a very flawed center together. He rules not with an iron fist, but with a large bankroll. Jackie Kusher’s Harry is a bellicose martinet. His is a strong character and he gives it all he’s got, with an ability to pull back and add nuance when the narrative calls for it. As his long-suffering wife, Gladys, Andrea Bell Wolff shows a fine appreciation for the stultifying role that women were impelled to play in that era. She’s also funny; there’s not much comic relief in this play, and what little there is, is mined with hilarity by Wolff. Her role, though, is the least developed of the crew, and that’s a shame. There’s so much more that the saucy Wolff could contribute with a more fleshed out Gladys. She’s a real asset to the production. (Wolff also won a “Best Actress” Award for her role as Gladys in a prior production of the play.)

Harry’s machinations revolve around a smothering possessiveness he has for daughter Ellie. It’s so intense that it sometimes borders on the incestuous, which, by other indications in the text, it is not, at least not overtly. But there are icky-making moments in A Tomato… nonetheless. It turns out that the Simms and Abrams live next door to each other in a Bronx apartment building, and Harry is determined to keep it that way. A short Act One is set in awkward and somewhat confusing side-by-side kitchens. The scene shifts to a model home in Long Island for Act Two, which introduces realtor Madeline Kramer. Marina Chan plays her like a Valley Girl. Kramer is young, and this, we find out, is her first deal, but a flirtation with Elliott is also queasily inappropriate—the character isn’t that young. Madeline also has no significant function in the play, largely standing by as the entire fabric of the Abrams-Simms relationship unravels. Then, as the drama begins to reach its conclusion, all is quickly resolved just like that, by an unseen fairy waving a magic wand.

There’s plenty of meat on this theatrical bone and it’s tasty.  A Tomato Can’t Grow in the Bronx is well written and the dialog is solid. There’s much to recommend it. Many will find it identifiable and ultimately heartwarming. In addition to Wolff’s award, the property won two other 2022 Perry Awards, including “Best Play.”

What needs fine-tuning is its construction. Equalizing the two acts and rethinking rapid-fire scene changes would provide a heftier, more meaningful play-out of the drama. And in Elliot, there’s a certain charm in his teenage  aspirations of becoming a famous sportscaster. From time to time, he produces a flashlight, using it as a pretend mic for play-by-play commentary on the action. While cute and charming, this gambit isn’t well-integrated into the flow of the play and can be head-scratching in its randomness.

Presently, the structure of A Tomato Can’t Grow in the Bronx made scene changes awkward and overly long. More astute direction by Bernice Garfield-Szita could have helped. Additionally, some directorial choices were mystifying, especially with Elliott’s flights of sportscasting fancy and in confrontations in which characters didn’t engage with one another but delivered their lines gazing out into the audience.

Set design and costume design were both by Garfield-Szita.  Lighting and sound was designed by Rocky Noel.

A Tomato Can’t Grow in the Bronx has a runtime two hours with one intermission. It plays at Chain Theater (312 W. 36th Street, 4th) through Saturday, December 17.  Tickets are $25. For tickets go to  ChainTheater.org