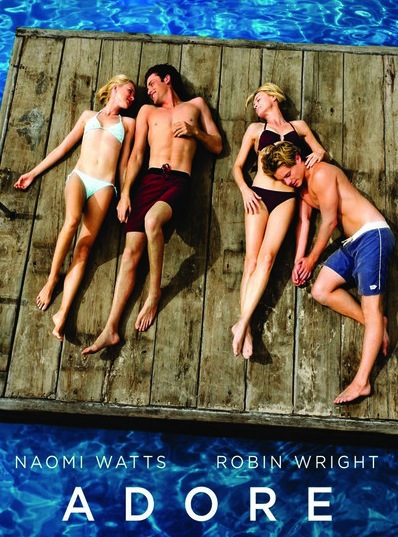 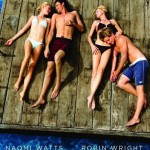 That Christopher Hampton is credited as having written the “Screenplay and Dialogue” in the opening credits of Anne Fontaine’s Adore, seems like a call to blame him for the failure of the movie. The concept of two affluent lifelong

friends who take up with each others’ sons is ludicrous enough, but the lines that Robin Wright and particularly Naomi Watts have to utter are consistently begging us to cackle. I wasn’t sure it was possible for a movie to ring so entertainingly false.

Naomi Watts plays Lil, the less confident of the two. She may or may not be grieving her husband’s death and it’s not entirely clear what she does for a living. The only insight we get into her life is that she’s always “petrified.”

Scenes in the movie often last too long — one of the best examples being one where she stares at every wrinkle in the mirror as it seems her young lover might not adore only her. She’s petrified of aging and losing her youthful lover, and that might have come across better had Watts not played it so comically at the surface level. One of her funniest overacting moments is when she yells, “I think they’re trying to kill each other!”

Robin Wright’s Roz is an even blanker slate. Again, we don’t know why she has a beautiful beach house and we don’t get much of a reason for her to leave her husband other than her interest in Lil’s son. Wright shows some demons in her eyes and has much more restraint than Watts. She comes out largely unscathed, though you’d think she would have better taste in paycheck roles.

Christopher Hampton isn’t big on subtext. His screenplay for A Dangerous Method spells everything out in detail, but it worked because those characters were psychologists. There is no way that these beautiful upper middle class snobs would talk as openly as they do about their feelings, leaving nothing to the imagination. Every conversation feels like a parody of how women talk to each other about love and aging. If Adore was meant to be a farce about how men think women behave, it has succeeded admirably. It’s the funniest drama I’ve seen all year.