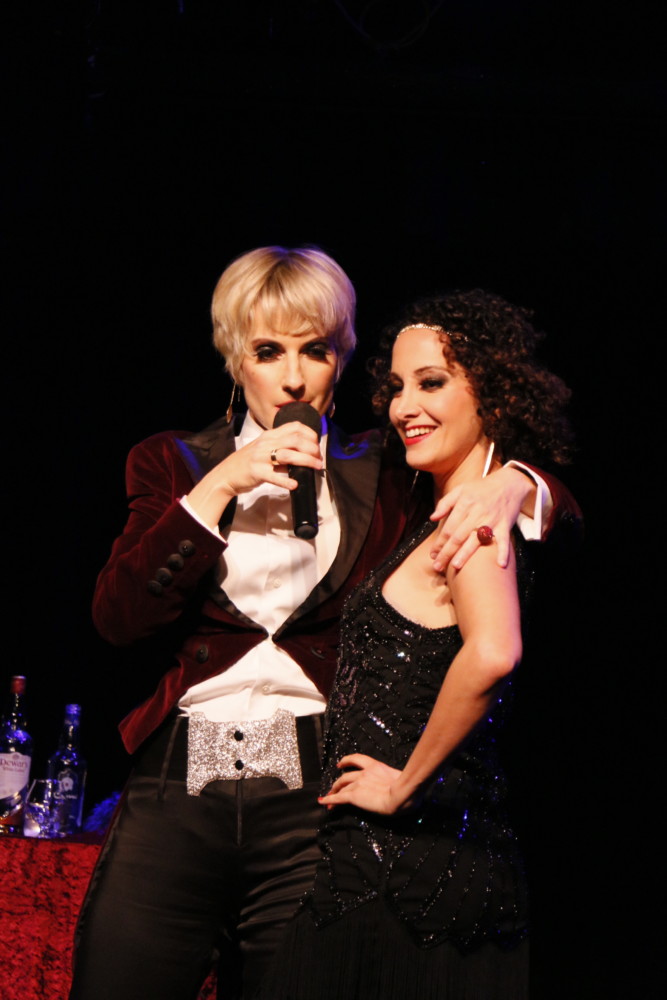 Mazel Tov Manhattan! The Award-Winning Adrienne Haan, the international star hailed as The First Lady of Cabaret and an entertainer of the highest caliber is presently ensconced at The Triad Theater as 2019’s Resident Artiste, a word that should always be spelled with the capitol A when applied to Ms. Haan. She’s an electrifying concert and cabaret luminary — singer, producer and writer who circumnavigates the planet with an unbelievably diverse repertoire that contains fascinating information as well as pertinent music about whatever period and place she happens to be immersed in.  Among her specialties are showtunes of the 1920s and 1930s, chansons to jazz to blues to klezmer to Broadway.

Where is she now? Spending the fortnight between her June and July Triad appearances touring China! It’s her debut there with her brilliant Musical Director Richard Danley presenting her latest show, Broadway Rock Hall. Danley is a genuine piano virtuoso whose lush sexy arrangements make you want to snuggle up to someone you love and commit unspeakable acts.

Haan’s recent June New York Triad performances celebrated a favorite Haan period, Weimar Berlin in the show entitled Berlin, Mon Amour. Her program highlighted Lavender songs considered doubly degenerate by the rising Nazi Regine. First, because explored sexual diversity and secondly, because most of them were composed by Jews. Berlin, Mon Amour celebrates the 100 Centennial of the Weimar Republic, which began a new political and cultural movement in Germany that was constantly threatened by failed left wing uprisings and attempted putsches by the right. It features songs Haan has not sung before plus others that are newly arranged and interpreted. Together they tell the story of the rise and fall of Germany’s first democracy. This powerful theatrical musical voyage depicts the struggles of feminism, the longing for freedom, transgender discovery, sexual liberation and the demolishing of chains of the old tradition. Could anything be more old but new. 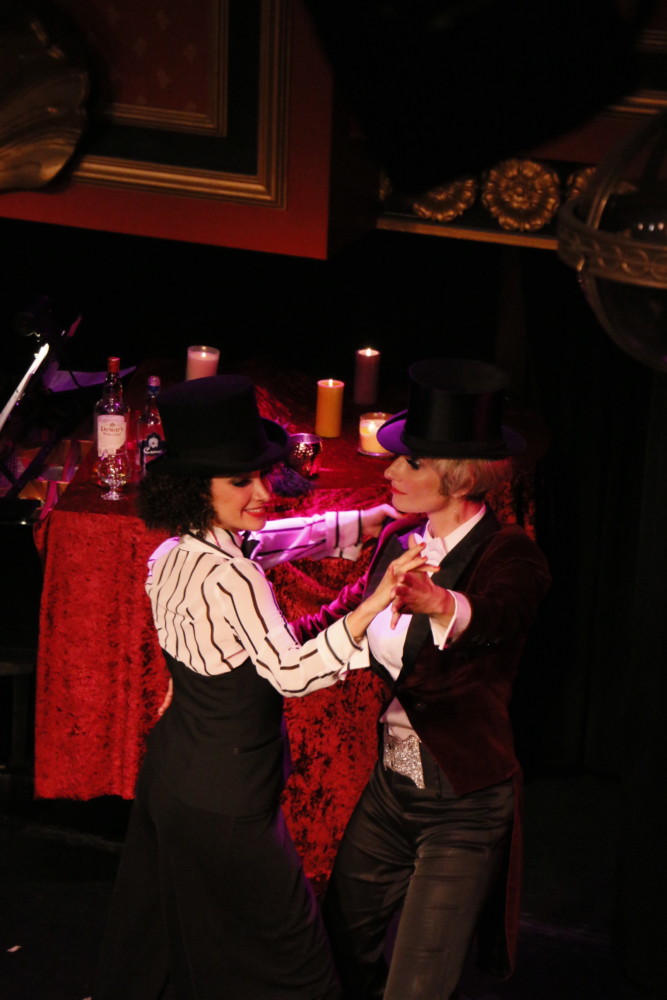 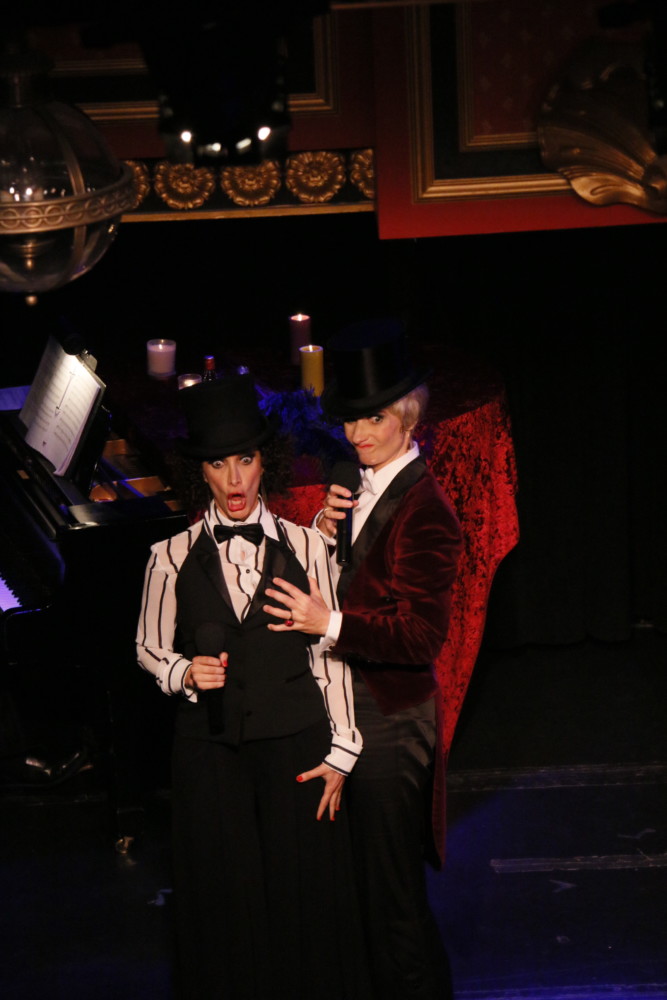 Other than Kurt Weill, the most prolific German Jewish songwriters/composers were Friedrich Hollaender and Mischa Spoliansky. Both of them managed to escape from Germany with their lives and talent intact. Hollaender was invited to Hollywood where he wrote the scores for a 100 or more films and Spoliansky ended up in London enjoying success writing musical scores for films. Hollaender, the more famous, was Marlene Dietrich’s musical muse. He wrote the songs and score for The Blue Angel which included the international favorite, “Falling in Love Again,” which Dietrich continued to sing for her entire career.  Spoliansky’s compositions like “The Lavender Song” and “Masculin/Feminin” were kinkier and more explicit, and “Masculin/Feminin” particularly, when acted out by the two very they-know-what-they-want women, becomes an amazing show-stopper. In London, Spoliansky was hired to compose “authentic Nigerian” songs for Sanders of the River. to be filmed in in Nigeria and performed by star Paul Robeson. Many years later, the film’s producer heard Spoliansky’s song sung in a remote river by Congolese fishermen as they paddled their boats upriver. Spoliansky had never been to Africa, but his work proved to be, in a sense, genuinely authentic. 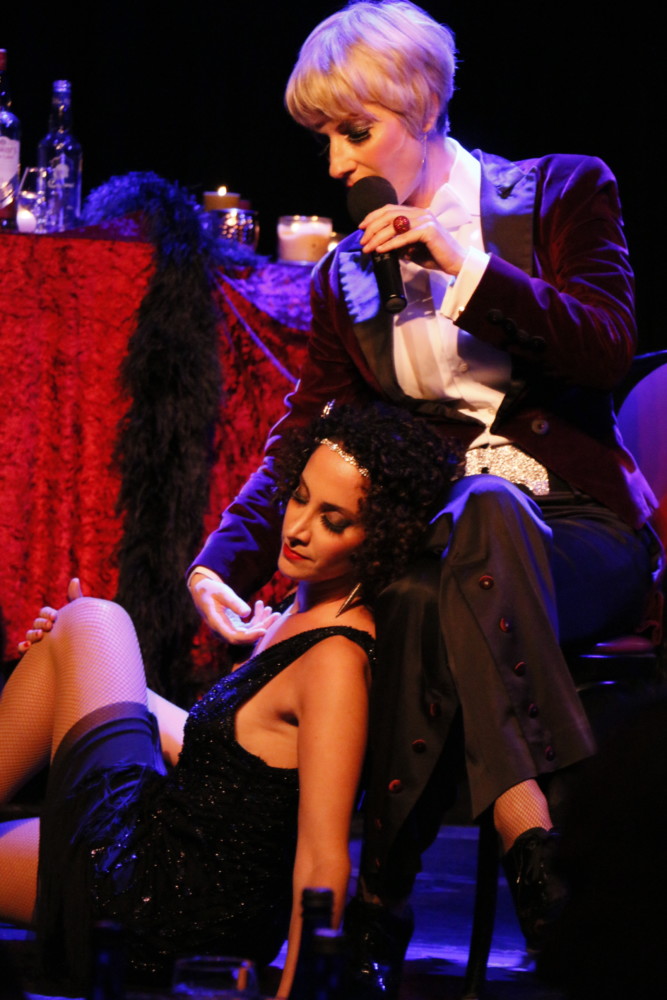 Ms. Haan is quite capable of wowing an audience on her own.  She’s a personable and personal entertainer, comfortable and commanding on stage and endearing when she interacts warmly with an audience. Ms. Dahan, a very successful French dancer and cabaret artist making her New York debut in this show, is equally sensational and endearing. She was born in Luxembourg and has been living in Paris since 2001. Choreographer, singer and dancer of the Show company Magma Show Paris, she has created and produced with her partner Maryan Rousset, 10 different shows with dancers , singers and musicians in France that play all over the world.

Haan and Dahan are both superb actresses. On stage together, their interaction doesn’t just double, it quadruples their effectiveness.

Ms. Haan opens the performance totally butch in leather boots, a top hat, velvet slacks and short tight horseback riding jacket, singing Hollaender’s “Chuck Out The Men” with lyrics that prove the more things change the more they stay the same. It’s followed by Mischa Spoliansky’s “I Am a Vamp.” So what else is new? When Ms. Dahan enters, she first appears as a Charleston Dancer. By their first duet, “Masculin/Feminin” they sing to each other that they can be either masculine or feminine with each other. Zowie!! There are songs about “Sex Appeal,” Cole Porter’s “What is This Thing Called Love” and, naturally, “Falling in Love Again.”

Berlin, Mon Amour, as brilliantly staged and directed by Barry Kleinbort, is much more than an hour plus of European songs. It’s a first-rate theatrical production. It’s so unique and honest that it stays with you forever. 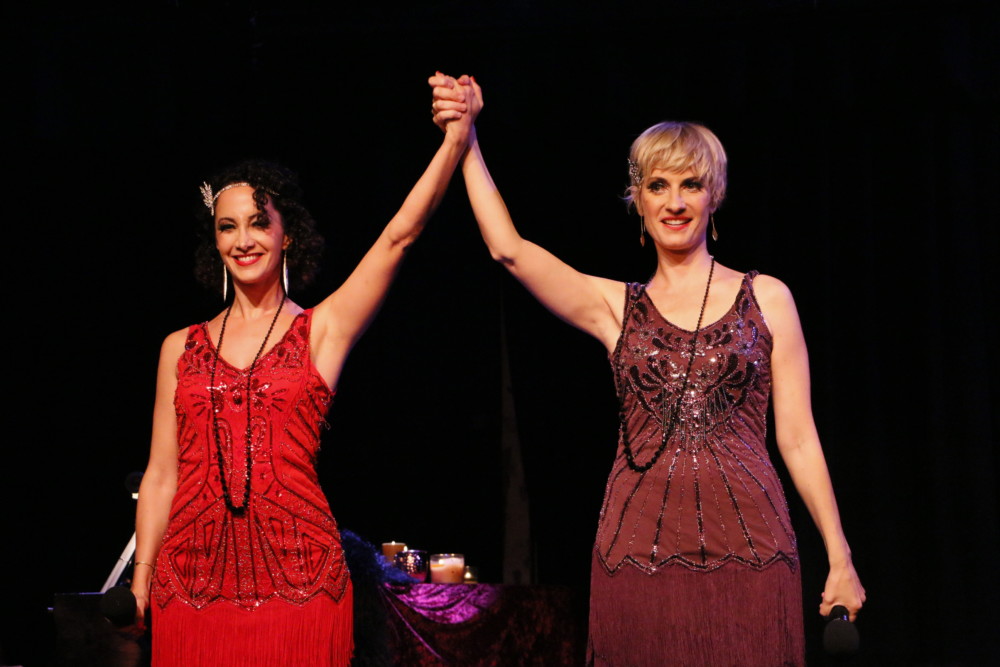 Sorry you missed this? You should be, but you’ll have an opportunity to see Ms. Haan again at The Triad when she returns from China. On June 26th she’s presenting Cabaret Francais with Richard Danley on piano and Mike Campenni on drums, a soiree that promises to be equally emotional, witty and entertaining. It will feature classics by Edith Piaf, Charles Aznavour and Jacques Brel, and introduce lesser known oeuvres such as 1920s and 1930s French chansons by Kurt Weill and Walter Jurmann and contemporary French pop-jazz songs by Patricia Kaas.

For a fascinating performance with a genuine Artiste, Adrienne Haan is not to be missed.