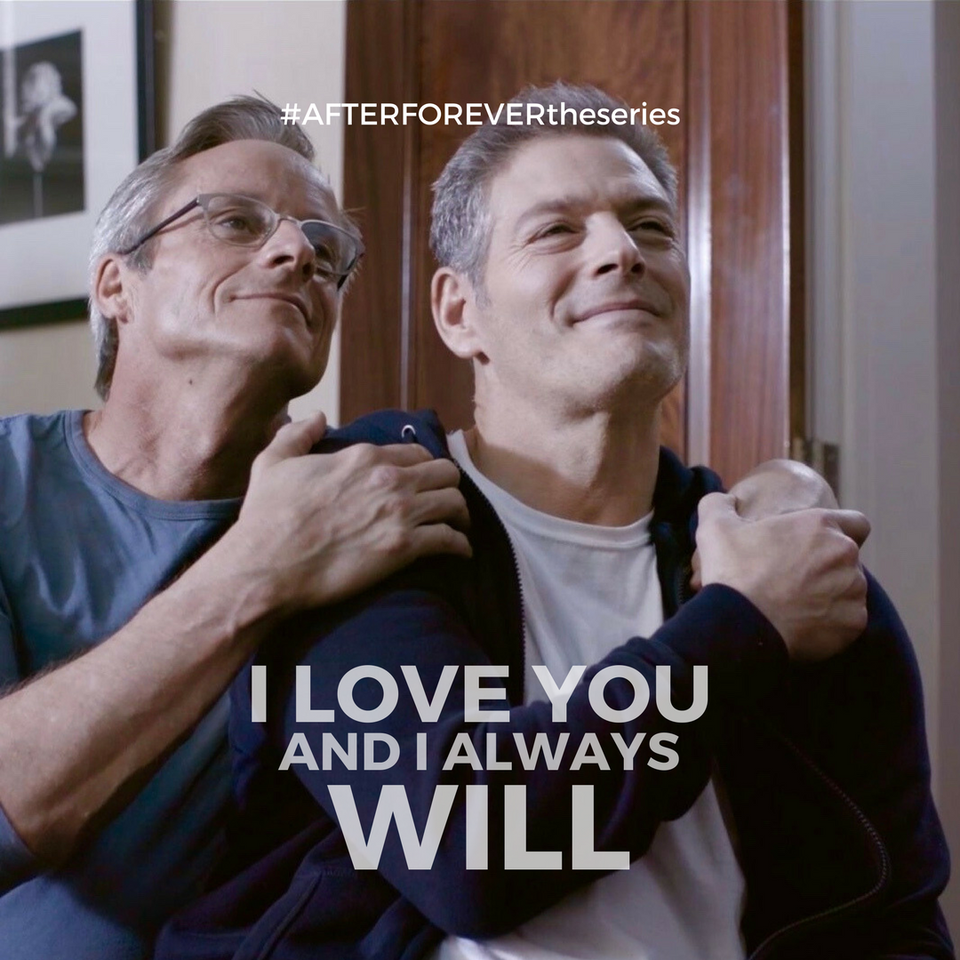 On March 19that the Scandinavian House in Murry Hill, we were introduced to a new TV series,  After Forever, about relationships, families, aging, and death. Particularly this series focuses on, with both pathos and guffaw-inducing humor, a married New York City gay couple (Brian and Jason) in their 50’s who are celebrating their 15 year relationship. It’s a refreshing change that the series addresses middle-aged gays, and what they must face, and not the usual story portraying young, muscular 20-somethings. Throughout the 8 episodes we were shown how a loving couple and their families of origin and choice deal with change and wrenching loss. Each episode is introduced by a grainy montage of the couple enjoying one of their favorited venues, Central Park, a tool that demonstrates their love for each other and the humor, exuberance and connection that they have. (“You are truly my soulmate and I love you”.) Then each episode see-saws back and forth from the present to the past, and back, providing a marvelous pastiche of their lives. We are introduced to Brian and Jason’s friends and family, which demonstrates the marvelous relationships that gay men are capable of cultivating. Heading the spot-on cast, Kevin Spirtas as Brian and Mitchell Anderson as Jason genuinely color a couple so deeply in love. The rest of the cast shine brightly, but the ladies, Cady Huffman as friend Lisa, Erin Cherry as Brenda as Brian’s assistant and Anita Gillette as Frannie, Jason’s mom, are supernovas. Cady sings her heart out with her of “My Buddy” at Don’t Tell Mama, Erin channels her version of Kevin’s black, lesbian Eve Arden-esque assistant: “We lesbians are very empathetic…” and Anita rips it as a heartfelt Mom icon. The cast is supported by some superb and funny writing. The best vignette is when family and friends are helping one of the pack to get back in the game and the dialogue goes from a lesbian saying “…you don’t want straight people setting you up,” to a gay couple saying “…you’re letting a lesbian set you up?” to another pal saying “. . .a 21 year old waiter is NOT what you need.” Good stuff.

Other than the compulsive need to insist that we cannot be happy unless we are in a relationship, the series hits it stride every episode to enthrall the audience with realistic, loving people. Bravo!

Created, written and produced by Michael Slade and Kevin Spirtas