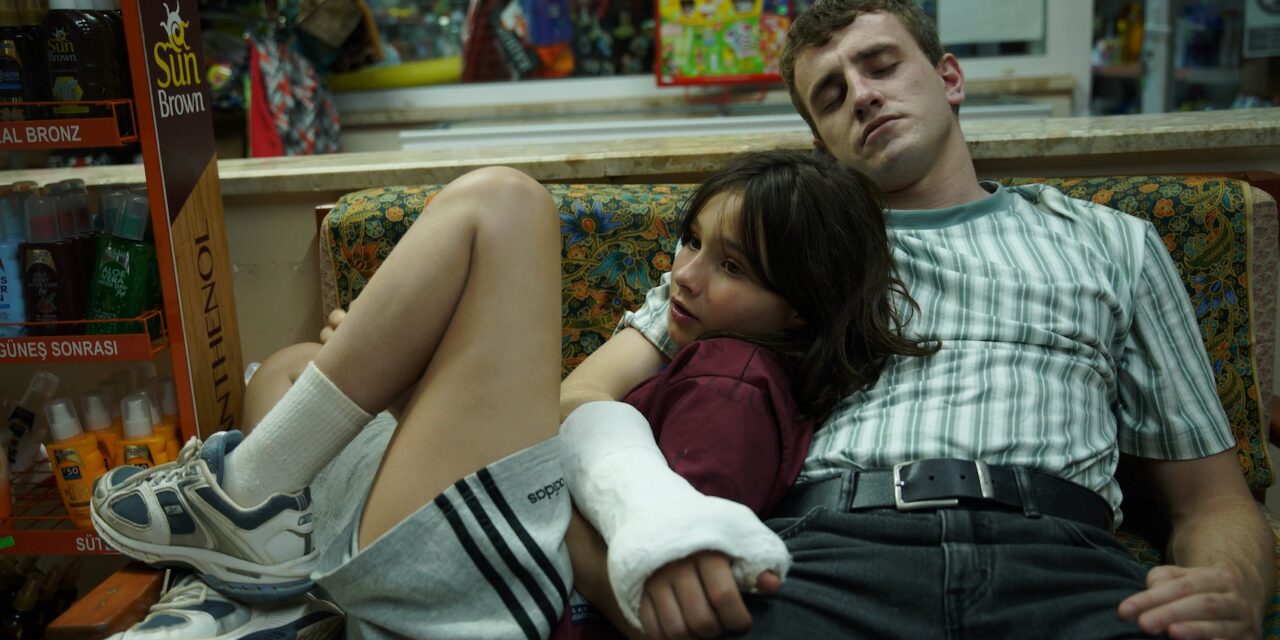 In Aftersun, writer/director Charlotte Wells infuses her debut feature with cinematic beauty and fragility. It is a tone poem of layered memory as daughter Sophie attempts to reconcile memories of her father Calum at a crucial turning point in her relationship with him. Wells conveys the tone and mood of Aftersun by employing sly jump shots into flashbacks and flashforwards to highlight what happens on a father-daughter weekend vacation to a coastal resort in Turkey that takes place twenty years earlier.

Inspired by Wells’ relationship with her dad—portrayed by Paul Mescal as Calum and herself as a tween portrayed by Frankie Corio as Sophie—Wells keeps us riveted because of her well-thought-out cinematography, well-constructed scenes, use of close-ups and reliance on strong visuals that keep the dialogue spare and revelatory. All are designed in the service of characterizing a crucial time in the father-daughter relationship which carries emotional grist. After the vacation, the break in their bonds guides Sophie’s life going forward.

Though nothing unusual happens on the surface, the actors unspool the undercurrents of feeling in the sometimes awkward silences, looks and brief revelations about the family divorce, Calum’s lack of money and other issues that drove her parents apart, which we note upsets her dad. Beautifully portrayed by Mescal and Corio, we are kept in suspense and afraid that one or the other may come to harm on this unusual trip that appears normal but isn’t because it is missing the unifying force of the presence of Sophie’s mother and Calum’s former wife.

As Sophie remembers, she takes us on the holiday which we experience with her. The trip is fraught with a few problems. There is one bed and Calum has to sleep in a chair uncomfortably because there isn’t another room with two beds. He doesn’t have money for luxuries, so the vacation is a getaway, but their joys are limited to relying on each other and the hotel’s average amenities. They appear to do well, comfortable with each other, but strains do develop.

The resort offers Sophie the opportunity to meet other kids in the pool, as suggested by Calum, which doesn’t interest her. However, she does make an acquaintance with a boy around her age in the game room.  After Sophie goes off on her own the second day, she returns to find the door locked and must sleep in the lobby. Finally, when the concierge unlocks it for her, Calum is naked on the bed sleeping off his drunk. Though he apologizes and Sophie takes it in her stride and forgives him, it is another clue why her parents divorced. Though they don’t go beyond apologies to a deeper discussion, the unspoken meaning of embarrassment, regret and melancholy is heavy in the air.

Additional clues to her dad’s feelings of sadness at the turn his life has taken, Wells includes scenes which are laden with emotion, sensitively expressed by Mescal. One is when his back is to the camera, and he cries. Though Sophie is not present, the scene may be imagined for Sophie’s reveries are her attempt to reconcile what she doesn’t understand about the divorce and her dad. Clearly, the scene indicates how her father feels about losing his family. However, it is also her projection of emotion onto him. She has lost him. Never again will he be living with her and her mother. She will only see him alone for a day or an extended weekend.

Though the vacation is meant to salve the hurt for the two of them, it actually intensifies it. The trip symbolically represents an end. The poignancy of never being together as a family stings.

As the adult Sophie (Ceila Rowlson-Hall) remembers their eating meals, relaxing at the pool, sitting on the beach, putting on suntan lotion, being locked out of the room, being on a raft out in the water to share a real moment with her father (he tells her she can always come to him for help), these long moments together are in the past. They are broken up by flash forwards of Sophie in a club. The flash forwards are momentary shots of adult Sophie that include, in random order, Sophie dancing with her female partner, thinking, staring out as an emotional moment from the past captivates her, kissing her partner fervently.

All these brief cutaway shots are in blue light, distinguishing Sophie’s remembrances in the present at a particular setting. The past is in bright, flat lighting except for the evening scenes when tween Sophie walks with a boy her age and kisses him or watches older kids, whom she admires, at a bar.

Wells’ cinematic choices contrast meaningfully. The cutaways from the present to long sequences from the past are telling. Wells implies the extent to which Sophie’s past emotionally carries the bulk of the weight of who she is in the present. The past determines the choices made and the emotions suppressed. These emerge, triggered by incidents and/or events and people encountered in the present that Sophie glides through. However, these events are governed by what happened twenty years before.

Aftersun intrigues on many levels. It is an A24 release. For tickets go to the NYFF60 website: www.filmlinc.org/nyff2022/guide/