‘Ain’t No Mo’ Erupts On Broadway 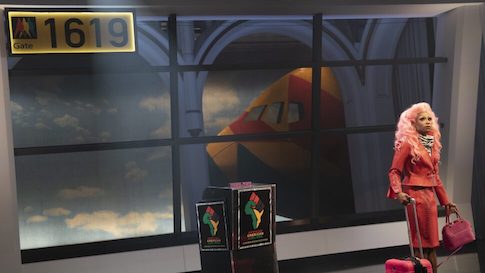 All but the lava flows in Ain’t No Mo’, an explosive volcano of a play from the mind of playwright Jordan E. Cooper, which opened last week on Broadway at the Belasco Theatre. Having seen it downtown at the Public Theater nearly four years ago in its first incarnation, I was so stunned by what transpired, I decided to wait for Cooper after the show in order to speak with him. I needed to see for myself if, as the program stated, he was really twenty-four years old. And it wasn’t easy to recognize him out of makeup, as he also portrays a flight attendant in full drag named Peaches in the play. A pleasure to speak with, I wished Cooper luck on his future endeavors. He wound up working in television fairly quickly as the co-creator of BET’s “The Ms. Pat Show,” now in its third season; and good for him, since the pandemic had shut down American theater for the duration. This makes Cooper at twenty-seven one the youngest black showrunners in television history and one of the youngest American playwrights in Broadway’s even longer, and more storied, history.

At the Belasco, you know you’re in for a ride when the pre-curtain “silence your cellphones” speech is part welcome/part threat. Cooper, voicing the as yet unseen Peaches, is in no mood to play games and practically forces the audience to shut off their phones. “This ain’t no pre-recorded speech—I’m watching you!” It worked, too—not one rang in the one hour, 40 minute running time. At the rise of the curtain, we are met with a preacher (Marchánt Davis), and a white coffin center stage. He pronounces that on this date, November 4, 2008, with the election of Barack Obama, “Brother Righttocomplain” is dead. “The “N” word is our word because the President is an “N” and there ain’t gonna be no mo’ discontentment,” he cries, surrounded by four female mourners (Fedna Jacquet, Crystal Lucas-Perry, Ebony Marshall-Oliver, Shannon Matesky), who along with Davis and playwright Cooper, compose the entire company. The savage satire stikingly sets up what’s to follow, especially when this scene ends with the preacher’s joyfulness cut short by the sounds of newscasters broadcasting the names of some of the all-too-familiar racist murders over the past fifteen years. It is the first, and not last, time laughter gets caught in our throats. However, in the hands of these fine actors, each of them a gem, and under the watchful eye of director Stevie Walker-Webb, who staged it originally, the difficult tone is handled beautifully.

This first scene, performed with the house lights all the way up, contains a call and response so invigorating, you would swear Davis preaches in his spare time. I wondered how Cooper could top this since, at the outset, he already has the audience on its feet. As it turns out, it’s only one of several brave elements of the play’s construction and execution. Unfolding over a series of eight vignettes, the mixture of side splitting comedy as well as stomach churning pain, eventually lead to its powerful conclusion. Though a tricky balance, and not one hundred percent successful, when the risks pay off, they are so powerful as to smooth over any rough patches.

With its first scene set in the past, scene two is set in some nebulous future. It introduces us to Peaches, a flight attendant at African American Airlines, dressed in wild colors with a giant plume protruding from the blonde wig on her head. Peaches is a wonderful creation, talking up a blue streak on her Bluetooth when we first meet her and who lets us in on the current situation in America, which has “offered” to send its entire Black population back to Africa. Everyone seems to be complying, and that is what informs the rest of the scenes that follow. From one which takes place in an abortion clinic, to the set of Real Baby Mamas, a parody of Real Housewives (or, if you will, a parody of a parody), to a family dinner of a well-to-do Black family who have pushed down their Blackness to such depths it’s released in the form of a being (Crystal Lucas-Perry) who terrorizes them. In the final scene, set in a prison with female inmates being released so that they can “go home,” the drama released is so fierce that I feared the aforementioned “hot lava” would overwhelm me.

Each of the scenes, which require numerous lightning-quick wig and costume changes (bravos to Mia M Neal and Emilo Sosa, respectively), are too high risk and brazenly written to ever be mistaken for Saturday Night Live sketches, thankfully. Again, enormous credit is due the entire cast, all of whom are worthy of Tony nominations, though I must single out Ebony Marshall-Oliver, who was such a revelation in last season’s Chicken and Biscuits, and Crystal Lucas-Perry, who in the final two scenes is given a chance to shine in captivating (and polar opposite) characterizations. Also, it has to be said that Jordan E. Cooper meets the moment in the play’s final scene with a fearlessness that has to be seen to be appreciated.

His is an original voice and bravo to the prolific Lee Daniels (Precious, Empire), who is both producer of Cooper’s “The Ms. Pat Show” and Ain’t No Mo’. Coming close to Christmas, Ain’t No Mo’ is a true gift for theatergoers up to the challenge of its undeniable power.