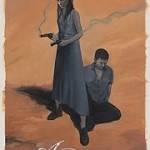 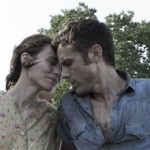 Some actors can overcome a life of privilege and give remarkable performances as people living below the poverty line. Rooney Mara is not one of them. The Westchester-bred daughter of a prominent administrator for the New York Giants, Mara has been racking up prestigious roles since giving polished performances in David Fincher’s films The Social Network and The Girl with the Dragon Tattoo.

You can constantly see, in her performances, the great amount of thought and preparation she puts into the role, and that’s a problem. I never believe once that she’s a poor mother who does manual labor in rural Texas in Ain’t Them Bodies Saints.

It’s not entirely her fault. David Lowery, making his writing and directing debut, has created a film where moments of attempted tenderness and anguish never break through the artifice. The film begins with a title card that reads “This Happened In Texas” as if to distract from the fact that it was filmed in Louisiana. You see that Lowery is strongly influenced by Terrence Malick and Robert Altman (the latter’s influence is made clearer by Keith Carradine’s presence), but unlike those masterful filmmakers, Lowery seems to have had too much control during production. The film is over-scripted with poor attempts at overlapping dialogue and eye roll-inducing epistolary narration.

The film’s plot is not worth going over, because Lowery delights in withholding plot details in an attempt to manufacture suspense. This does male lead Casey Affleck a disservice. Like Mara, you can read the preparation on his face and he never stirs the soul like he should. More interesting actors like Ben Foster and the aforementioned Keith Carradine should be magnetic, but Lowery’s characters are too underdeveloped for them to shine. The whole affair ends up being so precise and boring, where it could have been messy and fascinating.