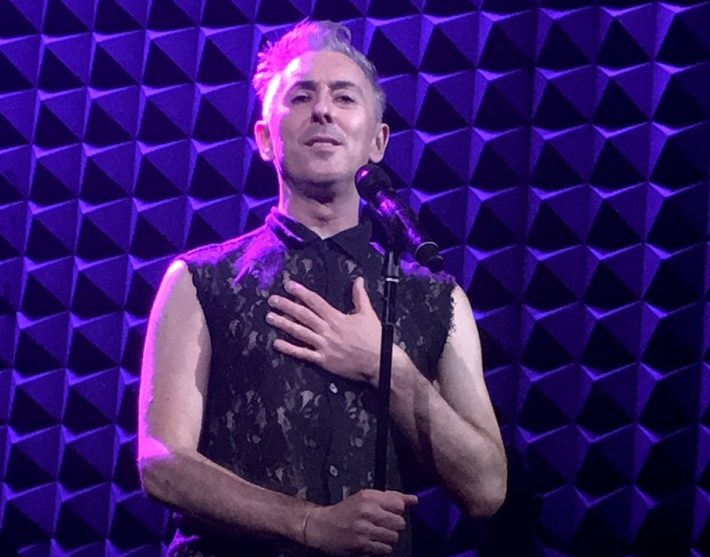 Cumming’s voice is soothing and elegant, bringing to mind 1980s-era Peter Gabriel, with that same deeply felt passion and fullness. He performed an eclectic grouping of songs, from Pink’s (Irish-German-Lithuanian-Jewish-American) “Give Me a Reason” to Edith Piaf/Marguerite Monnot’s (French), “Hymn to Love” to Lieber and Stoller’s (Jewish-American) “Is That All There Is.” In the midst of his songs, Cumming’s eyes flit from audience member to audience member, intimately, almost flirtatiously, making everyone there feel like a special guest or a friend. Unlike many cabaret shows, Cumming didn’t stick to standards, but dove into numbers (again with creative medleys) culled from Disney hits and contemporary composers that may well be standards some day, like Lin Manuel-Miranda’s (Puerto Rican-American)  “How Far I’ll Go” and “Let It Go” from Frozen by the hit making-couple of the day, Robert Lopez (Filipino American) and Kristen Anderson-Lopez (American). And with a dash of hope thrown in as an encore, he closed with a staple of adolescent auditions around the globe, “Tomorrow” (Charles Strouse/Martin Chernin – Jewish Americans) from Annie. Somehow, in Cumming’s able hands, it didn’t rankle or cause an ear worm as it often does. Instead, sticking with the message of the day, it left the audience with a sense of hope and a reminder that things change and eventually get better.