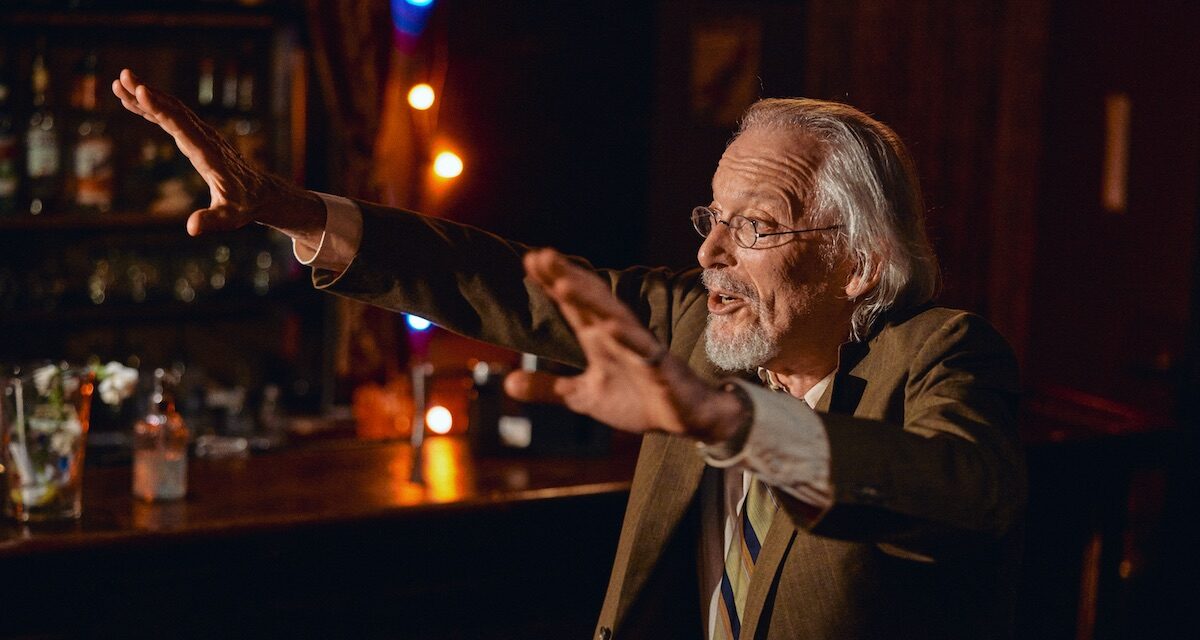 In 1956, a year before he won the Nobel Prize for Literature, Albert Camus, the Algerian-born French writer famous for his philosophical novels The Stranger and The Plague, published yet another in that vein, The Fall (La chute). It’s about a Frenchman named Jean-Baptiste Clamence delivering a confessional monologue in which he views his life in terms of universal issues of guilt and innocence.

He tells his story in Mexico City, a seedy bar he frequents nightly in the red-light district of Amsterdam, having singled out for his listener another Frenchman, whom he calls cher ami. It’s located in the heart of the city’s concentric series of canals, much like the nine circles of Dante’s Hell, a world of bad dreams. Clamence engages his new acquaintance over a period of five days during which the men walk the foggy streets, sail the misty waters, and eventually end up in Clamence’s stifling room, where he lies in bed, ill.

This premise, in which, like Strindberg’s The Stronger, one person does all the speaking and the other listens (although not “merely”), has been transformed into a solo performance for Belgian-born actor Ronald Guttman, whose English is practically accent free, with the small audience standing in for the patient auditor. In the book, Clamence often responds to unheard questions from the man; those queries have been omitted from Didier Flamand’s stage version, which, in the effort to compress the original, differs in many respects from Justin O’Brien’s standard translation. These changes range from word choices—like “judge-repentant” for the all-important “judge-penitent”—to abandoning the entire concept of moving about the city, as well as things like the oft-referred-to presence of the Dutch-speaking, apish barkeep; the episode in which Clamence was designated pope among his comrades in a German concentration camp; or what Hitler’s followers did to the local Jews.

An attempt has been made by director Alexis Lloyd to capture the ambiance of the book by having the audience reach the venue—the Club Huron lounge area in the basement of the SoHo Playhouse—via a dingy, narrow hallway leading through hanging bamboo beads into a long, small, low-ceilinged room called, as in the book, Mexico City (a joint that once actually existed in Amsterdam). A bar (and bartender) are at one end, and a tiny stage is at the other. Cocktail tables and bentwood chairs fill the space, and Clamence delivers his rambling confessional by both standing on the little stage as well as wandering around the tables, making eye contact with the patrons who, if it were a full house (ours was about half that), would probably total around 50.

Thus, what in the book is an extended one-on-one confession to a simpatico individual, becomes here a public one, losing the quality of personal (and dramatic) intimacy in favor of what could be likened to a standup philosophy routine. Unlike the book, the rationale for its existence—a paying audience coming to a saloon to hear him speak to them—remains nebulous. Mr. Guttman, with a nearly shoulder-length mane of thinning white hair, a well-trimmed white beard, and wearing a brown suit, resembles a weary college professor—somewhat older than Camus’ character—delivering a lecture. Presenting a beautifully modulated voice and pleasantly friendly demeanor, he speaks the hour-long text in a believably natural manner, making his discursive material easy to listen to, if not always easy to grasp on the fly.

The Fall’s ideas, which have been ascribed multiple interpretations, must be extricated from Clamence’s narrative. Clamence tells of his career as a successful defense lawyer and self-loving do-gooder who came to realize—after failing to act when a young woman fell (or jumped) from a bridge on the Seine—that he was a complete hypocrite, his holier-than-thou persona merely a mask put on to acquire respect and gain a godlike stature, free from judgment. Throughout, he is pursued by strange laughter seemingly aimed at him. Numerous digressions introduce subjects like death, love and sex, friendship, truth, lies, and punishment. Jesus, of course, gets his two cents as well.

By the end—following Clamence’s parade of personal experiences, including a period devoted to debauchery, and his unflagging ability to turn your preconceptions of morality on their head—all humanity is implicated in his tale of guilt and innocence, judgment and repentance, and the pervasiveness of evil.

While it can’t be denied that much of this holds intellectual interest—Camus’s literary rival, Jean-Paul Sartre, loved the book—it takes considerable mental endurance to stick with and follow Clamence’s personalized philosophical meanderings while making yourself look perpetually interested, lest Mr. Guttman’s eye fall on you in an off moment while you’re pondering what’s going to be on TV when you get home. On the other hand, my plus-one, a director/playwright who majored in philosophy, was mesmerized because he identified so closely with Clamence. In fact, I’ve rarely seen him so moved by a play. Such, say the philosophers, is theater and such is life.

The Fall. Through November 19 at SoHo Playhouse (15 Vandam Street, between Sixth Avenue and Varick Street). www.sohoplayhouse.com