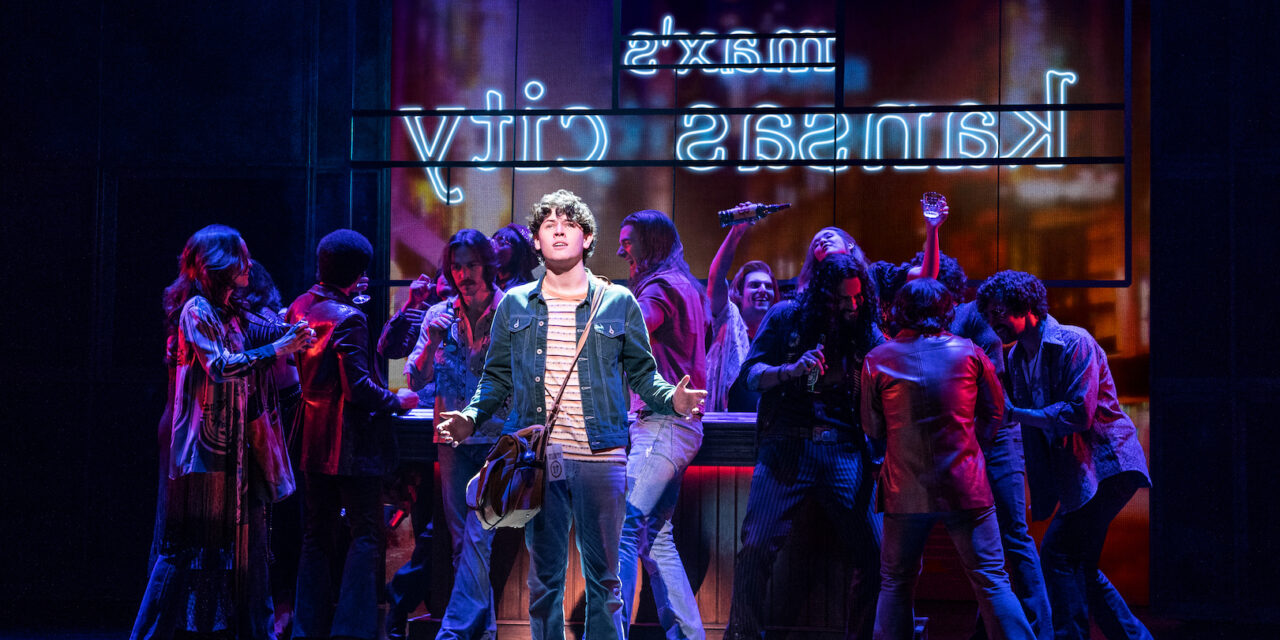 The availability on streaming and cable of so many popular mainstream movies of the past is tempting for theater reviewers about to see a show based on one of them. I fell into this trap when I viewed Cameron Crowe’s 2000 film Almost Famous just before seeing its incarnation as a Broadway musical, with book and lyrics by Mr. Crowe himself. (The new songs, mingled with many standards, are by Tom Kitt). I don’t recall being particularly impressed when I first saw the movie over 20 years ago, but I admit to falling in love with it when I watched it on TV. Sadly, this didn’t augur well for my response to the show.

Almost Famous, of course, is the story of 15-year-old William Miller (Casey Likes), a stand-in for Crowe himself, who, in 1973, gets an introduction to the rock ‘n roll fast track. Still in high school, he turns his writing talents and addiction to rock music into a gig writing for rock outlets like Creem and, most importantly, Rolling Stone. Cautioned by Creem editor Lester Bangs (Rob Colletti) to be objective (“Don’t make friends with the rock stars”), he still can’t help succumbing.

The premise of an innocent boy—younger than his immediate classmates because he skipped two grades, and not even fully aware of his age—finding himself accepted into the world of an up-and-coming (albeit fictitious) band, called Stillwater, makes perfect fodder for a coming-of-age story. What better than for all that innocence to be awash without preconceptions in a world of sex, drugs, and rock ‘n roll? In the movie, this is palpable via a brilliant cast including Kate Hudson as groupie (she prefers “Band-Aid”) Penny Lane; Billy Crudup as handsome guitarist Russell Hammond; Frances McDormand as William’s mother, Elaine; Jason Lee as lead singer Jeff Bebe, and, among others, Philip Seymour Hoffman, as cynical, uncool, slovenly, journalist-editor Lester Bangs.

The film, for all its potential sentimentalism, is a buoyant, touching journey in which the idealistic young William loses his innocence (in several senses), but nevertheless maintains his idealism as he learns deep, if painful, lessons about fandom, friendship, parental respect, romantic love, and journalism. Although it examines the over-the-top world of rock musicians, rock journalists, and rock fandom, and sometimes borders on farcical hilarity—as during an airplane flight in an electrical storm in which the frightened passengers each confess some great secret—it remains grounded in the believability and likability of its characters, even when they disappoint us. (For some probably PC reason, the drummer’s revelation, a laugh-getting punchline in the movie, has been changed to something totally innocuous in the show’s recreation of the scene.)

And all the while, we’re immersed in a soundtrack filled with representative songs from iconic stars, including Elton John, Pink Floyd, Black Sabbath, Joni Mitchell, Stevie Wonder, and the like. Many are in the show as well. Tom Kitts’s contributions, like the so-so ballad “Morocco,” have to compete with them, and don’t always rise to the occasion. On the other hand, great songs like Elton John’s “Tiny Dancer,” given by the company as they ride on their bus, is, like so much else in the show, overdone, robbing it of its emotional heart.

Necessarily episodic, even choppy, the musical hews faithfully to the film script. Mr. Crowe has made  mostly minor revisions, among them too many cheap laugh lines about what the future holds in store, like ever-present phones, and music you don’t have to pay for. It’s also too bad that, under the pumped-up direction of Jeremy Herrin, the show often goes for exaggerated characterizations that lose touch with the real world.

While it’s not necessary, of course, to find actors who come close to those in the movie, it sure does help to see the outstanding Chris Wood as Russell. That’s because he not only bears a striking resemblance to Billy Crudup, but also because he’s one of the few to provide a grounded, humanly honest performance. Most of the others, like Rob Colletti’s Lester Bangs, or Drew Gehling’s Jeff Bebe, too often go for broadness.

Patrick Fugit was 18 when he played William in 2000, but he kept the boy’s wide-eyed and bushytailed demeanor in check to make him seem believably 15. Casey Likes, the musical’s William, was 17 when he landed the role in 2019; but that was several years ago and he’s grown older. While he’s nice-looking and a terrific singer, his overacting pushes the boy’s naiveté to the brink, as if to compensate for his actual age.

Solea Pfeiffer is a gorgeous, vocally gifted Penny Lane, adored by William, but involved with Russell, who cynically wagers her away to another band in a poker game. However, tall and glamorous, with legs that never end, she seems more like a sophisticated hooker than a vulnerable young fan putting on airs of sophistication. Her Quaalude-induced breakdown is therefore less affecting. Anika Larsen as the uptight, overly protective, but defiantly loving Elaine—“Don’t do drugs” is her mantra—measures up in the role so indelibly played by Frances McDormand. And she really nails the salient points in “Elaine’s Lecture,” one of Mr. Kitt’s best contributions.

The staging, with choreography that is more vivid musical movement than conventional dance, uses one of those conventional sets (designed by Derek McLane) of metal girders and scaffolding, hinting at the framework of concert stages. Scenic units—well lit by Natasha Katz—rapidly slide and fly in and out; the fragmented nature of the show requires this kind of flexibility, but the effect is more functional than aesthetic. Very effective, though, are David Zinn’s takes on 1973 clothing, with leather, fringes, bellbottoms, boots, platform shoes, hot pants, tinted glasses, and all the other post-hippy folderol of the day.

Yes, I was disappointed by Almost Famous, doubly so for having watched the great original only two days earlier. At the same time, I can’t honestly say I wasn’t entertained and even, momentarily, touched. Cameron Crowe’s story and the world it inhabits come through despite questionable casting, less than brilliant new songs, and hyped up performances. Back in the day, I was not a fan of all the singers and songs alluded to, but my kids were; the music and the albums were inescapable. And, many of them stuck. Almost Famous could have been better, but almost doesn’t count.