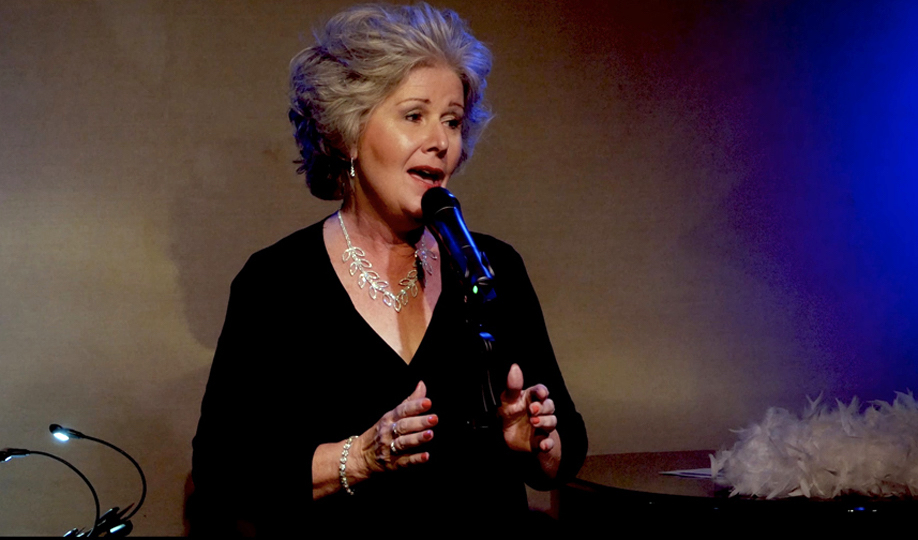 “Back in the day when there were television variety shows, these ladies would come out in beautiful gowns, sing a song and leave – clean and simple.” Tonight, with minimal patter and welcome verses, Amy Beth Williams offers this framing. Each song is inspired by a vocalist who popularized it. There’s quite a range. The versatile artist can pivot from poignant ballad to vamp or wide-eyed ingénue without residue attitude. She’s an actress.

Literally a minute into “I’ve Never Been In Love Before” (Frank Loesser), we want her to find romance! Williams looks slowly around the room seeing her audience, occasionally pausing in someone’s eyes. Just as the mood settles, Ian“I Told Ya I Love Ya, Now Get Out” (Herb Ellis/Lou Carter/Johnny Frigo) and “Alright, Okay, You Win” (Mayme Watts/Sid Wyche) follow on its heels. Ah the vicissitudes of a relationship! The last of these songs features Ian Herman’s fine boogie-woogie piano and the band’s cheerful parroting. We collectively grin.

James F. Hanley’s classic “Zing Went the Strings of My Heart” gushes bubbly and bright with side to side steps the performer can’t contain. “What else could I do again?” she sings in visible distress “…but keep repeating” her brow furrows, “I love you, love you.” An instrumental parentheses is buoyant.

“I Close My Eyes and Count to Ten” (Clive Westlake) emerges wrapped in a grand arrangement with rueful piano and (bowed, then plucked) bass. (Ritt Henn knows just how close to the bridge he needs to go to control warmth of sound.) Arms out, palms up, Williams implores “Tomorrow will you be here?” The vocalist uses her hands as naturally as breathing. Where this might seem annoyingly mannered in some, she enhances lyrics.

Bob Wills’ “I Had Someone Else Before I Had You” colored in casual irony, punctuated by small hip bumps and Jerome J. Leshay/Bobby Troup’s wonderfully deadpan “Nice Girls Don’t Stay for Breakfast” with a zinger ending, showcase an audibly raised eyebrow. “Most Gentlemen Don’t Like Love” (Cole Porter) replete with feather boa, provokes. “I’d Rather Cha-Cha Than Eat” is carbonated fun. (Murray Grand)

“Thank You for Calling” (Cindy Walker) with Henn whistling and playing ukulele (great idea) arrives a touching scene-in-one, a poem. Burt Bacharach/Hal David’s “Anyone Who Had a Heart” is gracefully understated, more affecting than common pop styling. Fisted hands rise to incremental vocal swelling. Williams ends with an effervescent vaudeville “One of Those Songs” (Gerard Calvi/Will Holt.

Caveats: “Guess Who I Saw Today?” (Murray Grand/Elise Boyd) gets too big for real despair. “I Could’ve Told You” (Jimmy Van Heusen/Carl Sigman) is uncharacteristically schmaltzy. Only some of the inspiring lady vocalists are acknowledged. I failed to grasp a story line in the sequence of song choices which, I think, would’ve upped the show a notch.

This is the second time I’ve seen Ladies. I volubly appreciated it the first time and did so again tonight. Musicianship is terrific.  Amy Beth Williams’ translucent feelings, control, taste, intelligence and sense of humor make her an artist whose outings one should not miss.