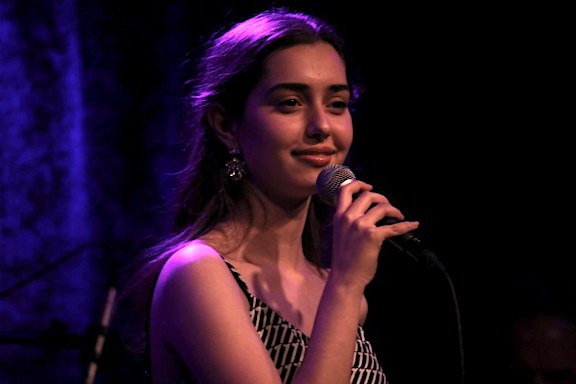 Watching and knowing the teenage Anais Reno for the past few years has been like observing a blue morpho butterfly form in slow motion.  Anais has been nurtured and carefully managed by her mother, the classical violinist Julie Kurtzman and has studied voice with her (former opera singer) father, Camille Reno, among others.  Anais received her musical training and experience at LaGuardia High School of the Performing Arts and on the stages of Birdland, 54 Below and Carnegie Hall, and stopped the show at the Cabaret Convention at Jazz at Lincoln Center in 2019.  Anais is likely the youngest old soul you’ll ever meet; she’s been “obsessed” with Frank Sinatra (her iPhone screensaver) since the age of eight.  Blessed with a rich alto voice that seems to have been lifted from a woman twice her age, the musical knowledge of someone this reviewer’s age, and the instincts of an established, seasoned professional, Anais is on the precipice of jazz stardom.  She may look and talk offstage like the teenager she is, but she’s every bit the grown woman when she sings.  At just a month shy of her eighteenth birthday, this SUNY Purchase freshman is more than ready.  She is here.

This performance celebrated Anais’s debut album, “Lovesome Thing,” which celebrates the music of Duke Ellington and Billy Strayhorn, constituting about half of the 11-song set.  The Emmet Cohen Trio began the show with an instrumental on “That Old Feeling” (Sammy Fain), setting up great expectations for the rest of the set.  Cohen, barely into his 30s, has established himself for years as one of the most inventive pianists on the scene, performing frequently with sensational jazz singer Veronica Swift in 2019.

Anais did a cold open – singing the opening line a capella, with no reference note from Emmet to find the key – on “I Ain’t Got Nothin’ but the Blues” (Duke Ellington/Don George) using her voice, musical and interpretive instincts, to make you forget that you’re hearing a young, white girl sing the blues.  She somehow sings blues and jazz with the gravitas of someone who’s lived the life described by the lyrics.

On “Les Feuilles Mortes” (Joseph Kosma/Jacques Prevert), better known as “Autumn Leaves,” Anais included the very rarely heard verse, in French (in which she is fluent), as well as a chorus of Johnny Mercer’s English lyrics.  The arrangement became an “oh, so very French” café song, before switching to a slow swing beat.

When Anais first heard Carmen McCrae sing the obscure “Would You Believe” (Cy Coleman/James Lipton), she was “never the same.”  Here we saw a woman, not a girl, singing about men, not boys, with the surety of someone far more experienced in life and love.

A fresh set of eyes brought new life to a pair of the most recorded songs in history.  Frank Sinatra, on his “Sinatra and Strings” album, recorded just the beautiful verse to “Stardust” (Hoagy Carmichael/Mitchell Parish).  Anais’s verse, partly rubato, was stunning. She brought grace and sensitivity to the rest of the song, with a long, Sinatraesque sigh on the final word of the last phrase, “My stardust melody, the memory of love’s refrain.”

Trumpeter Benny Benack II (recently reviewed here) joined Anais for “Caravan” (Juan Tizol/Duke Ellington). The song opened with a Middle Eastern-like chant.  The arrangement was filled with evocative rhythms and melodic pieces that perfectly complemented the song title.  Drummer Joe Farnsworth had his shining moment tonight, with a powerful solo of mostly tom-tom and bass drum.  Anais returned after the solo, chanting once again, with only Farnsworth’s pounding drum beat.  One could nearly see that desert caravan crossing the stage. Benack’s trumpet, standing in for Tizol’s trombone, added greatly to this piece.

“I like these emotional turbulence songs a lot,” Anais said, and addressed what apparently felt to her like the elephant in the room before tackling “Lush Life.”  She’s very well aware of how it must land for a young woman of privilege, who likely hasn’t even had her first drink, to sing a “stigmatized” song of despair written by a young, black, gay man (Strayhorn).  Though Anais is the same age as Strayhorn when he wrote “Lush Life,” she noted, wryly, “I may not be on my first divorce, but I am in my first year of college.”  Sitting on a stool next to the piano, with just Emmet to accompany her, she summoned a deep pathos she could not have experienced first-hand.  Anais sang the complicated song, with its challenging tonal twists and turns, perfectly.  (Sinatra attempted this unsuccessfully for “Only the Lonely” in 1958.)

Anais brought back the band and Benny Benack for the final planned song, “Take the A Train” (Duke Ellington/Billy Strayhorn).  At last, Anais and the band took the brakes off.  She scatted for the first time, and the quartet’s unrestrained solos were breathtaking.

A rarity at shows like this is a true encore, where the audience has to demand it and the song isn’t even on the set list.  This happened tonight, with “Satin Doll.”  Brava!