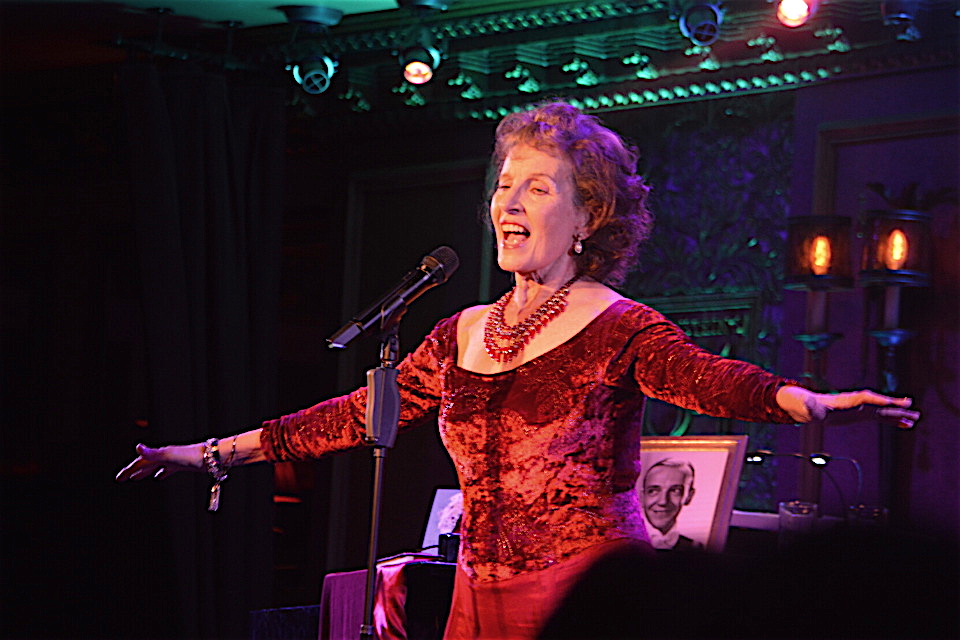 Andrea Marcovicci, a certified icon of the cabaret world, who’s been dubbed the “Queen of Cabaret,” is no less than an experience. As she herself said to her admiring audience, with a large, impish smile, “This is what I’m like.” What she’s like is a combination of wit, elegance, sophistication, knowledge (she’s a delightful repository of back stories), and warmth. Marcovicci holds the record of 25 seasons at the late and legendary Oak Room of the Algonquin Hotel; she was the final performer to grace its stage before the room shuttered for good in 2012. With such a track record, it’s no wonder a die-hard following was eager to witness this new show, A Gershwin Valentine, and also celebrate the singer’s November 18 birthday. Marcovicci’s entrance was preceded by the instrumental “Our Love Is Here To Stay,” lushly played by long-time music director Shelly Markham on piano with Jered Egan on the upright bass. When she appeared in an elegant red gown, the tone of the show, romance, love and more love, was instantly conveyed. Upon the piano was a framed photo of Fred Astaire, a hero of the diva, who sang pretty much the entire George and Ira Gershwin songbook in his day. Marcovicci followed suit with many of the standards, including “I’ve Got a Crush on You/Embraceable You,” “He Loves and She Loves/It’s Wonderful” and “But Not For Me/Boy Wanted.”  Her style throughout was relaxed, at a slow tempo. As the years have advanced Marcovicci has learned how to work with her voice, relying on technique to help her with vibrato and vocal chord strain. Her phrasing and breath control are excellent, but it’s her training as an actress that carries the day. Marcovicci is a story-teller, and although her approach even in her salad days was somewhat eccentric, she makes good use of her style to deliver maximum meaning in a lyric.

A surprising part of the evening was Marcovicci’s announcement that she’d never before sung “Let’s Call the Whole Thing Off.” It was thus performed in a duet with Markham, as was one of Gershwin’s first compositions (with lyrics by Irving Caesar and Alfred Bryan) “I Was So Young and You Were So Beautiful.” Markham’s arrangement made this 1926 gem sound like a contemporary country song. There were other Gershwin standards to be had, both mainstream and arcane, such as “Blah, Blah, Blah” and “The Half of It Dearie Blues.” Style was a byword of A Gershwin Valentine, and Marcovicci dispensed plenty of that. She possesses the stage. She is its empress and a welcoming hostess to an audience with whom she establishes instant contact and rapport. For well-rounded entertainment she recites poetry: another hero, Edna St. Vincent Millay, plus Dorothy Parker, Ogden Nash and the 1918 Pulitzer Prize winner for a volume of poetry entitled, Love Songs, Sara Teasdale. There were props too, such as sheet music and photos. All in all, an eclectic combination of elements added up to a performance that was more than the sum of its parts. In this Marcovicci accomplished her goal and delivered well her valentine to George and Ira Gershwin. Although some of her vocal efforts were more successful than others, the end-product was an endearing respite from modern anxieties into a simpler world – an era of love and romance, when Fred and Ginger danced to Gershwin melodies on elegant New York dance floors and a good time was had by all.