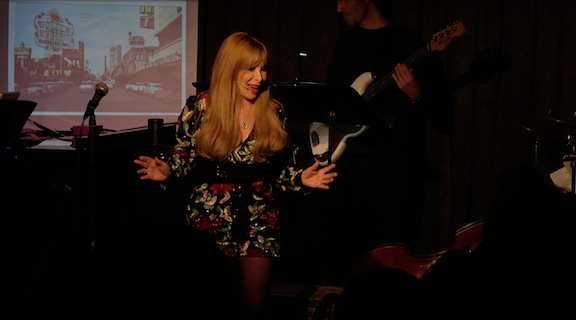 Andrea Wolff is a tiny little gal with a big act that lays out her show business career in an exciting, all-too-short 75 minutes of songs, sketches and multimedia.  The petite, 4’10” Wolff brings power, pizzazz and personality aplenty to a show that seems almost too much for Don’t Tell Mama’s compact stage.  She was backed by a trio and “special guest” Elliott Litherland, who played a number of minor but pivotal characters, and sometimes sang with her, in addition to assisting Wolff with all manner of prop devices and creative costume changes.  Both Wolff and Litherland used the kind of flesh-colored lavalier mics seen in Broadway productions, which gave the show a professional and seamless edge.

Wolff has had a fascinating life as an entertainer for more than half a century.  With the assistance of her actual 1969 diary and the very tall, handsome Litherland, she spoke of romances, heartache, and the opportunities she has had in more than half a century in entertainment.  Speaking of her early days as a New York entertainer with mixed success, she had an exaggerated “Noo Yawk” accent and seemingly a smoker’s voice.  While she opened with “I Am Playing Me” (Jeff Bowen), the voice was a put-on, a harbinger of the various characters and vocal changes she affected in both her patter and singing.  When the narrative takes Wolff to her pivotal decision to move to Las Vegas at the age of 19, the show really picks up steam.  Wolff’s year in Vegas defines much of her life story and is the heart of this show.

Wolff’s role in the legendary “Bottoms Up” review in Vegas made for compelling stories and songs.  There was much fun name dropping of the people she worked with and, in some cases, lost roles to, including Dorothy Lamour, EJ Peeker and Mitzi Gaynor.  In the delightful “Big Time” (Frank Wildhorn, Jack Murphy), with Litherland’s vocal assistance, she wore a boa and a giant headdress so “heavy” it nearly toppled her, though that was also a bit.  For “Keep on Running” (Jackie Edwards), Wolff, when describing her lust for singer Grant Smith (who had the hit of the song), she said, to great laughs, “At this point, my underpants were stuck to my seat.”

Wolff recreated a “Bottoms Up” number, “Sex Education” (Suzanne Buhrer), now in costume and believable as a stereotypical, bent-over old lady.  The song was naughty and funny, and near the song’s end, she stripped down to reveal her sexy self.

After another bad romance, “I was now seeking connection,” Wolff said, revealing her vulnerability in a ballad arrangement of the pop hit “Dance with Somebody” (Shannon Rubicam/George Merrill), for the first time singing without any shtick.

Her friendship with lesbian showgirl Rusty Warren made for delicious comedy.  Rusty was interested in Wolff, but she let her down humorously with a great line, “Deep-sea diving isn’t really my thing,” to huge laughter.  She performed Warren’s song “Bounce Your Boobies” and, with Litherland holding cue cards for the audience, encouraged the women in the crowd to participate in the bouncing.  At “72 and proud,” the shapely Wolff still has the bodacious figure to flaunt in a number like this.

In “Hot Dog Song” (Tausha Hammed/Clarence Williams), Wolff presented “interpretive dancing.  The audience interprets it one way, the Catholic Church another,” to big laughs.  She declared “I want a hot dog for my roll!” (the 1927 song’s original title) in a cutesy, Betty Boop-like character.  With Litherland now in costume as a boy-toy hotdog vendor, she found a rather large, wrapped sausage the size of a Hebrew National salami in his basket.  This number was probably quite risqué even in 1969.  It was hysterical, and the audience ate it up, so to speak.

Andrea Wolff’s Vegas Adventure is a funny, sexy, well-produced show bursting at the seams of its current incarnation at Don’t Tell Mama.  The show will likely be back here in January 2022.