“After All” it’s Anita Gillette 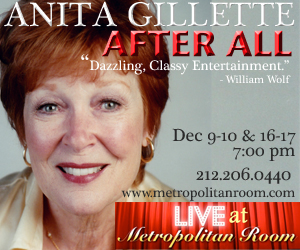 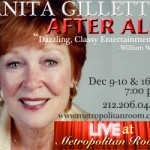 Expect a deliciously delightful evening of music from Tony Award nominated actress Anita Gillette at the Metropolitan Room on December 9th & 10th and 16th & 17th (all at 7:00 pm).  The show is filled with touching memories and a hilarious look behind the scenes from Broadway to Hollywood.  Yes, it’s all autobiographical and boy does this lady have a lot to tell!

From her years as a young showgirl in the original cast of Gypsy with Ethel Merman, to days of David Merrick and Gower Champion in Carnvival, to her Tony nominated performance in Neil Simon’s Chapter Two  – – Major feature films included Moonstruck and co-starring roles in TV shows Quincy, 30 Rock, Modern Family.

Sure to be an evening of great music, backstage gossip and lots of personal memories.

The show is directed by Barry Kleinbort with musical direction by Paul Greenwood.