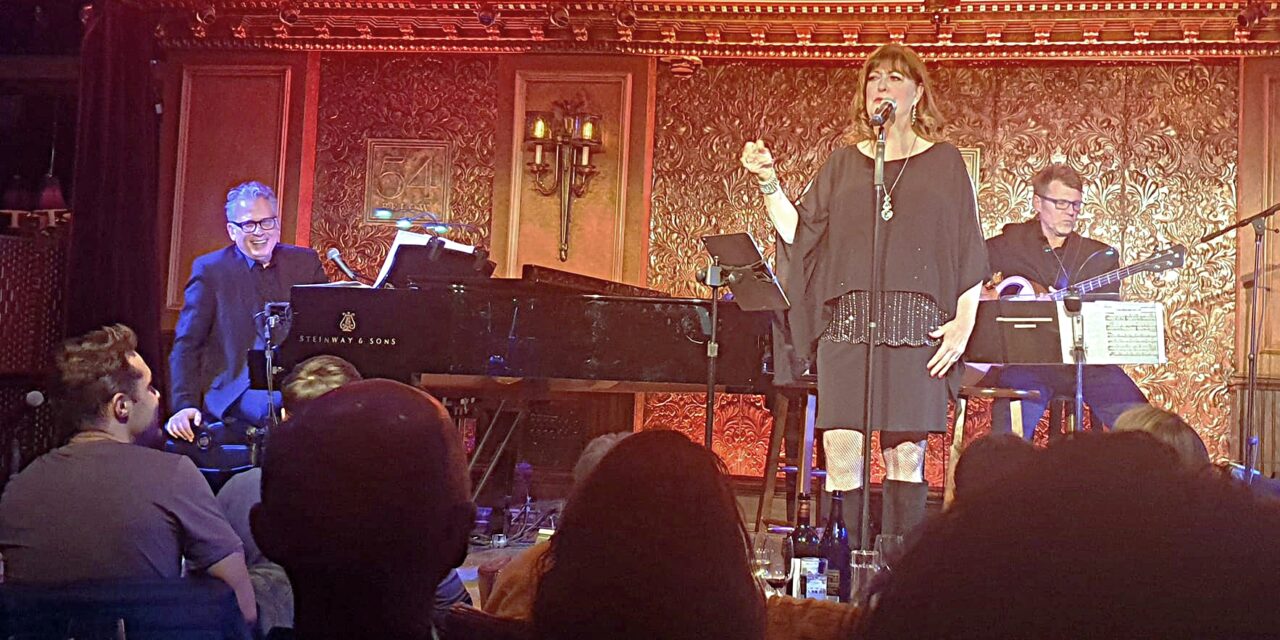 The fabulous Ann Hampton Callaway performed a special APAP (Association of Performing Arts Professionals) showcase Sunday night at 54 Below. The show was open to the ticket-buying public, though good luck getting a table, as every last seat was sold out or inhabited by a badge-wearing APAP attendee. The show was also available for live-streaming through the club.

This unique show was crafted to present multiple sides of everyone’s favorite diva to the talent bookers and agents who engage artists all over the world. As such, the star performed roughly half each of her Peggy Lee celebration (reviewed HERE) and her “’70s” show of great songs from that decade. Ann recorded her latest disc, Fever: A Peggy Lee Celebration!, with a quartet led by her frequent accompanist, Ted Rosenthal, who had to bow out of the show just hours before showtime; Ann had the great fortune of finding the celebrated and usually booked Billy Stritch available. Whew!

The star, dazzling in a short black outfit with fringes, was also accompanied by bassist Martin Wind and drummer Tim Horner, both of whom appear on the new album, which is terrific. The band also dressed in “New York black.”

The set opened with “I Love Being Here with You,” one of the more than 250 songs written by Miss Peggy Lee. In typical Callaway fashion, she ad-libbed a funny line or two, like “I’d like to kiss . . . George Clooney’s nose.”  Similarly, in “Fever,” the album opener, which largely followed the Peggy Lee chart, the star added her own special lyrics in homage to Ms. Lee and the love of her life, guitarist Dave Barbour.

Ms. Callaway’s rendition of “The Folks Who Live on the Hill,” one of the oldest songs in the set list (composed by Jerome Kern and Oscar Hammerstein II in 1937), was simply gorgeous.

The first, very welcome surprise came thanks to Billy Stritch’s presence. Billy sings as well as he plays, and the last-minute switch, you might say, made Champagne out of lemons with the first of two previously unscheduled duets, “The Glory of Love” (which features John Pizzarelli, Jr. on the new album). The pair had fun with this duet, with great harmonies and a bit of scat singing. Billy momentarily lapsed on the lyrics, describing this afterwards as “deer in the lyric headlights.”

The other high point of the Peggy Lee portion of the show was a sizzling blues ballad of “Black Coffee,” which Ann jokingly dedicated to “the single and bitter people here.” Goosebumps! It’s on the album, kids!

For the “70s” half of the set, Ms. Callaway found “the perfect bridge” to transition between shows, with Paul Simon’s “Bridge Over Troubled Water,” which was the title of a 1970 Peggy Lee album. The arrangement, with something of a pop-rock, R&B gospel tinge, was a very different take on the original Simon and Garfunkel recording. It was a powerful, moving number.

Ann briefly returned to her 1970s roots as a singer-pianist in small clubs when she took over at the Steinway to perform, completely solo, Joni Mitchell’s “A Case of You.” It was a breathtaking, “wow” moment.

Ms. Callaway is a very funny lady, too, with engaging patter and great ad-libs that prompted much laughter. In a marvelous bit, Ann feigned big surprise at spotting her “ex-husband” (a random customer) at a ringside table, his back to her, and playfully made him the butt of her largely improvised material, with numerous callbacks for the rest of the show.

After a moving “Landslide” (Stevie Nicks), in which Martin Wind played his acoustic bass like a guitar on the solo, Billy Stritch provided harmonies for Ann on Warren Zevon’s “Poor Poor Pitiful Me,” with a country/rock chart. It was the second song to take advantage of Stritch’s presence.

Ann’s take on Billy Joel’s “New York State of Mind” as a fast, bluesy R&B was quite refreshing for this somewhat overplayed song. But it was the next, “final” song that brought the biggest surprise of the evening, as her sister, Broadway and cabaret star Liz Callaway, came up for a duet on Carole King’s “You’ve Got a Friend.” It’s always a treat to see the sisters perform together. The audience was encouraged to provide backup vocals, and the pair earned a standing ovation from the rapturous crowd.

For an encore—“Wouldn’t it be awkward if I came back out here and ‘that’s all there is’?”—Ms. Callaway performed a sensitive version of John Lennon’s iconic “Imagine.” Let’s imagine a world with more Ann Hampton Callaway!