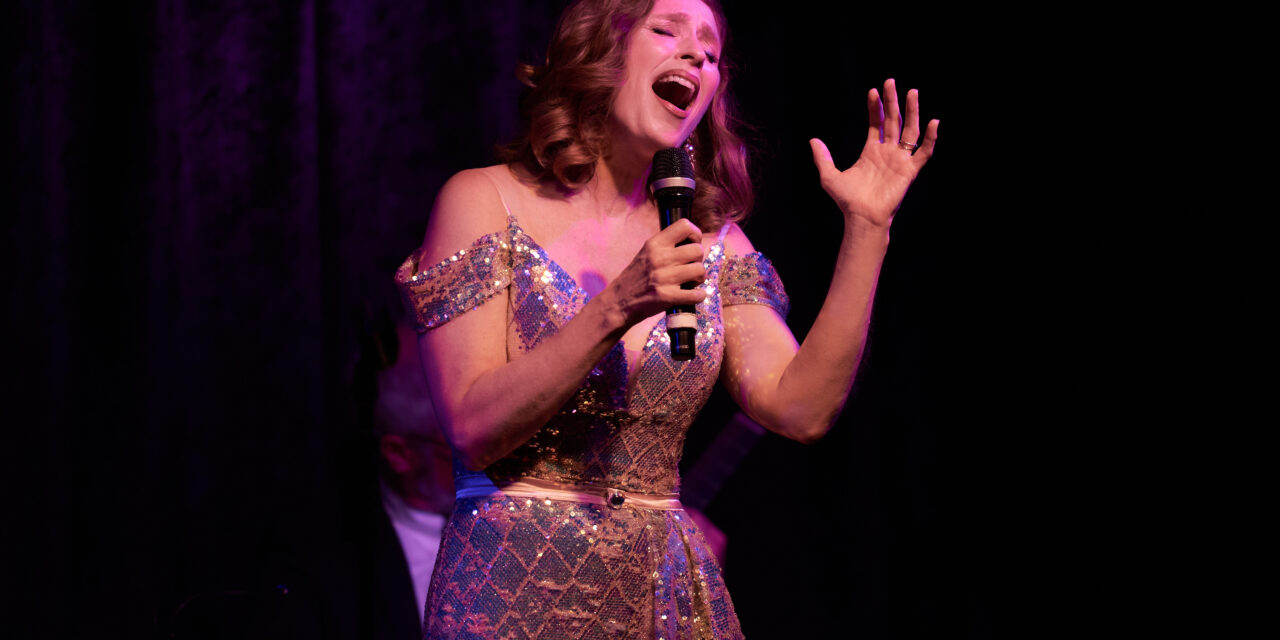 Hooray for Hollywood!  Award-winning cabaret performer Ann Kittredge is a sophisticated, tall lady who exudes elegance and warmth.  With classic beauty and a gorgeous gown, she was a 1940s film poster come to life.  Ann’s rich, powerful mezzo voice glistens with class.  For her first live appearance since The Pause of 2020, Ann presented a rich history of Hollywood music, mainly songs of hope, love and lost love, with wonderful anecdotes about the movies and the performers who introduced them to set up the songs.  With musical director and pianist Alex Rybeck and guitarist Sean Harkness, a great pairing with this fine wine, this promised to be an intimate, delicious evening, even if the old-fashioned box of movie popcorn would not be shared with the sold-out, enthusiastic Birdland audience on October 10.

The song choices were diverse, wonderful, and sometimes surprising, not only for their inclusion but for the approaches Ann took to them.

For a show celebrating movie songs we may or may not remember, the opening line, “You must remember this” from “As Time Goes By” (Herman Hupfeld), most famously sung by Dooley Wilson in “Casablanca,” made this a clever beginning as a ballad before taking on a faster, rhumba beat.

Ann gave new life to “Another Day in the Sun” (Justin Hurwitz, Benj Pasek and Justin Paul), the opening dance number from “La La Land,” one of those hummable yet forgettable movie songs where the melody is heard everywhere in the movie, in many styles, whether played by an orchestra in a nightclub, sung by roommates getting ready for clubbing, or a jazz pianist riffing.  Despite its ubiquity in the film, this would be a throwaway song for most performers, but not Ann.

Fred Astaire was coveted by songwriters for his ability to turn their songs into gold when he introduced them in films.  Ann paid homage to Fred (and Ginger) with a terrific medley of seven Irving Berlin songs, including “Top Hat,” “Cheek to Cheek” and “It Only Happens When I Dance with You”, “We’re a Couple of Swells,” in which Rybeck provided fun vocal assistance. Gown flowing, Ann did her best Ginger Rogers, dancing for several moments.  “She sang backwards, too,” she said of Astaire’s most beloved dance partner.

War movies have produced some of the greatest, most memorable movie songs.  Ann delivered the delightful and funny “You’re Either Too Young or Too Old” (Arthur Schwartz/Frank Loesser) with humor and flair. It was certainly a surprise to learn that this song was introduced by, of all people, Bette Davis, in “Thank Your Lucky Stars.”  With Ann’s 95-year-old mother in the front row, Ann made playful fun of her age when mentioning the next song, introduced 86 years ago (“You remember this, right Mom?”), and that of Mom’s slightly younger aunt, who was also present.

It’s fair to say the last song anyone would expect to induce tears would be “Ah, Sweet Mystery of Life” (Victor Herbert). She told us the tragic love story of early movie stars Nelson Eddy and Jeanette MacDonald, who introduced the song.  Forced to keep their offscreen love a secret through eight films together, and despite marrying other people, they loved one another until their deaths.  Singing with just Sean Harkness, who played guitar up front for this one, off-book (“I had to memorize that one!”), this once sappy operetta song, completely reimagined and reframed here brought out its true poignancy and was literally breathtaking.

Alex Rybeck is a master accompanist, and his arrangements, particularly of the medleys, were exceptional with five “torch songs” written like an overture.  The piano foreshadowed “The Man That Got Away” with its opening vamp before Ann sang “Stormy Weather” to start the medley.  This especially well-crafted combination of songs associated in movies with Lena Horne (“Stormy Weather”), Barbra Streisand (“My Man”), Frank Sinatra (“I Fall in Love Too Easily”) and Judy Garland (“The Man That Got Away”), were woven effortlessly with the duo’s support, particularly by Rybeck’s inventive placing of the various song phrases to set the mood and create tension.

Ann finished with a perfectly sung, a cappella “When You Wish Upon a Star” (Leigh Harline/Ned Washington), a song introduced by a talking cricket in Disney’s “Pinocchio” – – here sung by the star.  Goosebumps included.  Brava!

While there is no upcoming performance of this show currently scheduled, Ann’s new album, “Reimagine,” is soon to be released.  If her reimagined songs are any indication, this will be a recording that will get much play on your Hi-Fi. Or Wi‑Fi, this being 2021. www.birdlandjazz.com

After Show photos by Andrew Poretz