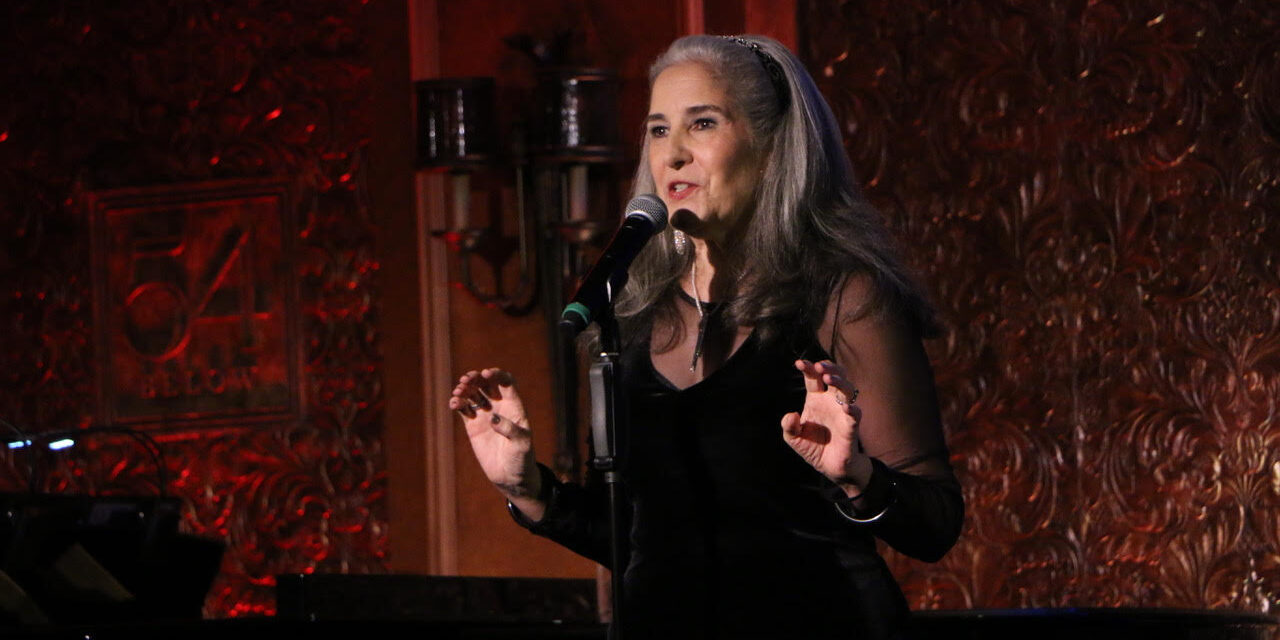 “The Shadow of Her Smile”

Imagine spending much of your young life constantly being told, “You look just like Elizabeth Taylor… in National Velvet!” The endless comparison to a 12-year-old Elizabeth Taylor was a reality for performer Ann Talman, a veteran of four Broadway shows and a memorable character on an episode of Seinfeld, but with quite the twist:  at 24, she played Elizabeth Taylor’s daughter on Broadway in Little Foxes, and became “BFFs” with the legendary star to her dying day.  This might at first seem like a thin premise for an entire cabaret show, but Ms. Talman, under the masterful direction of Lina Koutrakos, has created an absolutely marvelous concoction of intimate stories, music and laughter, with which she made her 54 Below debut in March 2022.  For this successful, two-night reprise of The Shadow of Her Smile, droves of cabaret and Broadway stars were in attendance.

From the venue’s “wings,” Ann sang the opening of “The Shadow of Your Smile” (Johnny Mandel/Paul Francis Webster), like a disembodied voice, before coming to the stage to join music director Alex Rybeck.  Her approach, as it would be for many of the songs, was to add snippets of story to the song.  When she landed the role in Little Foxes and met Elizabeth Taylor for the first time, the star exclaimed, “Oh God, I feel like I’m looking at myself in National Velvet!” Ann replied, guilelessly, “Oh, I never heard that before!”  It was both of their Broadway debuts, and they joined Actors Equity together.

The after-party for the Little Foxes opening was, she said, pointing to the ceiling, at Studio 54, then a world-famous disco and today home to the Roundabout Theater Company.  Ann noted, drily, that 54 Below was the location of the infamous VIP room at that time.  “Oh, if they could see me now!” she said, breaking into “If My Friends Could See Me Now!” (Cy Coleman/Dorothy Fields).  It was a huge moment in the show.

Ann’s hysterically funny description of her and Elizabeth Taylor’s diet attempts and food binges, and watching old movies while wearing matching caftans, was perfectly paired with “The Dieter’s Prayer” (Joel Silberman/Amanda McBroom).  This tune has such wonderful lines as “Make me believe that tofu’s a food, and not something you made up when you were in a bad mood.”  Ann told of delicious pranks Liz would pull on the cast every night.  In these stories, she showed the warmth, humor and incredible generosity of the late actress that created a sense of empathy and love for Ms. Taylor.

When she recited Ms. Taylor’s four rules for dealing with the press, Ann showed her physical comedy prowess when she demonstrated “how to enter and exit a limo and never get a crotch shot” from the paparazzi by recreating the move at the piano bench, as if it were the back seat of the limo.  Liz advised her to “Crazy Glue your legs together!”

Ann once asked Liz why she kept getting married, and sang the lovely ballad, “Why Did I Choose You?” (Michael Leonard/Herbert Martin).  The star recounted each of Ms. Taylor’s eight marriages, and when she mentioned the star’s two marriages to Richard Burton, she did a remarkably accurate and funny impression of the actor.  Notably, Burton’s daughter, Kate, was in the audience, and was suitably impressed.  At that, she sang Burton’s iconic “How to Handle a Woman” from Camelot (Frederick Loew/Alan Jay Lerner).

The show’s surprising pièce de résistance was something of an emotional “bait and switch.” After reciting a long quote from Elizabeth Taylor’s 1991 interview with James Grissom and a closing number of “Make Someone Happy” (Jule Styne/Betty Comden and Adolph Green), Ann left the stage.  A strong ovation brought her back for an encore.  This reprise of “The Shadow of Her Smile” was so powerful, the show would not have had the same impact without it.  By this time, not only had Ann painted vivid scenes of her relationship with Elizabeth Taylor, she created a new one for the listener and Liz.  Now, the same song evoked a flood of tears.  She pulled this off so deftly, frankly, that I did not know what hit me.

The Shadow of Her Smile is a gem of a show.  Ann Talman is an appealing performer.  She is funny, a terrific writer and storyteller, and has impeccable timing.  While the script is strong enough to hold its own as a comedic monolog, Ann is an excellent singer with a lovely voice, and the well-chosen songs helped move the story along perfectly.

Ann Talman: The Shadow of Her Smile took place September 13 and 14 at 54 Below, 254 West 54th Street (between Eighth Avenue and Broadway). www.54below.com