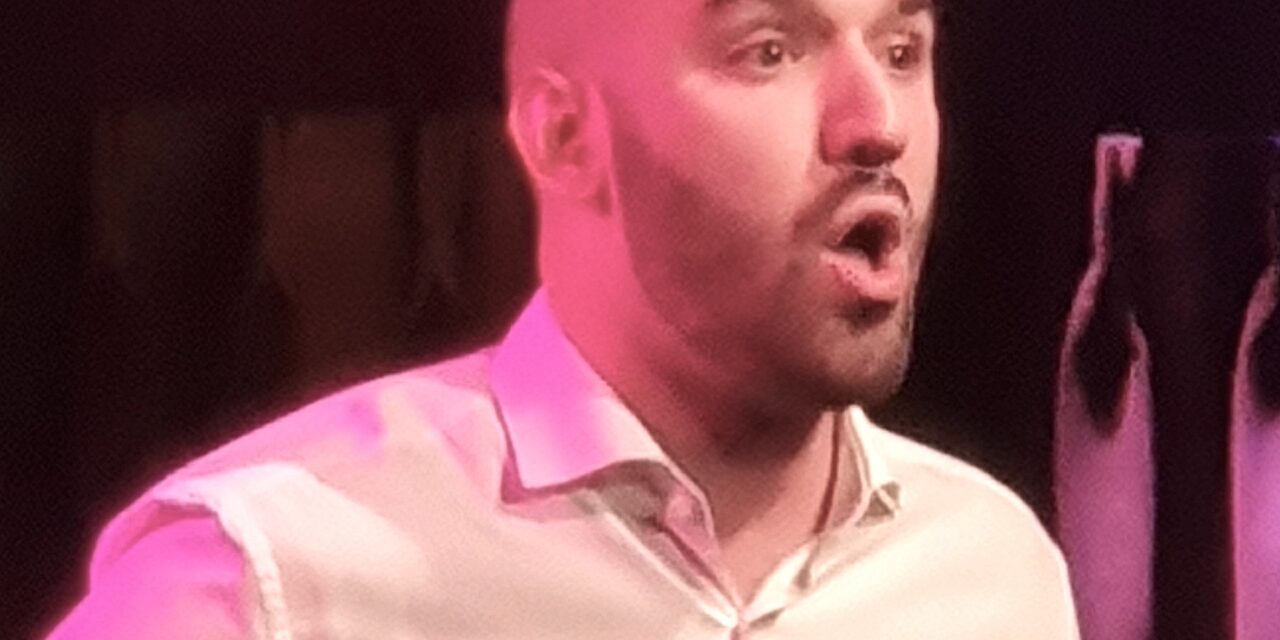 If you look up the word “heart” in the dictionary, there ought to be a photo of performer Ari Axelrod.   This talented fellow is a beautiful, sensitive soul with the voice of an angel.  He is also a proud Jew, whose knowledge of the material and fine performance skills amounted to a crash master class in Broadway musical history from the Jewish perspective, in A Celebration of Jewish Broadway.  The award-winning show has played to capacity audiences at Birdland a few blocks away, as well as in St. Louis, Chicago, Boca Raton, and Ari’s hometown of Ann Arbor, Michigan.  Tonight’s show at The Green Room 42 was another full house for the performer, who was also celebrating his birthday.  And what a swell party it was!

While Ari is neither a rabbi nor a cantor, his remarkable gifts for storytelling and his sizeable performance skills may well have been honed from great rabbinical and cantorial leadership he experienced in synagogue.  In A Celebration of Jewish Broadway, Ari successfully enlightened the rapt Green Room 42 crowd with his personal stories and his entertaining Jewish history lessons, while deftly weaving in some of the best songs from composers such as Irving Berlin and George Gershwin, to more modern songwriters like Jerry Herman, Carole King and Stephen Schwartz.

The opening number, “Something’s Coming,” was one of several from West Side Story, with a score written by Leonard Bernstein and Stephen Sondheim.  Throughout the evening, Ari spoke of the Jewish experience and the effect of wars, immigration and cultural assimilation on the evolution of musical theater in America.  What we now refer to as the “Great American Songbook” largely consists of songs that originally appeared in Broadway shows, with an inordinately high number written by Jewish composers and lyricists.

It was fascinating to learn, for example, that many of the great songs written by the likes of Jewish immigrants (or their first-generation children) like the aforementioned Irving Berlin (née Israel Beilin) and George Gershwin (née Jacob Gershowitz) had their genesis in melodies they learned in the temple.  Gershwin, for example, took parts of the Hebrew call to prayer to create “It Ain’t Necessary So” (Porgy and Bess).  To prove this point, Ari sang snippets of these melodies and then their surprising, secular counterparts in very popular, well-known songs.  The great success awarded to these songwriters was not lost on the decidedly non-Jewish Cole Porter, who then developed songs based on Jewish melodies.  For instance, “You’d Be So Nice to Come Home To” is based on a Jewish lullaby, and “My Heart Belongs to Daddy” is based on traditional Jewish minor harmonics.  Ari’s willingness to reveal his vulnerability was never more apparent than on “So in Love” from Porter’s Kiss Me, Kate. Here, his slow, delicate approach to the love song created a moment of extraordinary passion.

Ari declared, “To be a Jew in America means that someone in their family had to have endured a tremendous hardship.”  A photo of his great grandfather was shown on the monitors, along with the story, to help make that hardship personal.

“Will You Still Love Me Tomorrow?” (Carole King/Gerry Goffin) was written for the girl group The Shirelles as a poppy, uptempo ballad, and made the cut here by dint of its appearance in the Carole King biographical musical “Beautiful.”  King later recorded a slower, torchy version in 1971.  Tonight, Ari Axelrod slowed it down even more, with nothing but Lawrence Yurman’s delicate accompaniment, and made a grown man cry.  Yurman’s outstanding accompaniment was notable throughout for its subtlety.  He provided the perfect vessel for Ari’s performance, giving the star unrivaled support while staying out of his way.

“Cool” (Leonard Bernstein/Stephen Sondheim) was Ari’s ace in the hole.  An accomplished conga player, Ari incorporated all of the rhythms of the movie scene — the dancing, the street sounds, everything — into a spectacular explosion of percussion and gorgeous singing.

Like the brilliant tag line for Levy’s Jewish Rye Bread, “You Don’t Have to Be Jewish to Love Levy’s,” one does not have to be Jewish to love A Celebration of Jewish Broadway, a show that ought to be seen by many more people, maybe in a larger venue.  Meanwhile, Ari Axelrod’s next scheduled performance is Ari‘s Arias at Birdland Theater on June 30, 2022, which will be recorded as a live album.  You can learn more about Ari at https://www.ariaxelrod.com.