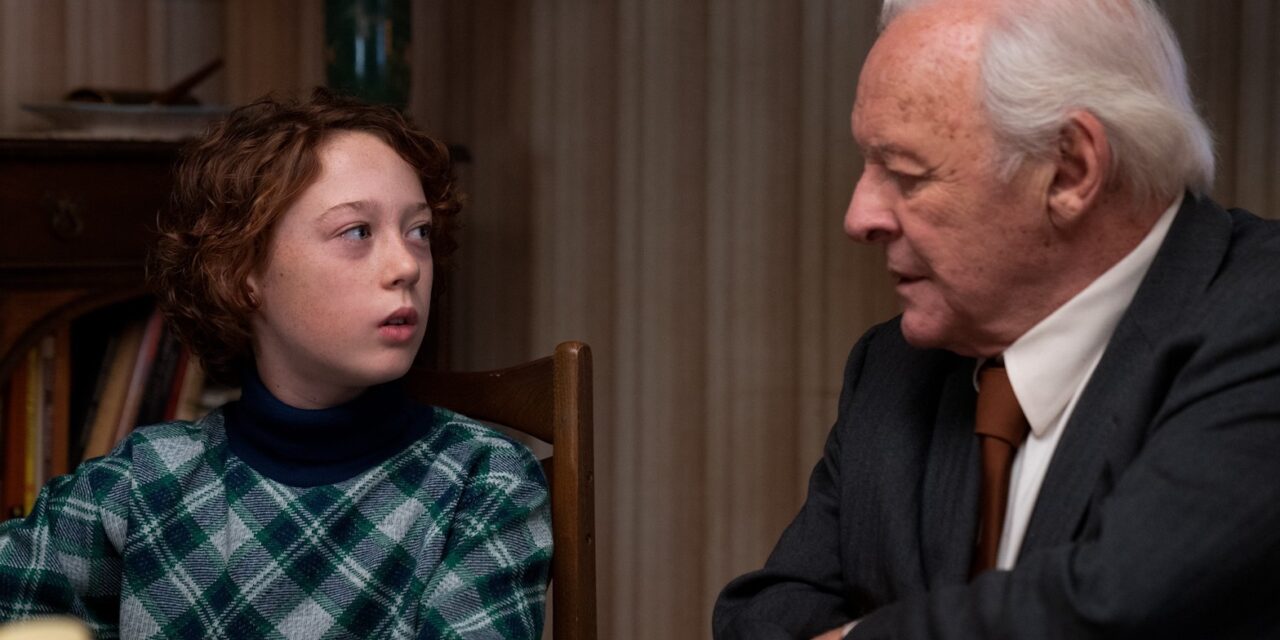 Cine-memoir is difficult to approach, but with acute sensitivity writer-director James Gray (The Lost City of Z) does a yeoman’s job tackling his most personal film. Armageddon Time recently enjoyed its World Premiere at New York Film Festival 2022. Gray’s superb cinematography recreates Queens, 1980 in the interior and exterior set designs, filtered lighting, and staid shot compositions. These combine to create a tone of nostalgia and angst and themes that are relevant to us today.

During the backdrop of ominous sociopolitical change on the eve of the Reagan era, Gray shadows his character surrogate Paul Graff (Michael Banks Repeta), a socially awkward sixth-grader whose ambition is to become an artist (Gray’s own personal goal). In the opening scenes, we discover a lively Jewish family of modest means who get together weekly for dinner with grandparents and their aunt and uncle. The family includes beloved maternal grandfather Aaron (portrayed by the wonderful Antony Hopkins), his wife Grandma Mickey (Tovah Feldshuh), harried PTA mom (Anne Hathaway, refreshingly against type) and nervous, financially overburdened father (Jeremy Strong as a nebbishy plumber).

After his parents allow him to go to public middle school rather than private school, Paul immediately gets into trouble on the first day. Ignoring the lesson, he draws an excellent likeness of the face of his teacher, Mr. Turkeltaub (Andrew Polk), on the body of a fat duck. When Paul tries to explain that he wanted to make the other kids laugh, he is supported in misbehavior by Johnny Davis (Jaylin Webb, in a heartfelt, dynamic performance). Johnny is the only black kid in the class who is repeating the sixth grade, an embarrassment that Mr. Turkeltaub sarcastically rubs in. When Johnny stands up for himself, he gets punished with Paul, and the two outlaws’ friendship is cemented.

Turkeltaub’s strictness and their need for attention and fun provoke additional antics inside and outside of school that incur punishments which increase with severity commensurate with their bad behavior. However, in that very first classroom scene with Paul and Johnny, Gray initiates the themes of discrimination and injustice. For Turkeltaub responds more favorably to Paul than he does to Johnny.

Gray draws Paul’s and Johnny’s contrasting socioeconomic backgrounds with heartbreaking humanity. Because of Johnny’s race, his difficulties in being raised by his grandmother and lack of parental support, his future is filled with potential liabilities. Despite desperately needing proper guidance, none is offered by the school; the only support he receives is from Paul, who is naïve and can only help by being his outlaw friend, which exacerbates Johnny’s problems. Clearly, Paul, as his family suggests, faces discrimination because he is Jewish. Nevertheless, he has more opportunities because of his background and race than Johnny.

When his beloved grandfather discovers he is getting into trouble, he gives Paul’s parents the funds to send Paul to the private school that his brother attends. With sobriety and love, Aaron discusses the discrimination he faced, an addendum to family discussions of the Holocaust and fear of Republican conservatism with the rise of Ronald Reagan’s candidacy for President. Hopkins’ Aaron, a Ukrainian-English immigrant, who’s seen humanity’s ugliest warts, advises Paul with rough kindness emerging from his own cruel life experience

Paul senses the culture is off-kilter and continues his relationship with Johnny, preferring the free-wheeling fun they have. However, once he begins attending the private school, there is a shift and emphasis on discipline and hard work. Unlike the public school, the private school inculcates materialistic values and monetary ideas of success in the minds of the students through guest speeches given by Fred Trump (John Diehl), and daughter Maryanne Trump (Jessica Chastain), who donate heavily to the school. (This is true to Gray’s biography.)

Influenced by his parents and his grandfather’s encouragement to continue with his love of art, Paul attempts to make his way but he missteps and misleads Johnny to follow him down a path of no return. Thus, the days of their friendship end because of the racial oppression in a culture that treats Paul differently from Johnny—something Paul’s father and Aaron discuss with him after the police pick them up for theft.

The brilliance of the film is how Gray shows the converging influences on Paul from his grandfather and parents, as well as his relationship with Johnny. All help him realize the vicissitudes of life caused by a heartless and discriminatory society. It is a society which his family acknowledges is unfair and that he despises. However, he is at a turning point. Somehow, he must learn to negotiate its egregiousness, apply his talent and love for art, and get to the next day.

At the end of the film, Johnny makes a sacrifice for Paul as the ironic hero during Paul’s passage to adulthood. Gray relates this to the film’s themes, suggesting that white culture benefits from racial and ethnic inequities. With the Reagan era dawning, the oppressions will only get worse, hence the film’s title.

The performances are terrific. Repeta and Webb are a sensational team. Hathaway and Strong are so authentic they recall one’s own parents’ love, sternness, anger and guilt. Of course, Hopkins’ Aaron is the grandfather everyone would love to have, though he is the most bitterly realistic of the family. Some scenes—for example, the one where Strong’s father punishes Paul in the bathroom with a belt—are a terrifying reminder of how out-of-control parents are when attempting to guide their children to stay out of trouble, yet all the while pushing them toward it, making them feel doomed, resentful and angry.

As with most of Gray’s work, the funny moments blend with the poignant ones to make for a profound and bittersweet film about family and the loneliness of growing up in a culture that alienates with cruelty. This is one to see. Look for it in theaters or streaming online.

Armageddon Time is now in movie theaters near you.