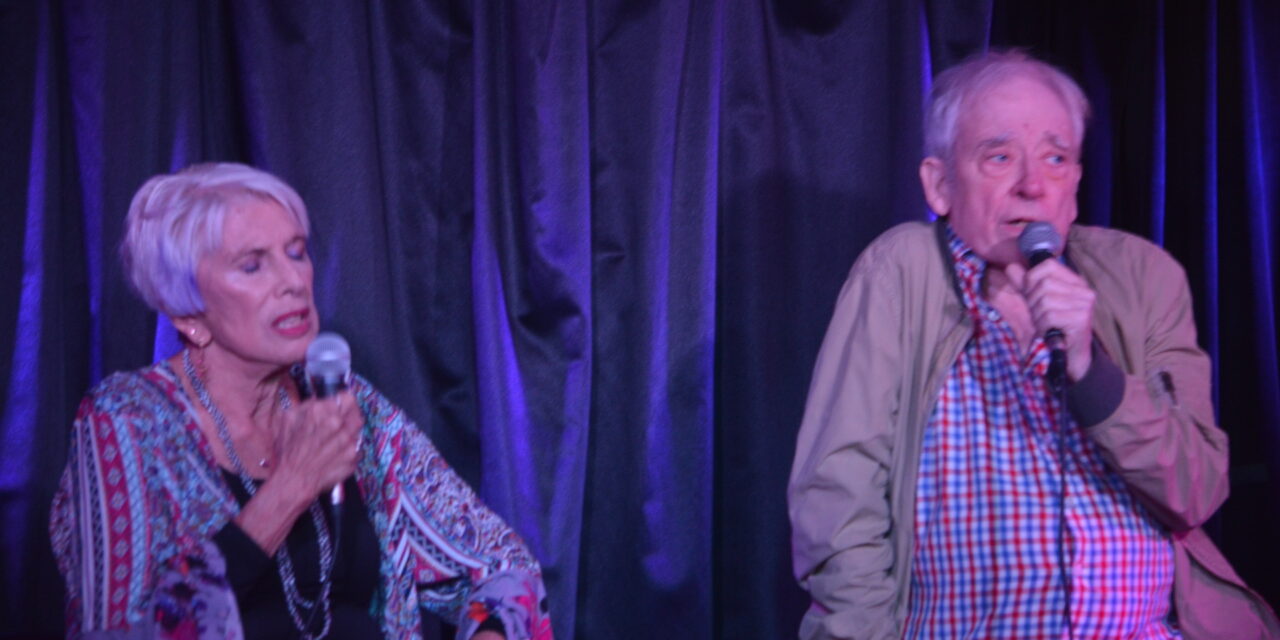 The duo of Austin Pendleton and Barbara Bleier returned to Pangea, where they’ve performed several shows since 2016.  In a 16-song set, they covered a diverse group of songwriters (all of whom were credited together at the show’s conclusion), ranging from Broadway standards, to Sondheim, and to contemporary songwriters like Amanda McBroom and Michele Brourman.  McBroom’s songs with and without Brourman comprised a quarter of the show.

Austin Pendleton is one of those names you might not know, but you’ve probably seen him as a character actor on stage and in movies like “My Cousin Vinny” and dozens of television shows, heard his speaking voice in Disney features like “Finding Nemo”, or you might have had the great fortune to see him originate the role of Motel the Tailor in “Fiddler on the Roof.”  At 81, he’s seen it all, and here, we see it through his eyes.

Barbara Bleier has worn many hats.  A classically trained pianist who played Carnegie Hall at age four, she’s also a singer, actor, writer and a doctor of clinical psychology.  Together, Pendleton and Bleier bring a wealth of life and theater experience in the form of stories and songs.

Barbara sang first, with a Sondheim song cut from Assassins, “Flag Song.”  It was an appropriate lead-in to Paul Simon’s “America,” sung solo by Pendleton, though singing a Simon and Garfunkel song without harmony felt like a lost opportunity.  Barbara stated, “We originally planned this as a political show, but then we realized everything is political, and decided to sing about everything.  You can all make your own connections.”

We associate “If I Loved You” (Richard Rodgers/Oscar Hammerstein II) from Carousel with the tragic love story of a doomed young couple.  It’s a rangy song that’s a challenge for any singer.  Here, sung by an elderly couple who’ve far outlived the poor decisions of Carousel’s flawed, impoverished characters, Hammerstein’s lyrics take on an entirely different meaning, and their nearly frail singing of the operatic show tune creates a poignancy and urgency that was quite touching.

The obscure vaudeville song from “Royal Wedding,” “How Could You Believe Me When I Told You That I Loved You” (Alan Jay Lerner/Burton Lane), showed off an adorable repartee between the couple, with Pendleton taking on the curmudgeonly role of a man who’s “been a liar all my life.”  One could imagine Jimmy Durante singing this delightful tune.

The Pangea audience found “There” (Richard Maltby/David Shire) to be hysterically funny, as their musical characters struggled with memory and they finished each other’s lines.  The song that could easily have been an Erma Bombeck essay, “Am I Old Enough,” by Tom Toce and Douglas Cohen, felt like the essence of the entire show.  Barbara asks, “So, after the divorce… am I old enough for a younger man?” She wondered, “What would my mother think?  What would HIS mother think?  Am I ready to dine with a guy who might possibly ask, ‘Jack and Jacqueline Who?’” The crowd ate it up.

Am I old enough?

And my body’s good, so I know I could.

Ah, but younger men are oh, so young.

Retired radio personality Jonathan Schwartz, a man of many baseball analogies, said of Frank Sinatra in his later years, when the vocal instrument was worn and weathered, “He no longer has his fastball, or even his curveball.  But he has developed a knuckleball.  You can win games with a knuckleball.”  Pendleton, too, is down to his knuckleball.  His voice is somewhat cracky, and he stumbled over a lyric here and there.  But with his actor’s ability to emote a lyric and reach the heart, his knuckleball hit its mark just enough to win the game.  Bleier, a lovely woman of a certain age, has another pitch or two besides the knuckleball.  Her pleasant voice was a bit of a tonic to Pendleton’s gin when they met for a duet several times in the show.

Their accompanist and musical director, Paul Greenwood, wisely used spare arrangements that allowed the duo to focus on the story, the humor, and the emotional resonance of the songs.

Directed by Barbara Maier Gustern, who was also a guest singer on “Look to The Rainbow” (Burton Lane/Yip Harburg).