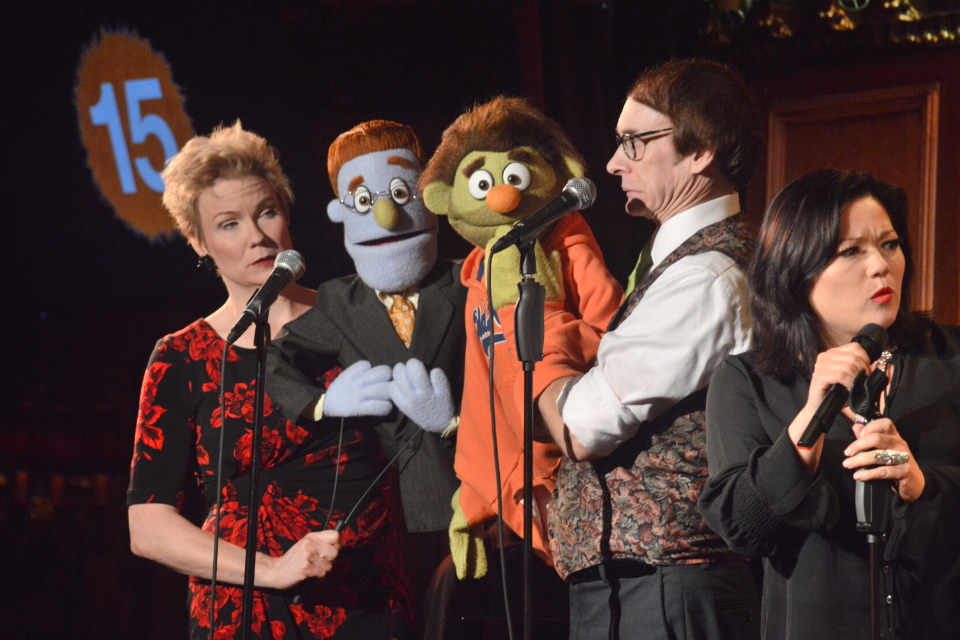 Legions of children have grown up with Sesame Street and it’s human and puppet resident’s teaching letters and numbers.  15 years ago composers Robert Lopez, Jeff Marx and book writer Jeff Whitty crafted a brilliant satirical touch stone Avenue Q which thumbed it’s furry thumb at Sesame Street, Broadway, Gary Coleman, and expectations of life after college.  The show, for me, remains one of the coolest, funniest, and smartest musicals but I’m smack dab in the Sesame Street initial production demographic.

Feinstein’s/54 Below joined in the celebration of Avenue Q’s 15 year legacy with a fun concert featuring a litany of folks associated with the original and many productions and the composers. It was a fabulous evening that captured everything magical about Avenue Q – the originality, feistiness, satire and brilliance.

The evening opened with original company members John Tartaglia, Stephanie D’Abruzzo, Rick Lyon, Jen Barnhart, Jordan Gelber singing The Avenue Q theme, “What Do You Do with a B.A. in English” and “It Sucks To Be Me.”  They were joined by Erin Quill and Carmen Ruby Floyd.  The original cast retains much of their zest and youth. They sang with panache. Composer Jeff Marx did a cut number at the piano with Tartaglia about spending time on the toilet.  D’Abruzzo sang another cut number with Lucy D Slut called “Two Lips.”  Robert Lopez sang about various professions (lawyers, radiologists) while referencing a lawyer who advised on the songs similarity to Sesame Street’s “These Are The People in Your Neighborhood. ” Both numbers, were hysterical, and illustrated the fun it must have been to spoof a childhood institution.

D’Abruzzo’s rendition of “There’s a Fine Fine Line” always delivers tenderness and ferocity on the perils of falling in love.  Married performers Rob McClure and Maggie Lakis were cute on “A Mixtape.”  “Schadenfreude” in the hands of Carmen Ruby Floyd and Rick Lyon was a hysterical reminder of the bitches of karma. “I Wish I Could Go Back to College” was poignantly rendered by Barrett Foa, Anika Larsen and Rick Lyon. The evening shows how amazing the cast of Avenue Q was throughout the 15 year run with true talents able to handle the show’s edge and heart with vitality and brio. Essential to the show is the apt, cunning casting by Cindy Tolan and Adam Caldwell.  There’s a shiny sagacity to finding people with deft puppetry skills, singing, acting and belief of stepping into the universe of co-existing with Gary Coleman, humans, and puppets while delivering intelligent performances.  This point was hammered home with the whole current cast (Grace Choi, Ben Durocher, Jason Jacoby, Nick Kohn, Maggie Lakis, Dana Steingold, and Danielle K. Thomas) singing along with the veterans in the closing number “Only For Now.” Avenue Q has lasted through three presidents and Coleman’s death with various lyric changes but, more importantly, it still delivers a fresh, feisty, appealing take on life after college, finding purpose, friendship, romance, and growing up. The concert was a welcome summer respite and celebration of the vitality of the production.  And the performers were absolutely having as much fun as the audience.

Join your new furry friends and their human compatriots on Avenue Q which is currently playing at New World Stages.  Tickets and more information at avenueq.com