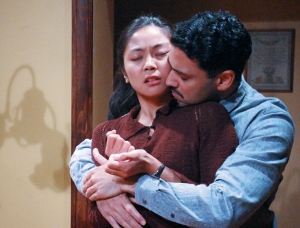 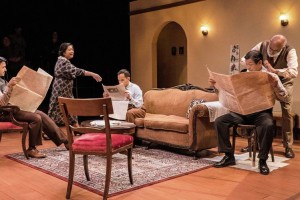 The National Asian American Theatre Company kicks off its 25th Season in residency at The Public Theater with the Clifford Odets’ drama Awake and Sing. 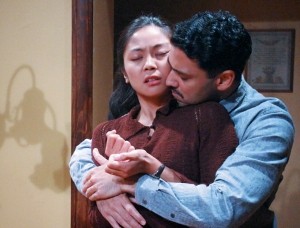 Awake and Sing is a play about the Bergers, a lower middle class, three-generation Jewish family living in a Bronx apartment during the Depression. The language in the play is written with a New York City Jewish cadence, but the casting of Asian American actors in Awake and Sing is less unconventional than would appear—these actors have taken on Odets’ idiosyncratic language and New York accent with great finesse. In this production, there are several ethnicities present in the cast, though predominantly Asian American; and what is abundantly apparent is the universality of the theme, the uniform brilliance of the performances, and the clarity and soulfulness of the direction by Stephen Brown-Fried.

The play opens at dinner with all present clearly dissatisfied. Ralph (Jon Norman Schneider) the son of Bessie (Mia Katigbak), his sister Hennie (Teresa Avia Lim), his father Myron (Henry Yuk) and grandfather Jacob (Alok Tewari) are all involved in what seems to be a familiar dance of complaining and controversy. We witness a family situation that has a pervading sense of diminished opportunity and frustrated ambition. Ralph has a girlfriend he wants to save; Hennie has a love that is stunted; Bessie is the matriarch who feels that control over every person and situation will net her some sort of peace; Jacob, her father, feels Communism will save the plight of the poor American worker in his struggle with the rich; and Bessie’s husband Myron lives in a world of his own passive making.

After Bessie, Myron and Hennie leave for the movies, Moe Axelrod (Sanjit De Silva) a young friend of the family enters looking for company and fishing for information about Hennie from Jacob. Hennie et al. come back unexpectedly because Hennie has gotten sick. We find out her problem and Bessie’s solution, and thereby are catapulted into the real meat of the play. Bessie’s brother Uncle Morty (James Saito), as the successful garmento, adds a stark, wealthy contrast to the struggling family and Hennie’s husband, Sam Feinschriber (David Shih), brings a doggedness that seems to haunt the room every time he appears. The resolution of this scenario is shocking and tragic. By the end of the play, and this powerful production, the audience en masse expelled a giant cheer. As the critic Alfred Kazin wrote after seeing the original production, “Art and truth and hope could yet come together…I had never seen actors on the stage and an audience in the theater come together with such a happy shock.”

Clifford Odets’ Awake and Sing is as timely today as it ever was and the riveting production this company serves up proves the relevance chilling. This long-respected NAATCO gives Awake and Sing not only acting excellence, but set design, costume design, direction and a shared commitment that is palpable and exciting. It fulfills the ghostly quote Odets wrote on the flyleaf of the play: Awake and sing, ye that dwell in dust: Isaiah—26:19

(The building porter Schlosser is played by Mel Duane Gionson)

The limited engagement in the Public’s Shiva Theater (425 Lafayette Street) will run through Sunday August 2nd. 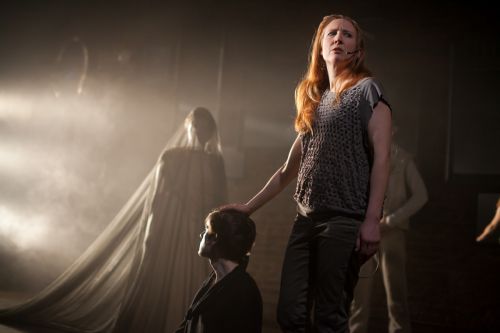