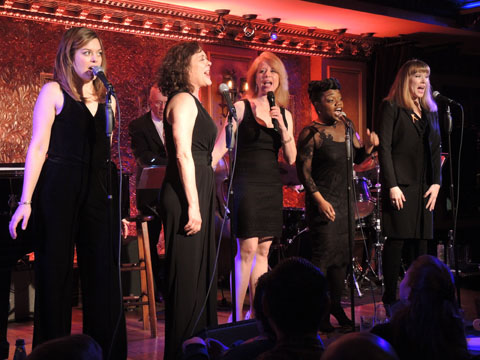 Raise that banner high! Former head of 92Y’s Lyrics and Lyricists (9 successful years), Deborah Grace Winer has begun the next chapter of her professional life by creating, writing and hosting the first in a brand new series of shows at 54Below celebrating The American Songbook.*

January 17th’s tribute to women writers couldn’t be more timely. The distaff side of humanity is taking to the streets, forming associations, standing up for equality in pay, recognition, and control over our own bodies. Many of those acknowledged this evening remain in the shadows to all but those in the business. Songs with which we’re familiar are often associated with male collaborators. “Women writers of the American Songbook are bold pioneers-in-heels who crashed the boys’ club, writing some of our most famous songs and shows. At a time in the 21st century when we still seem to be talking about things like “What is a woman’s place”—which most of us thought had disappeared a long time ago—it’s especially meaningful to look to women who accomplished so much, as Ginger Rogers would say, “Backwards and in high heels.”  Every contemporary woman songwriter stands on the shoulders of this accomplished group.” Deborah Grace Winer Kenita Miller exhibits an enormous, muscular voice and impressive control. Her rhythmic, mid tempo “God Bless the Child” (Billie Holiday/Arthur Herzog Jr.) shows the kind of mastery that can go bright and shady within one personalized musical phrase. ‘Gravitas without weight. Later, however, she vastly misses with Mary Rodgers/ Marshall Barer’s “Shy” (Once Upon a Mattress). Strict focus on musicality eschews every bit of the song’s comic characterization. Margo Seibert’s wry “The Boy From…”(Mary Rodgers/Stephen Sondheim- the revue The Mad Show) effectively creates the obtuse, Valley-Girl lyrics describe. Interpretation of Betty Comden/Adolph Green/Jule Styne’s “The Party’s Over” from Bells Are Ringing), alas, lacks pathos despite a lovely arrangement with sashaying bass and brushes. Siebert has the chops, but is much less in character for cabaret than she is when on a theater stage.

“You’d think,” Winer tells us, “that Mary Rodgers would’ve had a free ride as the daughter of Richard Rodgers, but she often talked about the stigma of being a woman writer on Broadway in the 1950s- It’s not what women do!” As performed by Emily Skinner, Dorothy Fields/Arthur Schwartz’s “He Had Refinement” (A Tree Grows in Brooklyn) is virtually a scene in one. Skinner, in full New Yawk accent, projects innocence and wistful recollection pivotal to the tune. Phrasing is on target. She’s adorable. The performer’s “It Amazes Me” (Carolyn Leigh/Cy Coleman), perched on a stool, accompanied only by piano, is enhanced by unfussy rendering. With just a bit of quivering vibrato tail, we hear low key gratitude and surprise. Actress/singer Karen Ziemba offers “If You Hadn’t But You Did” (Betty Comden/Adolph Green/Jule Styne –the revue Two On The Aisle) with a blues verse that erupts into palpable, staccato frustration. “He’s made my life a mess/I’ve got to do this, I guess…” she sings firing a finger revolver. Long, complex, perfectly enunciated lyric lines vehemently flare. This is one splendidly pissed off dame. Earlier, Ziemba performs an effervescent, mambo interpretation of “When in Rome” (Carolyn Leigh/ Cy Coleman), replete with a few infectious dance steps.

An ebullient “Who’s Afraid of The Big Bad Wolf” (Ann Ronell/Frank Churchill) begins with uber-cool Jay Leonhart, who sings in the iconoclastic, low key style of Fred Astaire. Winer points out that, written for a Disney Cartoon, the song became a rallying cry during the Great Depression. Playing pigs, two women cower as #3 stands up to the enemy. Direction is swell. The number is fun rather than kitchy.

“Back to Before” (Lynn Ahrens/Stephen Flaherty – Ragtime) arrives a veritable anthem. Vocalists might easily be on a platform among thousands of their ‘sisters.’ “Back in the days/When we spoke in civilized voices-/Women in white/And sturdy young men at the oar./Back in the days/When I let you make all my choices./We can never go back to before…”

“The world has become a very upsetting place lately. I tuned into the reality talent show The Voice just in time to hear a singer look into the camera and say, I’m going to sing “The Way You Look Tonight” by Frank Sinatra. Not only were the song’s authors Dorothy Fields and Jerome Kern, but it was written for Fred Astaire!” Outraged, Winer spent considerable time posting the correction. Bless her.

“ So what’s a woman’s place, anyway? Did you ever think suffragettes would be in again?” Deborah Grace Winer

The entertaining evening contains just enough well spoken information and anecdote to buoyantly bridge. It ends with a rousing “The Best is Yet to Come” (Carolyn Leigh/Cy Coleman) One can only hope.

NEXT: You Took Advantage of Me: Rodgers and Hart on Love- March 27