Baldwin and Buckley at Cambridge 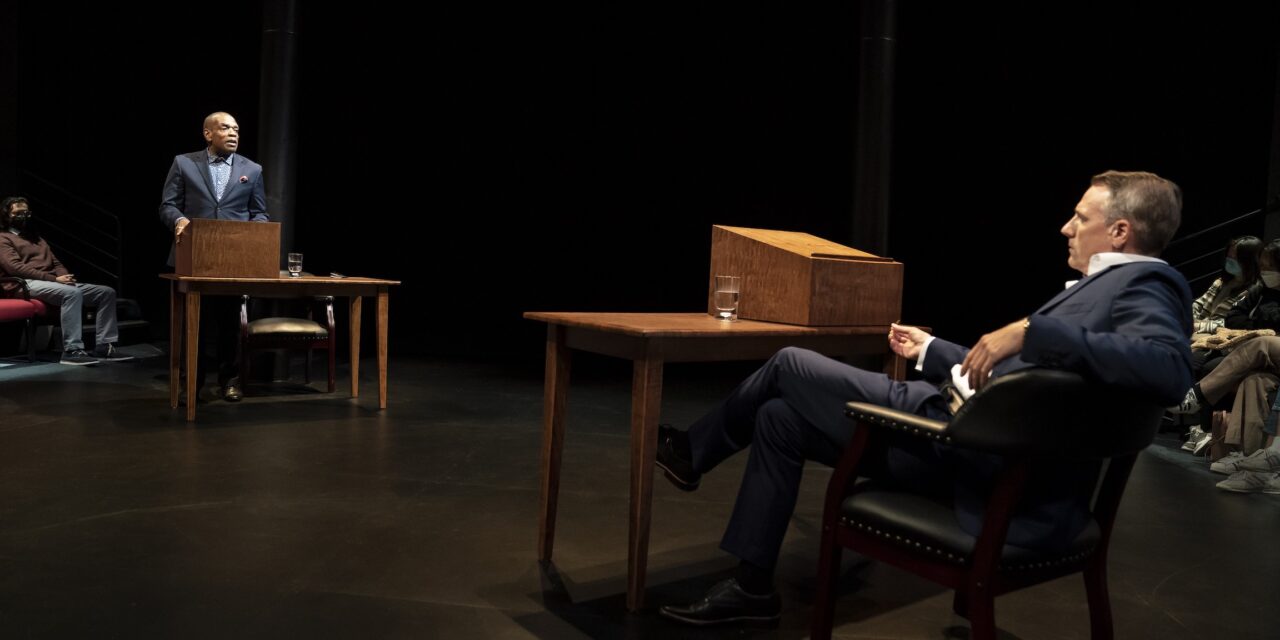 The year is 1965.  The place is Cambridge University.  The event is the hottest debate of the era.  And You Are There.

That’s the premise of the Elevator Repair Service’s latest theatrical marvel, Baldwin and Buckley at Cambridge, now playing at the Public Theater.  This innovative, audacious company, under John Collins’s fearless leadership, is known for its selection of a wild, unpredictable variety of texts and bringing them to theatrical life.  In the past, they’ve presented everything from adaptations of novels (The Sun Also Rises, The Sound and the Fury), to a verbatim production of a Supreme Court transcript (Arguendo).  Indeed, their most celebrated theatrical stunt is a stunning seven hour “reading” of F. Scott Fitzgerald’s The Great Gatsby – every word of it – which they playfully called “Gatz” and performed with members of the company.

And now they’ve pulled another rabbit out of their magician’s hat.  It’s called Baldwin and Buckley at Cambridge – an hour-long verbatim reenactment of that famous debate in 1965 between the celebrated Black writer James Baldwin and William F. Buckley, Jr., a well-known conservative writer and political commentator.  The title of their debate:  “The American Dream is at the expense of the American Negro” – a topic that is even more urgent and explosive today than it was sixty years ago when the debate took place.

On a bare stage, with only two chairs, tables, and lecterns, four actors recreate the hourlong event, word for word.  Beginning with an introduction by two Cambridge students, Mr. Heycock (played by Matthew Russell in the performance I saw) and Mr. Burford (Christopher-Rashee Stevenson), the debate begins with James Baldwin (played by Greig Sargeant, a Baldwin-look-alike).  He gives an impassioned, intense, riveting speech, documenting the pain of growing up Black in America, being taught he was a savage from Africa, and passing on the feeling of worthlessness to the next generation.  “We have been made to accept our history,” Baldwin exclaims, pointing out that the American economy was built on Black labor.  “I am one of the people who built this country!” he cries.  Buckley’s rebuttal (by Ben Jalosa Williams) comes in a smooth, articulate, deceptive delivery that is more style than substance.  (Both actors play their roles with consummate skill.  Sargeant’s performance is powerful and painful – so mesmerizing that you can’t look away.  Williams’s calm, controlled response is equally powerful in its confidence and subtle condescension, as if he feels he had nothing to lose.) (The actual vote at the debate’s end, by the way, was 544 to 164.)

The power of watching this debate (as opposed to viewing it on YouTube, where it is also available in its entirety) is that we are there, live, in the audience.  The house lights are on throughout the debate, and we soon come to realize that we are an essential part of the event.  We are bearing witness to the agonizing legacy of slavery and racism that plague us today with a new awareness and intensity.  Now what are we going to do about it?  the production is asking us.

That question is actually addressed in an unexpected coda to the evening.  After Buckley exits, Baldwin is left alone on the stage, and a woman enters and sits down on a couch that has been provided.  She is none other than Lorraine Hansberry (played by Daphne Gaines), the celebrated Black playwright, who was actually a close friend of Baldwin.   They reflect on the debate together:  “What makes you think I want to be accepted into this?”  Baldwin asks, referring to the dominant white American society.  But then he says: “We need to sit down and rebuild this house.”  “Yes, quickly,” replies Hansberry.  Then comes another surprise scene (well of course, after all, it’s an ERS production).  The actors are now playing themselves – Greig Sargeant and Daphne Gaines – recalling where they were when first met.  They were cast in ERS’s adaptation of The Sound and the Fury – brought into the production because it was being staged without any Black actors.  It’s ERS’s mea culpa, and a provocative revelation that lingers beyond the performance’s end.

Meanwhile, there’s yet another metatheatrical dimension to this production: Lorraine Hansberry’s A Raisin in the Sun is actually playing at the Public right now, in the same building where Baldwin and Buckley at Cambridge is being performed.  What about a new play featuring an expanded conversation between Baldwin and Hansberry?  Now there’s an idea for a new ERS production….

Baldwin and Buckley at Cambridge, conceived by Greig Sargeant with Elevator Repair Service, directed by John Collins.  Now playing at the Public Theater, through October 23.