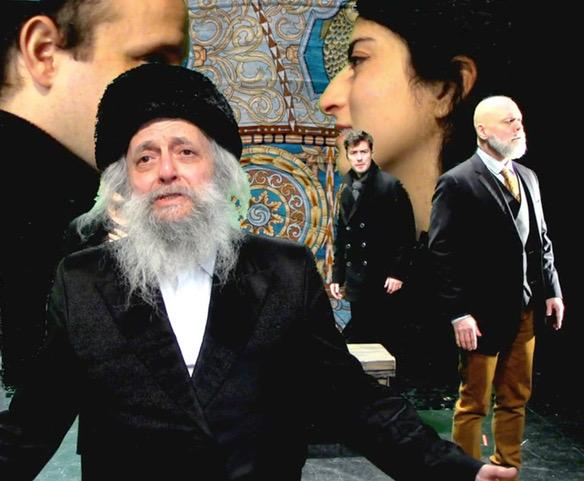 Just when everyone thought Yiddish theater had taken its dying breath, the fabulous invalid shook off her shmattas and celebrated Hanukah of the year 5781 by dancing at two different adaptations of S. Ansky’s 1920 mystical Yiddish drama, The Dybbuk, a jewel in the crown of Yiddish literature. Ansky built his plot around the folk beliefs and bubba maynses – Old Wives Tales – he gleaned from his years of ethnic research. Each production offers a unique approach to a loving ghost story – Boy meets Girl, Ghost loses Girl, Ghost gets Girl – while depicting Jewish devotion to the Rule of Law.

The Dybbuk takes place in 1892 in Brinitz, a town in southwest Imperial Russia where Jews were allowed to settle. A Dybbuk is the lost, dispossessed soul of a sinner who died young and wanders the earth searching for a body to invade so that its voice may be heard and its sins expiated.

The first Dybbuk I encountered was the New Yiddish Rep’s Dybbuk which oddly enough was performed in English, but sprinkled with Yiddish tunes with accompanying English titles spelled out in Golden Hebrew Lettering.  New Yiddish Rep’s co-founder David Mandelbaum who created the adaptation and translation, also co-starred in the play.

A few days later, a second Dybbuk lit up my iMac screen. Produced by the Congress for Jewish Culture, and performed in Yiddish. Allen Lewis Rickman created a soulful adaptation and Shane Baker composed the poetic, flowing and very clear English titles. Shane Baker, a nice midwestern Presbyterian laddie, co-founded the Congress for Jewish Culture after becoming entranced enough by Catskill comics to learn Yiddish; he now sounds like he was raised on Hester Street in the 1920’s.

In both productions, the curtain rises on Sender and Nissan, best friends, both married, both studying Torah in Brinitz. Sender’s wife is pregnant. The friends agree if she has a daughter and Nissan’s wife gives birth to a son, the children will marry!

Hold on to your Mazel Tovs. The wives do, but the children don’t. And therein lies the tsouris.

Nissan’s wife gives birth to a son, Chonon, but Nissan dies young without ever informing Sender that the mate that fate had Leah created for exists.

Chonon, an outstanding scholar who’d memorized 500 pages of Talmud, moves to Brinitz to continue his Torah studies. His scholarly reputation gets him invited to eat Shabbat dinners in Sender’s home. Chonon becomes enamored with Leah and she is drawn to him. Her father, who’s disremembered the pact he made with Nissan, is busy assessing the character of suitors for her hand, making such unreasonable pre-nuptial demands that every match collapses.

Chonon, a poor student without two rubles to rub together, knows the likelihood of Leah becoming his bride are slim. To increase his odds, he fasts and draws on the mystical, esoteric teachings and spells found in the dark side of Kabbalah, which attempt to explain and narrow the void between mortals and the unchanging, eternal God. Chonon’s plan seems to be working until Sender arrives and announces that he’s found a bridegroom for his daughter. Chonon collapses. He cannot be awakened. Alas, he is dead.

On the morning of her wedding, Leah dreams she’s surrounded by spirits including Chonon’s, who asks to attend her wedding. Later that day when Leah visits the cemetery to ask the spirits of her grandparents and her mother to accompany Sender in escorting her to the marriage canopy, she disregards her nurse’s warning about dybbuks, and invites Chonon to the ceremony as well. When the bridegroom unveils Leah’s face, a booming voice from her lips calls the bridegroom a murderer, declares Leah is his destined bride and refuses to leave her body!

Rabbi Azriel, a renowned but reluctant Hassidic Tzadik, is called. He agrees to do his best to make the Dybbuk leave. When the Dybbuk refuses Rabbi Azriel’s demands, Azriel recognizes the voice. The dybbuk is Chonon!

Excommunication is the only answer. Two more rabbis are sent for to complete the required tribunal. One of them spoke with Nissan, Chonon’s father, in a dream. He demanded Sender be prosecuted for his son’s death. Jewish law decrees Justice comes first. Nissan’s accusation of Sender must be resolved before the Dybbuk can be expelled.

Nissan’s spirit is summoned, the accused is sent for and the trial begins. The tribunal rules that Sender be fined and punished. He is to bestow half of his wealth on the poor and to say Kaddish – the prayer for the dead – every year for Nissan and Chonon. Nissan is told that the contract he entered into with Sender is null and void because Jewish law doesn’t allow a being not yet created to be entered into a legal agreement. Sender accedes to the court’s verdict, but Nissan’s spirit is silent!

On to the excommunication. Rabbi Azriel orders the shofer be blown three times and excommunicates Chonon in order to exorcise the Dybbuk. Chonon leaves Leah’s body but Leah will not relinquish her pre-ordained mate. Their souls, mourning their unborn children, blend into each other and are united eternally in death.

Both The New Yiddish Rep and The Congress for Jewish Culture productions of The Dybbuk were streamed on the internet last week. Both were exceedingly well produced and poignantly performed. Both Rabbi Azriel’s were stupendous. The New Jewish Rep’s David Mandelbaum’s English-speaking Azriel was traditionally attired and very forceful. The Congress for Jewish Culture’s Mendy Cahan’s Yiddish-speaking Azriel was more contemporary but equally intense. Both were captivating and undeniable enough to deserve Twin-Tony awards. In addition, the character of Rabbi Azriel should be the future footprint for all who aspire to become an associate justice of any country’s Supreme Court.

How do the New Jewish Rep and the Congress for Jewish Culture continue to not only exist but thrive artistically despite being under-funded? Unlimited artistic flair disguises the dearth of funding both companies are plagued by.

New Yiddish Rep’s Lucie Allouche was a touching Leah. The entire cast was sensitively directed by Jesse Freedman. What allowed it to soar into a heavenly sphere was the brilliance of Cinematographer and New Media Artist Tatiana Stolpovskaya, a Russian émigré, who deserves at least 15 cheers for unshackling Middle Eastern and Eastern-European digital designs and allowing them to swirl, dance and meld into the bare set behind the actors. Her expertise in manipulating actors and images as if they were paper dolls deserves a rip-roaring Russian cheer. So, gip-gip ura, Tatiana for constructing the digital equivalent of e=mc[2].

The Congress of Jewish Culture’s Dybbuk was adapted, directed and narrated by Allen Lewis Rickman, equally gifted performing in Yiddish or English as in The Coen Brothers film, A Serious Man. A commendation also to Rickman’s child bride, Yelena Shmulenson (Rhea Boyle in Orange is the New Black) for her exceptional performance as Leah which convinced me she was still in her teens.

Shane Baker’s English titles were not only fluid, flowing and poetic, they were easy to read in their big, bold, clear, modern font. Clarinetist Michael Winograd of the Yiddish Art Trio arranged and performed the klezmer-based musical score. Uri Schreter deserves acclaim for the incredible skill with which he, a Harvard graduate musicologist, who stumbled into a Yivo course taught by Shane Baker, perfectly coordinated performances by eight Yiddish-speaking actors in five different locations – Berlin, Buenos Aires, New York, Tel Aviv and Toronto – so they appeared on the same screen at the same time. Their passionate voices and significant facial expressions were so riveting that I didn’t miss the background sets one bit.

If you missed either not to worry. These Dybbuks will live on, streamed forever at www.newyiddishrep.org and www.congressforjewishculture.org. Both websites will supply further information. Photos: Uri Schreter 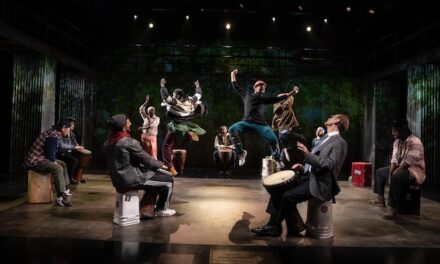 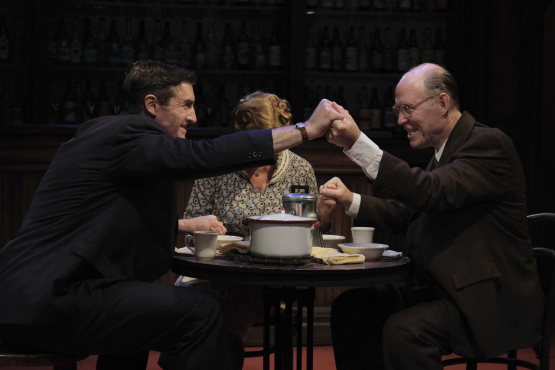 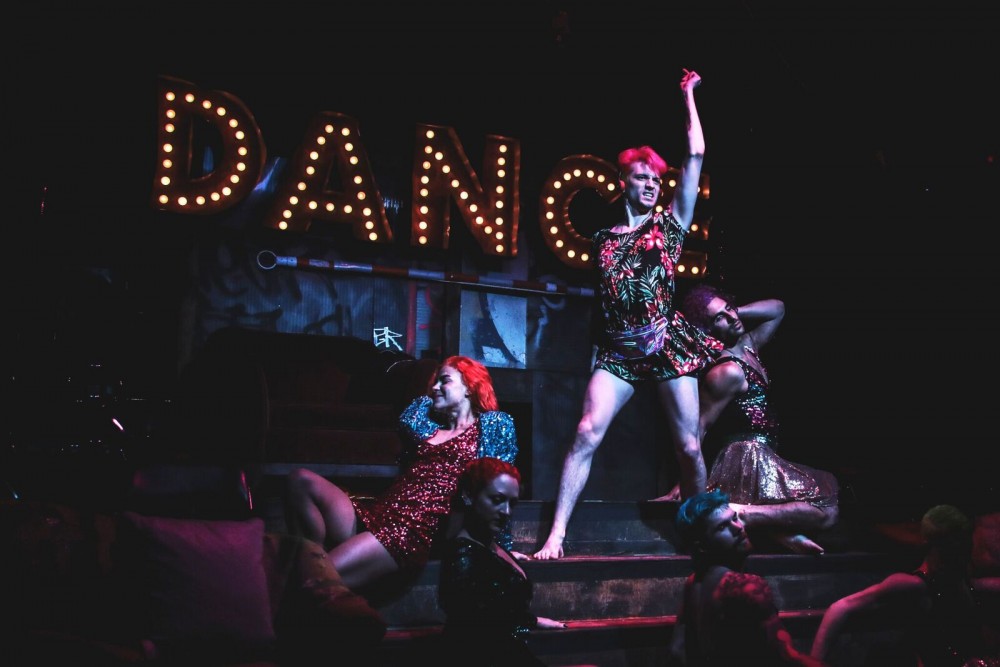