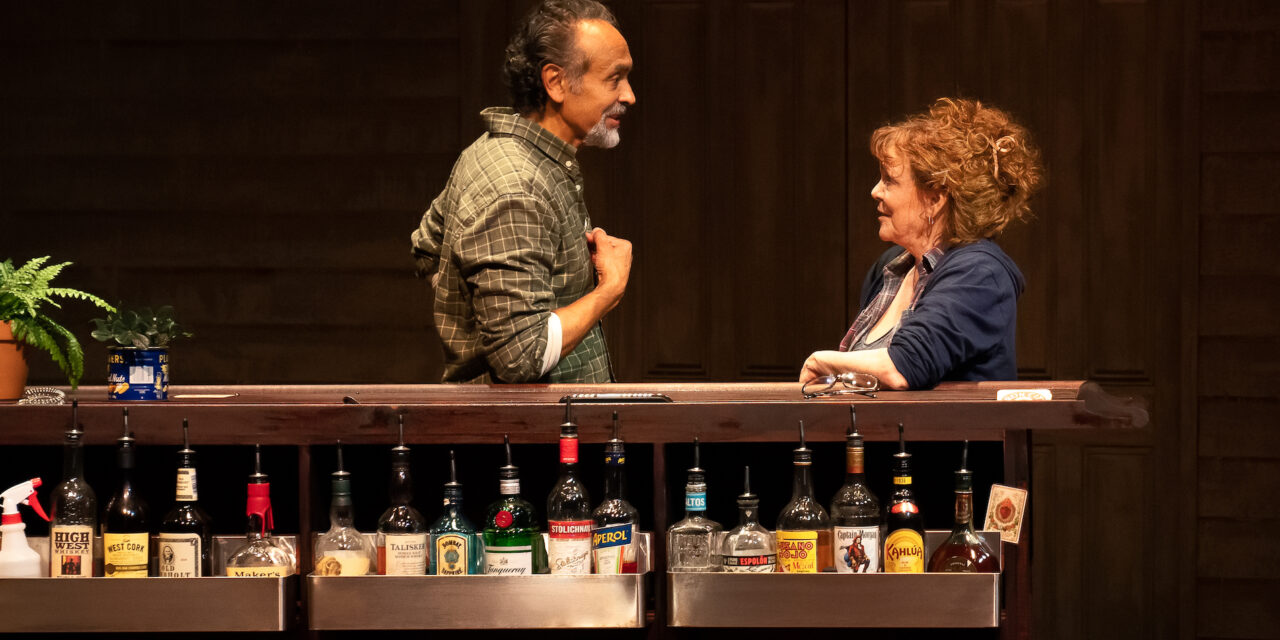 Few contemporary playwrights make theatre magic like Sarah Ruhl.   Wonderfully imaginative, endlessly curiously, breathtakingly original, irrepressibly playful, she combines a passionate feminism with a deeply felt humanism.  She digs deeply into history and the classics for inspiration, and her choice of female protagonists  –  ranging from a modern-day widow (Eurydice) to the curious wife of an inventive gynecologist (In the Next Room)– are both surprising and consistently fascinating.

With her newest play, Becky Nurse of Salem, she has struck theatrical gold.

Enraged by the treatment of Hillary Clinton in the 2016 election (“lock her up”),  she found a historical connection in the demonization of women during the Salem Witch Trials in 1672.  In that terrible chapter of history, more than 200 people were accused of witchcraft in colonial Massachusetts, thirty were found guilty, and nineteen people (including fourteen women) were executed by hanging.  Unlike Arthur Miller, however, who chose a male protagonist (John Proctor)  to tell the story in his play The Crucible, Ruhl has chosen to focus on a woman in hers – namely, Rebecca Nurse (a true historical figure and a minor character in Miller’s play).  A pious seventy-one-year-old woman, a well-respected Salem resident, Nurse was accused of witchcraft, tried, and hung from a tree.

While Miller set his play in 1672, Ruhl places hers in modern-day Salem.  Her protagonist, Becky Nurse (played by the amazing Deirdre O’Connell), great-great-great-etc. granddaughter of Rebecca Nurse, is a working class Everywoman, trying to hold down a job, raise a rebellious granddaughter, and deal with the loss of her own daughter from a drug overdose.  In the opening scene, Becky is working as a guide in – of all places – the Salem Museum of Witchcraft, where she gives tours to student groups.  She’s fired from that job, however, by her unsympathetic boss Shelby (an imperious Tina Benko) for inappropriate language, as well as for insisting on telling her groups that Gallows Hill, the site of Rebecca Nurse’s hanging, is now  the location of a Dunkin’ Donuts rather than a Walgreen’s (which Shelby asserts is historically inaccurate).  Enraged by this injustice, Becky storms off the stage, dragging the life-sized dummy of her ancestor with her (one of the creepily hilarious features of Riccardo Hernández’s clever set).

This early dramatic scene sets the tone of the play, as Becky embarks on a desperate course.   Now unemployed, she seeks work at a local Marriott, where she finds that a young man named Stan (Julian Sanchez) already has the job.  In turn, Stan introduces her to a local witch (Candy Buckley), who offers potions, spells, and amulets to help Becky solve her multiple life problems.  There’s the management of her independent-minded  granddaughter (Alicia Crowder), who has formed a romantic relationship with Stan (whom Becky now refers to as Satan).  There’s also Becky’s friendship with Bob, a local bartender (an endearing Bernard White), a former high school sweetheart (now married) for whom she still has feelings.  Then there’s Becky’s own addiction to opioids, which she is forced to confront.

In the marvelous actress Deirdre O’Connell, Sarah Ruhl has found a wonderful channeler of her quirky, absurdist, heartfelt humor.  A treasure of the New York theatre (and recent Tony winner). O’Connell’s Becky is a spirited mix of feistiness and vulnerability.  There’s a priceless moment where Becky and Bob break out into a dance.  “Laughing wild amid severest woe” is Beckett’s line from Happy Days that comes to mind in that moment.  Such is the wonderful mix of humanity and heart that Ruhl’s plays offer.

Even with all the antics (and there are plenty), Ruhl is intent on telling a serious story of martyred and forgotten women, past and present, as they struggle for survival and agency.  Though the story loses some momentum in act two, it ultimately regains it at the end by offering the notion of salvation through love, perserverance and connection.

Overall, it’s a charming and engaging production that addresses the serious issues of women in society – directed expertly by Rebecca Taichman.  Donald Trump has given Sarah Ruhl a gift – the opportunity to turn the notion of “a witch hunt” (his odious catch-all phrase) away from the women and back onto the society that brands them.  This persecution must stop, and it will – that is, if Sarah Ruhl has anything to say about it.