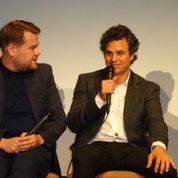 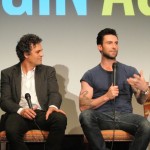 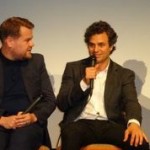 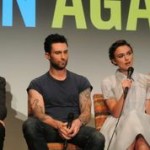 A special sneak peek press conference was held for the film “Begin Again” featuring a panel of its stars: Mark Ruffalo, Keira Knightley, James Corden, Adam Levine and more as well as the film showing. Theater Pizzazz’ Miriam Spritzer was on hand to capture it all.

Begin Again is a story of a friendship established through the love of music. Mark Ruffalo plays Dan, an out of luck record label executive who stumbles upon a young raw musician named Gretta, played by Keira Knightley. Both characters are facing big challenges in their personal life as well as professional. In addition to having trouble keeping his job, Dan is also going through a divorce and cannot connect with his daughter. Meanwhile, Gretta finds herself lost after breaking up with long time boyfriend and partner, Dave (Adam Levine), whose new-found fame has changed their relationship. 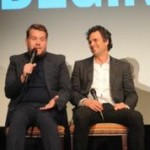 Despite their initial differences, Dan and Gretta find a way to collaborate in music by producing her album independently. With the help of Gretta’s good friend from home, Steve (James Corden), they start to put together a beautiful and original album using New York City as a background sound. By doing what they loved, this partnership ends up creating great and positive transformations in both of their lives.

John Carney (Writer and director) comments that the idea behind the story came from when he was young and part of a band in Ireland, and would be seen by a lot of record label executives who were looking for the next U2. He had a curiosity of about their lives and what happened to these people and that inspired the story. With songs written by Gregg Alexander, the movie follows Carney’s view and style that had captivated huge audiences around the world by Once. Similar to the sensation to the previous film, in Begin Again there is a constant tension and longing between the two characters, but in this case it’s friendly and one of admiration. Its language is very close to reality, giving a sense of an independent movie with hollywood stars.

That result is partially due to the cast composed by a mix of veterans of various areas of the entertainment industry. By having singers act and actors sing, these seasoned performers found themselves in a new place, making the acting quite impressive. Mark Ruffalo shows great talent as Dan, his character’s transformation throughout the film is very impressive and honest. Keira Knightley, whose singing abilities are being shown for the first time in this film, has a beautiful and sweet voice that works really well for its music style. James Corden has a charisma beyond compare, his character is a central piece in the story as Gretta’s support system and what a great casting choice for a comic relief. The film also marks Adam Levine’s debut on the big screen. And although portraying a rock star may not be a big challenge for him, he played the part of Dave quite convincingly and very naturally.