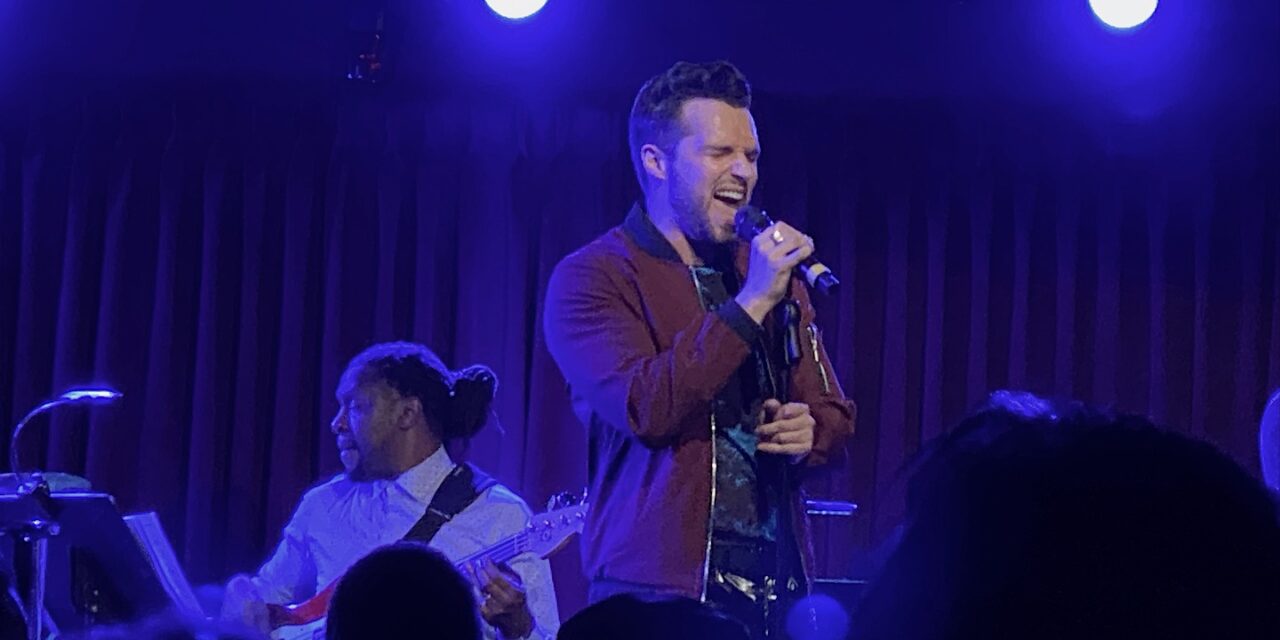 Actor/singer/dancer Ben Bogen took to the stage at The Green Room 42 in a sold out show that rocked the room. Backed by a wonderful group of musicians, singer/dancers and three guest artists, he shared his personal coming out story as well as his ascension on the ladder of show business one tiny rung at a time.

Musical biographies of this sort, though always done with the best of intentions, can sometimes fall into a trap of over-achieving or staying too insular, things that can seriously mar an act aiming for entertainment. But Bogen has a strong sense of structure (he’s a writer as well) and his script was tight in the best ways and loose when it needed to be. Ripping his brand new leather pants during the opening number was NOT in the script, though his recovery was seamless (sorry, couldn’t resist).

A smooth talker, comfortable in front of a crowd, and with a grace and agility that he utilized to full advantage, Bogen made it a pleasure to see a cabaret show performed on a stage the size of a postage stamp that still allowed for dancing. And can this guy move! It’s rare to be so thoroughly engaged in such an intimate room by the sensuous and often-times self-mocking movements that Bogen and his two backup dancer/singers (Morgan Harrison and Ross Thompson) incorporated. As the yin and yang of a sexy male/female duo, Harrison and Thompson were simply terrific and lent able support throughout the evening.

Opening with Cher (“Turn Back Time”), effortlessly sliding into Sara Bareilles (“King of Anything”), later onto Taylor Swift (“You Belong with Me”) and inevitably title tuner Katy Perry, Bogen proved he can belt things written for women with the best of them. He mostly chose songs that reflected a variety of his “teenage dreams,” all of which stemmed from a burning passion to be a stage actor in musicals, ultimately achieving that dream when he joined the company of Frozen on Broadway. Bogen chose to steer away from show tunes, instead going with songs he sang along to in his bedroom on his path to discovering who he was as a young gay man. Not shying away from telling the stories of his boyhood, teenage and more mature crushes, Bogen took the necessary steps to ensure that things stayed lively, jovial and not too serious (no sense bringing down the crowd). His emotions were pure and the audience was with him all the way.

His roommate, T. J. Newton (recently of the Spamilton national tour), Michelle Beth Herman (recently of the Les Miserables national tour), and Taylor Iman Jones (soon-to-be in the new Broadway bound musical version of Devil Wears Prada), all lent their considerable talents and great voices to a spirit of comradery that was irresistible. The evening’s musical director, Drew Wutke was a pleasure on piano (his wry commentaries always welcome) and Hajime Yoshida (guitar), Jonathan Michelle (bass), Nicole Patrick (drums) were each given moments to shine.

At this time of year, it’s always a pleasure when good cheer is in abundance. With “Teenage Dream,” Ben Bogen gave us many reasons to celebrate an early Christmas, wrapping himself in a big, beautiful bow (metaphorically, of course). It’s hard to believe this was his first time presenting a cabaret show. No doubt it won’t be his last.