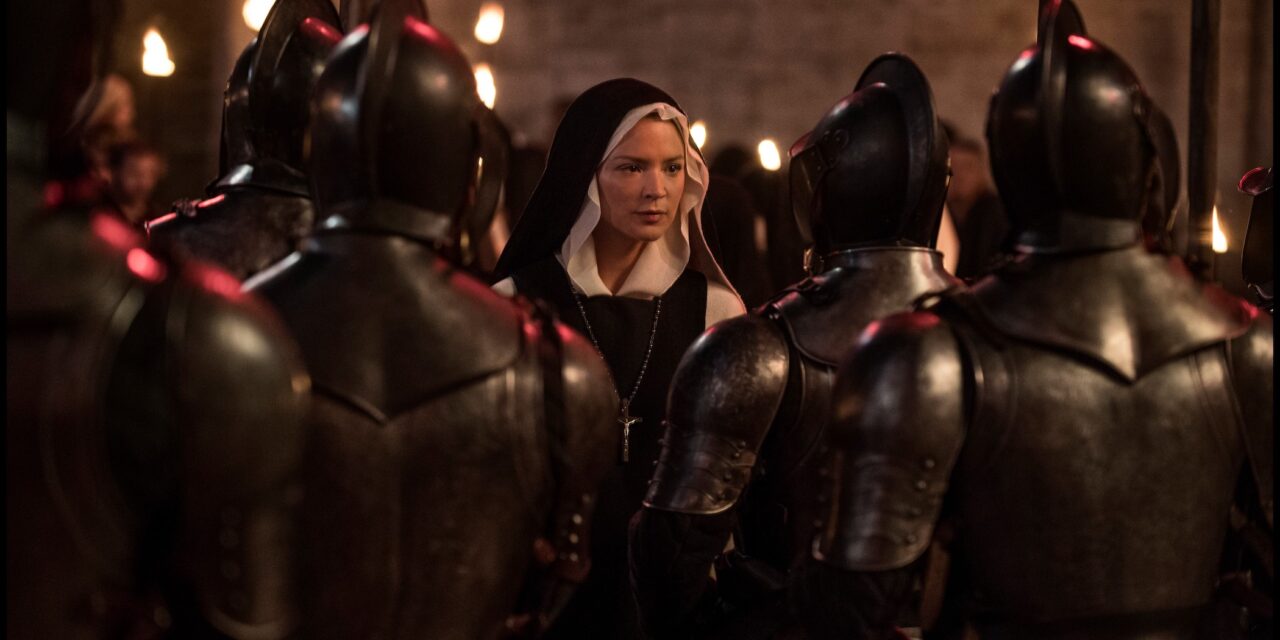 Benedetta, written and directed by Paul Verhoeven (Robocop, Basic Instinct) opening at the New York Film Festival 2021 on September 26th is an epic adventure, loosely inspired by true events that took place in 17th century Tuscany. The titular character is Benedetta Carlini, a nun who at nine was placed by her father in a newly established Theatine nunnery, “The Convent of the Mother of God” in Pescia, Italy. Verhoeven weaves a tale of intrigue, violence and horror in exploring the rise and fall of the eventually disgraced and imprisoned Benedetta.

Because of Carlini’s visions, dreams and stigmata (Christ-like wounds) she was revered as a mystic for a time, until she went too far and made proclamations of her own greatness and even dies and is “resurrected.” The visitations and visions were called into question by officials of the Catholic Church who investigated whether the mysterious events were authentic or were the overactive imagination of a hysterical woman, who enjoyed the power and attention they brought her.

Verhoeven puts extra spin on the Carlini narrative by highlighting her love relationship with another member of the convent, Bartolomea Crivelli, who was appointed to watch over and care for her during Carlini’s religious sufferings and torments. Creating the dynamism and excitement he is known for, the director takes liberties refining and justifying the logical progression of their sexual acts. Verhoeven just stops short of exploiting the idea of two lesbian nuns who are spied upon and caught by the former abbess as hypocrites and liars. The former abbess’ leadership position is given to Carlini because the young nun is more worthy and “the exalted” of God.

What makes Verhoeven’s film an intriguing one concerns how Benedetta’s mystical experiences lift her from the ordinary life of a nun to that of an extraordinary spokesperson almost on the level of creditable Catholic Saint Catherine of Siena. The director intercuts Carlini’s visions with the storyline so that their reality is almost without question.

With the introduction of Bartolomea who seeks sanctuary at the convent to escape the sexual abuse by her father and brothers, it is as if a demonic presence takes hold and gyrates the events in an upward then downward spiral into the terrifying judgment and persecution of the two women guilty of infamous acts during a time when the bubonic plague (God’s judgment) ravages the land.

The elucidation of Benedetta’s visions and likeness to a holy divine with the visitations by Jesus and / or seducing demons, along with the bleeding stigmata, are both mesmerizing and terrifying in the hands of this masterful director. Attention to recreating the elements of the period manifested by the costumes and the interior and exterior set design are superb as is the musical liturgy.

These elements beautifully adhere to take the viewer along a journey of increasing shock and horror that is also at times humorous, especially with Verhoeven’s characterizations of the two women lovers with the innocent Benedetta and the knowledgeable Bartolomea leading her into new experiences with her carnal self.

It is because of the tremendous wide-ranging performances by Virginie Efira as Benedetta and Daphne Patakia as Bartolomea that we become engaged throughout to the conclusion. They rage in their torturings and are authentic in their divinities so that we believe them, yet question their motivations and wonder if what they are doing is truly sacred or profane, and maybe a bit of both.

Helped by the steely, vengeful Charlotte Rampling as the Mother Abbess who Benedetta deposes, and Lambert Wilson as the hypocritical papal Nuncio who comes to investigate then pronounce judgment, Verhoeven rises the emotional tension and chaos to a fever pitch. As the stakes of life and death are defined, and betrayal becomes a necessity, the theme that absolute power corrupts absolutely is brought to the fore.

There is plenty to enjoy in this complicated, symbolic and thematically current film about how to discern lies from truth and how to avoid the manipulation of one’s beliefs toward self-destruction in a dangerous and dark time. If one thinks long and hard about these tortured individuals steeped in their religion so that it entraps and blinds them, one discovers comparisons to our own time. Human nature’s worst traits transcend time and place, certainly, a key theme in Verhoeven’s amazing and thought-provoking film.

See the film to be enthralled and intrigued. Check NYFF 2021 schedules for tickets and times at https://www.filmlinc.org/nyff59-ticket-information/