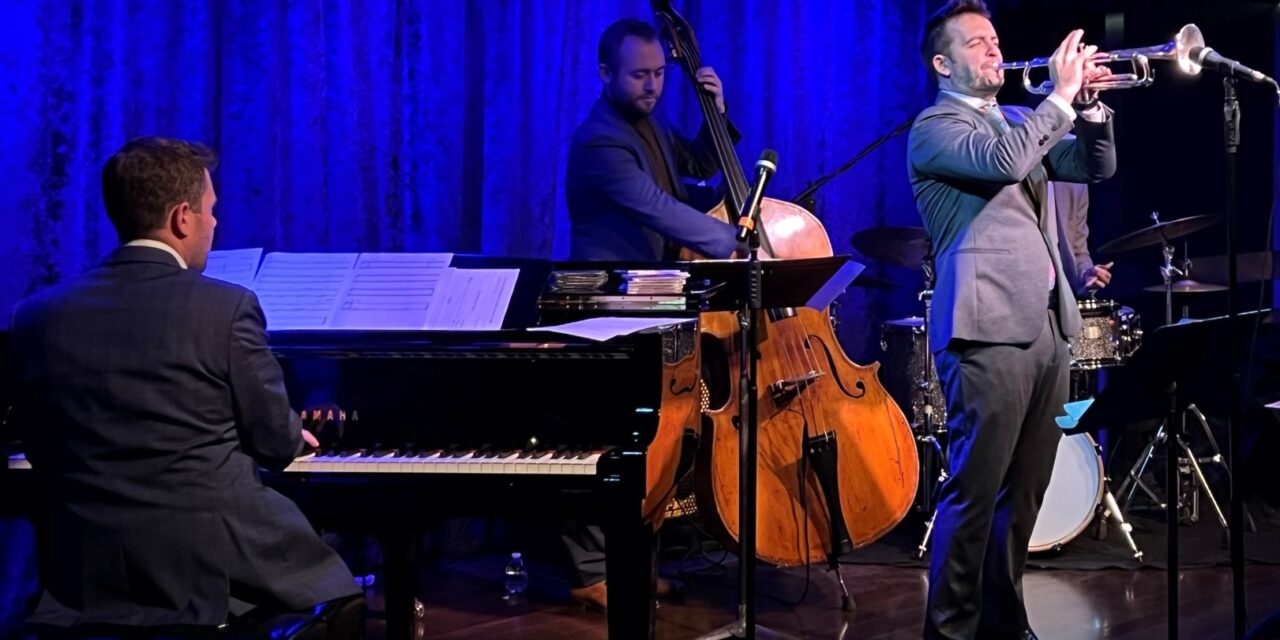 Benny Benack’s last visit to Birdland was the night before the Pause, and this was his first time back.  He managed to gig live wherever he could throughout the pandemic, whether at the semi-outdoor jam sessions at The Craftsman restaurant in Harlem or even at a makeshift stage by Terremoto Coffee in Chelsea.  It’s great to have him back in the clubs.  It was a full house on a cool October night, and Birdland had to bring in a few extra tables behind the piano to accommodate the crowd.

Benny is the third in a line of trumpet players.  His grandfather was known as the King of Dixieland in Pittsburgh.  Benny is also a fine baritone vocalist and songwriter, and with his rugged good looks, great chops, and an ability to croon, as well as scat, he seems like a hip cousin to Harry Connick, Jr.  He is simultaneously charming and self- deprecatingly funny.  He was backed by three excellent musicians, pianist Steven Feifke, drummer Joe Peri, and bassist Mark Lewandowski.  These 30ish jazz cats are best friends who all lived together a few years ago, like a kind of jazz Beatles, before the other three found love and marriage.  This close relationship and history together made for a tight ensemble with excellent, creative choices.

Benny, wearing a snazzy gray suit with a pink and blue tie, opened his eight-song set with “A Lot of Livin’ to Do” (Charles Strouse/Lee Adams).  Benny explodes with joyous energy in his performance, and he puts his full body weight behind his horn.

Benny’s first original of the set was “Jade,” a beautiful song with a bossa beat that was the equal to a Jobim tune.  When Benny sang “I’d find my Jade,” you believed him.  Steven Feifke, an exceptional accompanist and soloist, used elegant whole notes to frame the melody.

Feifke’s long intro with inventive, haunting voicings was an imaginative and unique start to “Pure Imagination” (Leslie Bricusse/Anthony Newley).  After Benny sang through the lyrics the first time, Feifke’s Gershwin-like chords transported the listener into Wonka’s world, and his solo perhaps best appreciated with eyes closed.  Benny continued the mood with a bright trumpet solo.  One the final round of the song, drummer Joe Peri switched from a light swing to a bebop syncopation that made it feel, as the lyrics suggested, like anything is possible.

Benny’s next original instrumental, “All Warmed Up” (a contrafact based on Irving Berlin’s “I’ve Got My Love to Keep Me Warm”) included cool unison playing by Benny, Feifke and Lewandowski. His vigorous solo had shades of “Flight of the Bumblebee” and Harry James’ “Ciribiribin.”  Feifke and Lewandowski traded piano and bass solos like a conversation between two excited friends, and Peri had his shining moment here, with strong rhythms and ferocious energy.

Benny wrote a love ballad for one of the only women he’s ever loved – his 18-year-old Yorkie that died during the pandemic, Giselle.  “Giselle,” though literally about puppy love, has the feel of a love song that could have been written during the days of Tin Pan Alley (which was celebrated earlier that day, October 23, opposite the Flatiron Building with a four-hour public festival).  It rivals Paul McCartney’s paean to his dog Martha on The Beatles’ “Martha My Dear” as best canine love song, and has the makings of a future jazz standard for singers. Benny sang it with sweet sensitivity, clearly wearing his leash love on his sleeve.

Benny’s third original composition, “My Wish List is You,” an early Christmas present from his upcoming nondenominational holiday album, is a clever, catchy tune that will put the new CD on many an Amazon Wish List.  Benny’s last album had an untimely release just prior to the pandemic, he wryly noted, and he stayed around to sell and sign CDs after the show.

For the bossa nova classic “Girl from Ipanema” (Antonio Carlos Jobim), Benny invited special guests Adam Rose to play piano and Alex Claffy to take over the bass for a jam session.  Benny noted that these “cats” often play jams at two or three clubs a night with him in Harlem, then downtown, and “there’s always a midnight set somewhere.”   Here, Benny played a brief quote of Jobim’s “Desafinado.”

The final number saw a bit of a mad scientist at work, a mashup created during Benny’s pandemic experiments \ wondering what would happen if he took the Back Street Boy’s “Everybody” and played it in an Afro-Cuban beat.  The result was “Backstreet’s Back,” a fun, raucous kitchen sink of 80’s pop and jazz, and was surprisingly effective as well as funny.