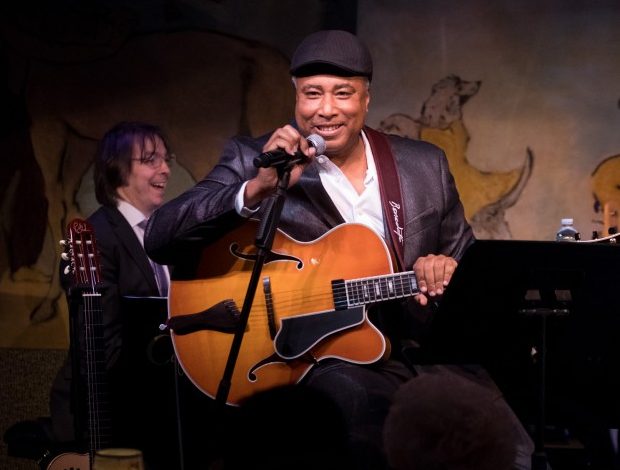 What do you do after winning four World Series titles, playing five All-Star games, winning four Gold Gloves and being voted league MVP (among other accolades) as one of the most beloved players for one of the greatest sports franchises in the world? How do you top it? Well, if you’re Bernie Williams, former New York Yankees star (1991-2006), you play the most prestigious supper club in New York City, the Café Carlyle. Showing his prowess as both a team player and a breakout performer, Williams and his band (The Bernie Williams Collective, he called it, perhaps jokingly) demonstrated what a world class second act looks like Tuesday night at the Café Carlyle, where they’ll be playing the remainder of the week. Williams is no novice. He’s been playing music his whole life, and used his guitar as a means to keep him focused and calm during his storied baseball career. (Baseball commentators frequently mentioned Williams’ incessant guitar noodling, though in a slightly cajoling manner, but cited it as a possible source for his ability to come through in the clutch again and again.) As he introduced “Desvelado (Sleepless)” he told the audience how he would play this song when he couldn’t sleep, worried about the next day’s game when he would be facing “Pedro Martinez . . . or, oh man, Roger Clemens.” He shudders at the thought of standing before the menacing, nearly 100 mph fastballs of the rival Boston Red Sox hurlers who would’ve just as soon plunk him on the arm to back him off the plate as strike him out. He had a statistically high percentage of winning those showdowns, so apparently the music helped. He’s an entertainer who can handle pressure, so it was no surprise that he strolled to the Carlyle stage almost nonchalantly wearing a fashionable dark blue blazer and a blue cabbie cap, picked up a guitar and began playing one of his original compositions, “African Blues,” a mellow, but visual instrumental jazz number that felt like it could be the soundtrack for a film set in New York City. After the first song, Williams acknowledged some jitters, but teased the crowd, “You all know I can’t see you, right?” Here was a lighter, more ebullient Bernie Williams than the one known to baseball fans, who saw pure seriousness and pure professionalism in his furrowed brow and narrow, determined eyes. Not so on stage. His chemistry with his band belied his skills as a team player. His very excellent percussion section (Joel Rosenblatt on drums, Dave Anderson on bass), intricate pianist Chris Clark, and superb music director/trumpeter Don Harris were an ensemble force. While all the numbers were ethereal instrumental jazz, Williams excelled in particular on the many salsa-inflected songs like “Que Rico el Mambo.” Most of the songs were Williams’ from his 2009 album “Moving Forward,” but the band slipped in a cover of the emotive and gorgeous South American-accented, “Fragile” (Sting), which was simply divine. Williams was arguably one of the best center fielders in the history of baseball and played the game with a surgical precision, demonstrating remarkable focus and stayed away from headlines, salacious and otherwise. Baseball was his first job in life, and just like someone who has ended a first career to indulge their passion for, say, gardening, his smile betrays how ecstatic he is to be playing music. It’s his life’s mission, he’s indulging in it, and he couldn’t be happier. And it shows in his polished, passionate performance. But, America’s past time still looms large, and he clearly still has a love for the game. After a beautiful set, the audience demanded more and Williams returned to the stage alone, picked up his guitar and began playing a pretty little twinkly piece that slowly morphed into our runner up national anthem, “Take Me Out to the Ball Game,” (Jack Norworth and Albert Von Tilzer) much to the delight of the equal parts baseball and jazz-loving crowd. Quietly, a few beautiful voices rose from a table in the back (a table of women whom I’d bet were, coincidentally, professional singers), “. . . buy me some pea-nuts and cra-cker jacks . . .” It was simply the most beautiful version of that wonderful standard I’d ever heard. What a way to end a show.