BETTY BUCKLEY AT THE CAFÉ CARLYLE 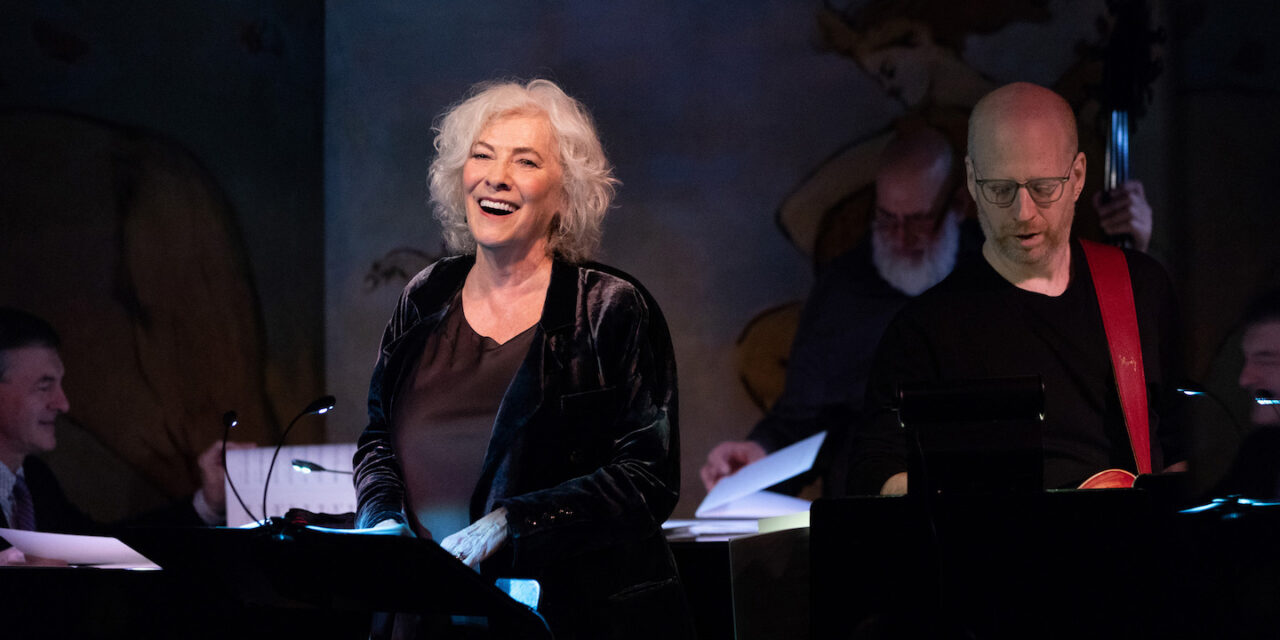 Early on in her spectacular new show at the Café Carlyle – shortly after spot-on renditions of Sting’s “Fragile” and Stephen Sondheim’s “Not a Day Goes By” – Betty Buckley lets us in on a little secret. Her initial idea for this set was to be based on her version of what romance means, but she quickly decided that would be just too dark for any of us to take.

The statement is said with a laugh, but knowing Buckley for many decades, I know she’s not kidding. I also instantly think I’d probably really love that show – but luckily, I end up loving this one as well, in which she thoughtfully explores various angles of romance by stunningly using songs from the Great American Songbook, Broadway and, best of all, the pop canon. It’s no wonder (or surprise) that her penultimate song – a closing statement, if you will — is her idol Joni Mitchell’s “Both Sides Now,” which she serves up with gorgeous precision.

Backed by one of the best trios in the business – pianist Christian Jacob, bassist Tony Marino and percussionist Jamey Haddad – Buckley proves over her 75 minutes that not only can she sing any genre, but that her voice still has enormous range, from an ethereal soprano to a full-out belt, with both being utilized sometimes in the same number.

She can be movingly sardonic, as in the show’s finest number, a blistering rendition of Bob Dylan’s “Don’t Think Twice”; sweetly philosophical during Abbey Lincoln’s “Throw It Away” ; or playfully funny, as when she asks singer-pianist Seth Rudetsky to join her in Stephen Schwartz’s almost-saccharine “Love Song” – just so she can show off the one piece of “choreography” that Bob Fosse gave her when she starred in Pippin.

Knowing her audience, Buckley takes a traditional approach to Rodgers & Hart’s “My Romance,” Jerome Kern, Oscar Hammerstein and Dorothy Fields’ “I Won’t Dance,” and Johnny Richards and Carolyn Leigh’s “Young at Heart,” delighting those who count on hearing their favorite standards done to perfection in this elegant boite.

Personally, though, I often count on Buckley to introduce me to songs I don’t already know, and this set is no exception – from Paul Simon’s 1983 story song “Train in the Distance,” about the ups and downs of a married couple and the universal belief that life can (theoretically) always be better than it is, to Jensen McRae’s haunting “Wolves” – just released this year — about how women’s personalities and behaviors can be permanently altered by encounters with abusive men. (It’s a doubly fitting choice as Buckley now recurs on NBC’s Law & Order: SVU).

Old and new. Light and dark. Up and down. Betty Buckley knows what she’s doing, and, as usual, does it better than almost anyone in the business!