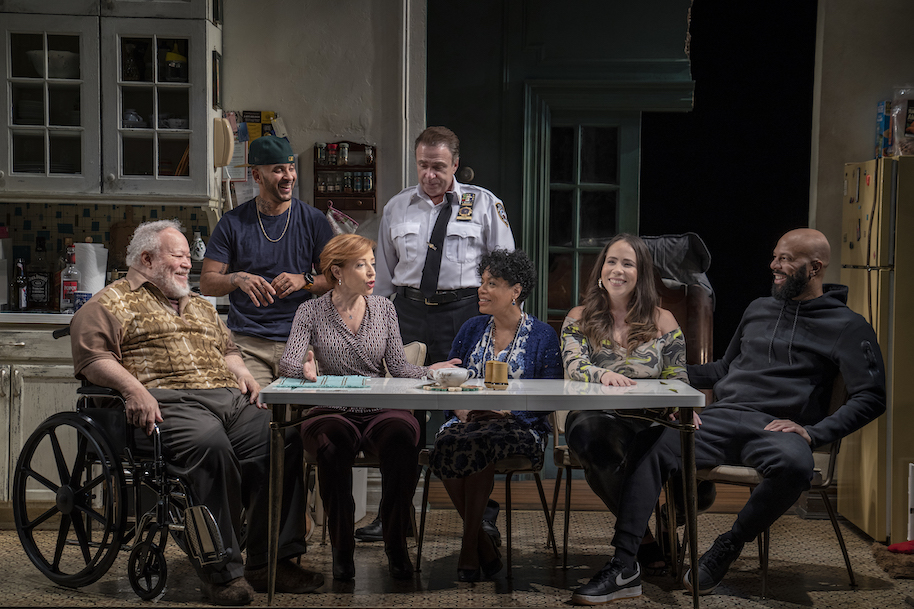 If you think King Lear had problems with aging, wait till you meet Walter (“Pops”) Washington.   He’s the larger-than-life protagonist in the rousing revival of Between Riverside and Crazy, Stephen Adly Guirgis’s heartfelt Pulitzer Prize winning 2015 contemporary comedy-drama now playing on Broadway.  Given Stephen McKinley Henderson’s mighty performance in the role, Washington is the embodiment of the poet Dylan Thomas’s exhortation: “Do not go gentle into that good night.”

Pops (as the other characters call him, whether he’s their father or not) has cause for rage.  A veteran of NYPD, he was shot eight years ago in a dispute with a white policeman, and forced to leave the force.  His landlord has been trying to evict him from his spacious rent-controlled apartment on Riverside Drive.  As for his personal life, his beloved wife Dolores died, and he can’t seem to get out of her wheel chair.  He’s perched on it throughout the play like a throne of anger.

Walter holds court in a cluttered kitchen (one of the rooms on Walt Spangler’s impressive turnstile set of the Riverside apartment), surrounded by a motley assortment of souls whom he’s taken in.   They include his son Junior, an ex-con (played by Common), who is running some kind of illegal business out of one of the rooms in the apartment.  There’s Junior’s girlfriend Lulu, who also resides there and who allegedly is studying to be an accountant, although a dubious past is suggested.   Junior’s friend Oswaldo, a drug addict to whom Walter has given shelter, completes Walter’s menagerie of misfits.

When Walter is visited by his former cop-partner Audrey (Elizabeth Canavan) and her fiancé Dave (Michael Rispoli), that’s when the action gets going.   Their mission is to convince Walter to take the NYPD’s long-standing settlement offer, which he steadfastly refuses to do despite their begging and pleading, warning that he’ll soon be penniless and homeless if he doesn’t.  But “Howl, howl, howl” (King Lear again) is all that Walter is prepared to do – raging against the injustices of a hostile world that he perceives is conspiring against him, including the real estate establishment of New York City, plus his lawyers Lubenthal & Lubenthal (yes, there are anti-Semitic comments), and above all the white establishment of the NYPD.  (He throws in a lot of profanity with the howling, too).

An improbable catalyst of Walter’s statis appears in Act II in the form of “Church Lady”, who makes weekly visits with the purpose of saving his soul by convincing him to take communion (he hasn’t yet).  As it turns out, however, she’s not the actual Church Lady, but rather the church cleaning lady, who is substituting for her boss’s weekly visit and is intent on saving him.  Moreover, the kind of “communion” she ultimately offers – well, that’s the hilarious high point of the play and the instrument of change.

How Walter changes will surprise you.  What underlies his dramatic choices, however, has to do with the play’s fundamental theme – about the human capacity for self-destruction and ultimately for self-salvation.   As we discover, Walter is not the innocent victim he makes himself out to be.   Yes, it was a tough time for a Black police officer in the 1970s when he started, as he bitterly recalls.  Yes, he was shot six times by a white policeman – but when he recounts the injustice, he omits the facts that he was off-duty, drinking in a bar. He provoked the policeman into a violent altercation, and later told lies that the other cop called Walter a racial slur.  As for the claim Walter has made against the NYPD, he’s refused to settle so many times that he’s lost the most favorable terms.  As for his apartment, he’s helping his landlord’s case to evict him by providing a home for addicts (as well as his son, who is still engaged in illegal activities.    As for his friend, his long-time partner Detective Audrey O’Connor who would do anything to save him, Walter not only dismisses her, but also shows her the extent of his capacity for meanness.

Ultimately, the power of Between Riverside and Crazy lies in playwright Guirgis’s ability to portray characters that earn our empathy and affection. For Guirgis, there is no such things as a “flawed” character; rather, they are full-blooded, rich and complex, full of contradictions, able to do good and bad to themselves and others.   Their humanity is affecting, and under Austin Pendelton’s skilled direction, the entire cast shines in their portrayals.    As Pops, Stephen McKinley Henderson gives a titantic, Lear-like performance – featuring a jumble of contradictory features including bigotry, cruelty, generosity, tenderness and love.  Victor Alamanzar is a lovable addict who counsels Pops on eating healthy; Liza Colon-Zayas (who originated the role of Church Lady) is simply priceless.  Junior (played by Common, the celebrated Emmy and Grammy-winning artist and activist) makes his Broadway debut with a touching, convincing performance as Junior, Pops’ ex-con son who is struggling to redeem himself from his past.

Between Riverside and Crazy opened at the Atlantic Theater Company in August, 2014, and transferred to Second Stage’s Tony Kiser Theater in February 2015. (Henderson, Colon-Zayas, and Almanzar were in that original cast).   The current, splendid Broadway production marks its Broadway debut.

Walter “Pops” Washington, a deeply human portrayal of a contemporary Everyman, is the playwright’s towering achievement.  He’s the embodiment of the expression: “Hate the sin but love the sinner.”  You’ll love him, you’ll hate him, but in the end, you’ll admire his path to redemption.